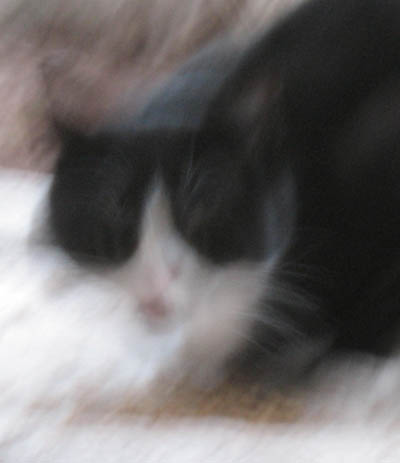 The yin yang of nature and the universe has once again proven itself. After losing Blackberry to an unknown demise about a month ago, another has taken his place...sort of...or is trying. The elusive "BW" [Black White] has been roaming the farm for a couple weeks, in tact with devises that can make kittens in multiple doses. I will need to trap and neuter him, which will prove difficult, as putting out a trap will more than likely catch a variety of critters - Mlle. Le Pew perhaps, or a hungry and naive Little Orange. But it needs to be done.

The poor fellow appears to have been dumped. On the first sighting, his coat was shiny and clean, he was fatter. He now is thinner, has a gaping hairless patch on his jaw, a fight I'm sure, and his coat is duller. I think I can tame him up over time. But first he must be neutered. I hate trapping, it's traumatic for everyone, including me, but in the long run, it might save his life, as he won't stray as much.

So, I am having a raffle to raise funds to raise funds for the eventual neutering, along with possible med needs. Last month's Last Chance sale was very successful - over 60 pieces were sold out of 100+ pieces, so it really helped clean out the file drawers - or in my case, boxes on the floor. So now, you can enter the raffle for as little as $30 and win over 30 old illustration pieces of days gone by. It's a win-win situation, you help me help an animal, and in so doing you have a good chance of bringing home some little art pieces for yourself or, dare I say, holiday gifts. Visit this link for details and to enter, as well as see the images of all the art you can win . Pass the word around too. And thank you.
Posted by Katherine Dunn/Apifera Farm at 9:43 AM

ohhh I wish you good luck with BW!