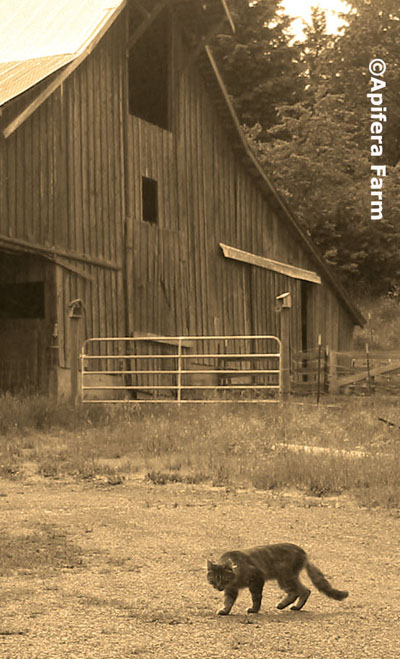 In which the reader is reminded that creatures and nature have their own paths, and it doesn't always include us humans...

I have resisted writing this entry, as I thought that by not writing it, perhaps the truth can be avoided. But after 7 days, I have to face facts that the tiniest member of Apifera is not going to return. Sweet Pea was of the first litter, born to Mama and one of five. She was a runt, and the most feral of the bunch. She was also the most aggressive hunter.

She must have weighed no more that 5# her whole life, which only numbered four years. She remained independent, but in the past year, began to relax, and tender up to me. Every morning when I would walk to the barn for feedings, she would be the first at the gate, and would roll on her back. I'd pick her up in one hand, and say the same thing, every morning...."Good Morning, Sweet Pea....who's the smallest one on the farm?"...Squeek, she'd jump down and run to the hay barn. Sometimes at night feedings I'd say, "Sweet Pea, did you get any smaller?"

I always assumed she would not last that long, as she was so small. Four years is a good life for a semi feral. And she had a barn and a tribe. She never suffered through having her own litter, and heaven knows those kittens would have killed her. So she did okay.

But I was saddened when I realized she hadn't been at breakfast for two days. I'd been busy doctoring Phinias, and Ward, and sort of didn't notice. But the energy had shifted, and I knew it was a bad sign on day three. Still one hopes. You torment - or my imagination does - about what happened. Did she suffer? I suspect it might have been raccoons that she tangled with - we heard a big fight the other night and she might have run into mother at the wrong time.

This morning I thought, well, if I write a blog entry on her, won't I feel silly when she shows up tomorrow? But my written words don't have that magic in them. For the past week, I have asked neighbors to be on the lookout. And I asked Pino, "Have you seen her, Pino? Surely you know where she is." But this isn't "Wind in the Willows". Moles and otters and rats don't rush into the woods at night to find lost animals, and succeed. It's just a real place, a real farm, and things die.

Death just keeps coming in waves, just like birth and life. You have to catch the high wave, keep your balance, don't look down too much. Eat as well as you are able. And don't worry to much about the cracks in the ceiling.

So we all say, "Hail, Sweet Pea! The tiniest member of our farm!"
Posted by Katherine Dunn/Apifera Farm at 5:03 PM

Godspeed, Sweet Pea, wherever you are.

Thank you for the perspective, Katherine.

K - although it might not be "wind in the willows" I do get a sense that it is while I read your lovely blog. I'm sorry that Sweet Pea hasn't come back. I'm sorry your imagination goes crazy with what happened. My heart goes out to you and all your loving creatures.

I am so sorry Katherine....I had tears before coffee reading your loving tribute to Sweet Pea.

Dear Katherine, i hope against hope that you do see Sweet Pea again. Whenever i read about your cats, and you mentioned Sweet Pea being so small, it remineded me of my Seraphim.She was the tinest cat, a rescue, and the crankiest of cats. She was my cat, wanted me to pet her and hold her, but only her way, on her terms. One day she didn't come when i called for her for supper, and that didn't raise a flag, because she was so moody and on her own terms. But the next morning when she didn't come for breakfast, i started searching for her and found her little body curled up on the old highchair in the basement,looking like she had just fallen asleep. You know, every once in a while i see her in this house...a flash of orange or a creaking on the stairs. I like that she is still with me, in her own way, of course....

I'm so sorry Sweet Pea has not come back. I share your sadness and worry. Sounds like she had a wonderful short life on your beautiful farm. It is just always hard to say goodbye to our little creatures.

Thanks, everyone - oh it would be so much better, even though sad, to find her curled up in a chair. Much better to lay them to rest to return to earth with us knowing they safe with the worms. Alas....

Katherine.. I am sorry for your loss. Just because death is a part of life does not make it any easier.

Oh...I have known this too many times...and me in the city in Calif!
We still have coyotes, hawks & raccoons, and have lost too many cats
to numbers...all I can ever tell myself is that I gave them a good life...so sorry for you!

I am so sorry for you and sweat pea