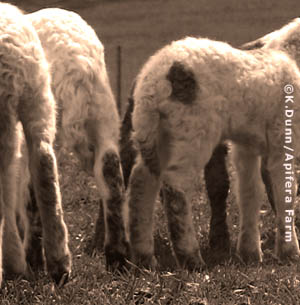 With the first day of spring came sun, warmer breezes, and lots of gangly legs running in the fields. It made me happy. I spent time picking names, a task I take quite seriously. It seems this year more than ever the lamb names must carry them into their lives with proper weight, proper joy mixed with respect.

Of Blues two girls, I have named the little chocolate one Little Rosalita, aka Rosie, in honor of her great grandmother Rosie. This little girl is adorable, small, but very much a ring leader in espionage in the field.

Blue's other girl is white, and has a face right out of a classic lamb image from yester year. I almost went with Bo Peep, but I am sticking to our original theme of always picking plant names for the sheep. This gets to be a challenge. So I settled on Dainty Bess, aka Bessie.

Of Lilly's two girls, I named the large one Bouncing Bet, as I feel calling her Betty will fit her stance and personality. She appears to be the leader, and was the first of the four girls born. Her sister is slightly smaller, and a bit more girly, so I'm going with Meadow Sweet, aka Sweetie.

The two boys remain Weeds - if we keep a ram for our breeding program, I name the after a weed, such as our Joe Pye Weed. But some are sold for stud, and some are Chosen Ones,providing us with food. This is a difficult subject for many, but it has been well thought out by myself and Martyn. We do not take it lightly, ever. Raising some of our food is a choice we make consciously.

I will use these names and see if the proper connection is made as the letters roll off my tongue. Sometimes it seems, another name presents itself unexpectedly, and one must honor it. I was almost named Bridgette, with Mary second on the list. But my father's mother died several hours before I was born, and I was named in her honor. It is a connection of importance for me, even more so as my father has died. A name, only a name, but it holds people lives in it's vowels and consonants. I thought about him during all our lambing hardship these past weeks. He was a 30 year old man, his wife was about to have a baby, and his 57 year old mother collapses, dead, on a city street. The yin-yang of that day for him, I can only imagine. One year ago today, my father died. His death, her death, it all seems wrapped up into the events of losing Rosie and Coral, and the babies.

Spring brings tender grasses, felt by the feet of young lambs, as they rush and skip through brown leaves of months gone by.
Posted by Katherine Dunn/Apifera Farm at 7:24 PM

Excellent names! I like it that you name your sheep after plants. We just named our new Jacob lambs after black and white things, for the first two - Panda and Penguin. The third one became Pennyroyal.

I hope you will stop by my blog to see our unexpected new baby today. A black baby donkey from our rescue girl, Willow. We had no clue she was pregnant (nor did the shelter she came from!) so it was such a surprise. His color is very unusual I think. We are working on a name for him as well.

It seems odd that the season of birth can be filled with so much death. I ended up having my cat put to sleep earlier this week. It is good to come here and read about skipping lambs being named.

hi - i haven't visited in a bit and am now crying in my living room reading some of the entries to my husband. I'm so sorry that you lost Rosie and her only boy. But like you said you have other healthy lamb and it is part of nature, the strong survive. You did have a very hard 8 days though and the little chocolate boy of rosies had 7 days of love.

It is so evident that you are a warm and caring person. The time you spend picking names so they have meaning is so beautiful. I love the little picture of the lambs legs. I hope to see more pictures of them.

Kathryn, sometimes I marvel at life. When I can sit and listen to the lessons it teaches, the wisdom it is my responsibility to absorb. I honor this day with you and mark it as the passing of one of your great teacher's. An anniversary as such is a reflection, a celebration of the life of this teacher, your father. I am glad you are in such a quiet place with creatures around to help you understand the lessons. hugs to you.

Thanks for stopping by everyone. Sometimes life lessons hit you over the head and knock you out a bit. Guess these lessons have felt like that. But, spring is here, and we are surrounded with much to be happy for.