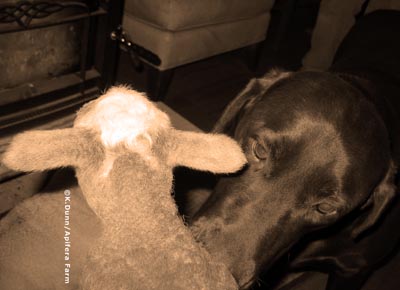 Yesterday at 1pm Rosie's water broke. I assisted her a little bit easing the first lamb out, but things went ok for her. The first lamb was presented properly, but sadly she was stillborn. I even gave her mouth to mouth and a heart massage, but she was long gone. The second lamb was alive, a big chocolate boy. He was a lot less stable than a lamb should be, but he was alive. The third lamb, a girl, was also still born. Rosie licked her boy the best she could, but was very weak. I helped with the drying and cleanup. She had no milk to give, a little in one teet, but she was unable to stand. I knew I had to do my first foray into 'tubing', where a small catheter is pushed down to the lamb's stomach. The vet had given me a crash course, and now was my big debut. And I did fine, I was so relieved. [For the non shepherd out there, it's crucial to get colostrum in the lamb within 30 minutes]. 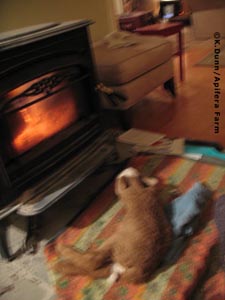 I wrapped him in warm towels, but within 20 minutes knew this wasn't going to do for him. He needed a fire to get his body temp up. Within an hour of bringing him in the house, I was able to warm him well. We need to keep him in the house until he can really stand well, and he's way behind on that score. Most of our lambs are up and atom within 20 minutes or so. This little fellow can stand as of this morning, but can't walk real well. We all sat around the fire into the evening, and I finally was able to drink a couple glasses of good wine since I wouldn't be trekking to the barn every hour. I had done all I could for Rosie, and could only wait to see how she made it through the night. Huck and Billy were wonderful nurses, licking the lamb through out the night. I figured this was good for him, since he missed it from his mother. Huck has this expression all the time now, like, "Is the baby up? Should I help with the baby?" 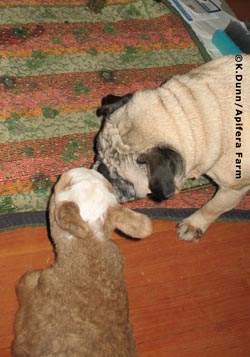 Since the little guy wasn't walking, and he needed feeding every 2 hours, I slept on the floor and had him at my side on his mat. What a sweetheart, he slept well all night. I fed him him every couple hours. He'll need TLC for awhile, and I really hope we can pull him through.

This morning, Rosie was on her side, not good. I revived her a bit with her calcium shot, and vitamin injections and her energy cocktail. She's very weak, but is not in the pain Coral was, probably because there was no damage to her uterus. She appears very depressed. I've been giving her massages, and she is in an area where her little 4 day old granddaughters sit with her, and frolic around like kids too,, unaware of the seriousness of her condition. In the nearby stall, with window access, is Blue, Coral's daughter, who is in labor as I write. On the left of Rosie's stall is Daisy, her daughter who is about to lamb too. AS I nursed Rosie this morning, it reminded me of days of old, when we human families took care of our dying, but allowed life to just perk a long too. This is how one should die, I thought, in their own element, with the smells, sounds and beings around them that they know.

I'm tired. I want to twitch my nose and make my old flock come back, healthy. I've learned so much, and there is more to learn. I'll fight for Rosie until it's over, and maybe with luck, we'll win the fight together. But she's very weak, she gave that one baby boy everything - so he is very special creature.He must have stories to tell me, or nature would not have given him that first breath.
Posted by Katherine Dunn/Apifera Farm at 11:59 AM

Email ThisBlogThis!Share to TwitterShare to FacebookShare to Pinterest
Labels: Hospice work, Life on the farm, Rest in Peace, Sheep of Apifera

Oh Katherine,
How wonderful to be able to give life to a baby lamb that way. But I'll bet you are exhausted. I am sorry about to 2 little stillborn babies but hopefully little "cocoa" will be strong and healthy as the days go on.

I admire your gentle but realistic farmer ways. And how sweet your nursemaid dogs are. I hope the rest of the lambing goes smoothly.

Katherine, it's so wonderful and amazing that Huck and Billy are helping with the baby boy. I'm still pulling for Rosie - lots of love to you all.

Blessings to you, to dear Rosie (a name dear to my heart because of my rescue chicken), to Blue and her soon-to-be lambs, and also to your new baby boy. He looks beautiful. I would name him Nyambe, after the god of African myth - he is the god of regeneration in Nigerian legend. Perhaps this lamb will help regenerate some of what you have lost.

My goodness, you have been going though it. I will be pulling for you and your flock.

I hope momma pulls through. I don't understand why the sheep are having so many twins and triplets.

I'm glad you brought baby inside and hope he grows into a beautiful ram.