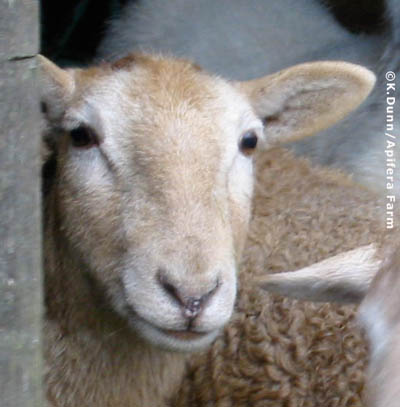 I was with her when she was born, and I was with her as she died. She was five years old and had given us 6 healthy lambs in the past 2 years. She was daughter to Rose and Joe Pye Weed, and was head-ewe-in-waiting. A real loss for our farm.

Coral Bell had suffered enough, and was euthanized today at 12 noon. The vet came and immediately agreed she was in constant suffering, and was not going to recover from her ordeal. She also most likely had a torn uterus and liver damage. I spent 2 hours in her stall last night, and pretty much thought she would be dead when I came out in the morning. But she was still hanging on, groaning with every breath. It was gut wrenching to watch.

I let Audrey, her 2 year old daughter, and mother-to-be any day, come in the stall this morning. She sniffed around Coral, and then casually left. Coral had not bleated since she went down on Thursday, but when Audrey left the stall, Coral turned her head, obviously painful, and let out a very weak bleat. It was beyond touching.

We will bury her next to her three triplets on the lavender hill.

In the meantime, the vet induced Rosie, and has hopes for her recovery. We will hope too. He also gave me a big, kind pep talk which I greatly needed.

Some crusty old guy once said to me, "Life and old age aren't for sissies. Neither's farming."
Posted by Katherine Dunn/Apifera Farm at 2:09 PM

Email ThisBlogThis!Share to TwitterShare to FacebookShare to Pinterest
Labels: Hospice work, Life on the farm, Rest in Peace, Sheep of Apifera

Oh Katherine, I am so sorry. You gave her such a life, such love, and care, and kindness. You made her all of ours through your words, your images, dreams and tears. I know all of us grieve with you, but know we will hear of Coral Bell again. Who better to tell her story, to bring her forth in word and drawings when it is time for her story to be told. And who better to tell us all but you.

I'm so sorry she suffered and glad you ended it. I haven't read what was wrong with her, but I'm sure she knew she was loved.

I had to make that decision for one of my beloved dogs three weeks ago. It's never easy.

Oh no, I'm soooo sorry. She looks like she was a beautiful girl. My sympathies to you.

Oh Katherine, I'm so sorry for your loss. I know what a special place Coral has in your heart. I'm sure you were just as special to her.

Your vet sounds like a kind, caring man and I'm glad he gave you some comfort. If you didn't have such a big heart it wouldn't be hurting now. Coral was fortunate to be part of Apifera farm.

I am so sorry. I wish I had the right words to offer you---but just know that I am thinking of you and that my heart goes out to you and your wonderful little farm family. :(

Katherine, I'm so sorry again. I thought about Coral at work today and just got home--not the update I was hoping to hear. What a very sad series of events for you. She's happy and healthy again now.

You must be both relieved and saddened by this turn of events. I am so sorry for your loss. I am glad she is out of her misery though. I am glad Rosie is progressing too. I'll say a prayer for her and her little ones to flourish. Hugs to you Katherine

I'm so sad about this, and I hoped she would pull through. Maybe the spirits of her little lambs needed her with them, more than she was needed here with us. There is always a reason. I send you a hug to wrap around your whole farm, and a special pat for Guinnias.

I am sorry for your loss. RIP beautiful Coral Bell.

Hi, I'm so sorry, I read your post the other day and hoped with returning it would be a happier ending for Coral, and for you. Its really lovely that she was so loved.

Boy, that was hard to read. I am so sorry.

I'm sorry Katherine. Coral Bell was well-loved and shall always remain so. Sending comforting energy to you and much love for all at Apifera.

Goodness, you do know how to make a woman cry in the morning! Life is such a dreadful mix, isn't it. I feel for you in this weird and terrible learning curve you've been on. You are right she's no longer suffering and that's something. A big thing. Best wishes.

Hey Sweetheart! The crusty old guy was a softie too, under the crust - the only reason he knew what he was talking about is that he'd had his heart broken many a time too. It's hard, but it's good. Hang in there ~ comfort when you can, let go when you have to.

All we can do, is the best that we know how for our beloved animals. I know that all of yours have that.
Coral, you have done your job, now you have sweet rest, with your babies at your side.