Apifera hills made from elephant wings 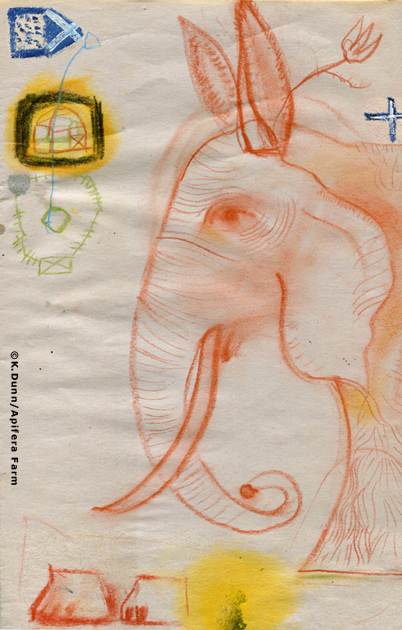 I am lucky to receive an annual art mailing from someone each Earth Day. This year the theme was elephants.

I have always loved elephants and feel a kindred sadness with them. Their annihilation is particularly heartbreaking especially since they form deep relationships with their mates and herd. When I first moved to Portland from Minneapolis, prior to becoming the female half of The Pre-Dirt Farmer, I went to the Oregon zoo and naively walked into the volunteer office, explained I loved elephants and wanted to work with them somehow. The woman behind the counter said very authoritatively, "No one volunteers with the Big Boys."  I  tucked my thoughts on elephants in my back pocket, temporarily.

After reading more about elephants from my friend's art mailer, I was delighted by the fables that elephants had wings at one time but they were so heavy bodied that they fell out of the sky and scared other animals. One fable has them renouncing their wings to settle on Earth, and when they did, millions of wings fell to the ground, the snow covered them and that is how the Himalayas were formed.

If donkey wings formed Mountains there, I'm sure some floated West. Everything floats West sooner or later. I've convinced myself that the slopes of both Donkey Hill and Muddy Hill are the result of fallen elephant wings.

I know I can not have an elephant - for starters it would definitely go against the Apifera Animal Acquisition Law which has only been broken maybe once or twice...okay, I can't count how may times it's been broken. But if I can't have an elephant, I can call on elephants when I need extra guidance or compassion. The characteristics of elephants are much like a donkey- loyal, alert, compassion for the herd, long memory, trusting, longevity, and wisdom. Look into the eyes of an elephant or a donkey and there are old souls with stories.

I will sit on the hills and imagine the large wings under me, holding me up. My elephant will have four ears though, two being donkey like - imagine how big they would be - the thought of it pleases me greatly.
Posted by Katherine Dunn/Apifera Farm at 5:56 PM

I loved this, Katherine. Combining your love of donkeys and elephants is perfect.

The donkey ears look perfectly natural on that elephant. I think you've stumbled upon an undiscovered evolutionary branch!

I've been reading your blog for some time now & love it. Your post made me think of one of my favorite CDs, which I think you might enjoy-- "Hidden Sky" by Jami Sieber. She plays cello & is accompanied by the Thai Elephant Orchestra. The elephants are not trained to play specific tunes, they are allowed to improvise. You can read the story of Jami's experience with the elephants here--
http://www.jamisieber.com/discography/hidden-sky
You can listen to the entire CD for free on Magnatune (which is where I first heard it)-- http://magnatune.com/artists/albums/sieber-hidden/
Of course, I will not be held responsible if you should suddenly get any ideas about an Apifera Donkey Orchestra!
Lyn

Lynn, that music is haunting and beautiful, sad...Thank you for sharing it. I had read about a sanctuary that set up an art camp for its sanctuary elephants to paint and they found they really liked to play and express in paint. Sadly, I guess there were zoos that took advantage of the idea and turned their elephants into money making gimmicks. It doesn't appear this elephant orchestra is the latter, and they are expressing themselves freely.

Katherine,when I retire it will be to a place where volunteers are allowed to work with the "Big Boys". It does not surprise me to learn that the plight of the pachyderm touches your soul - mine as well. I am sending you something very soon.