Fishing trip for a pig 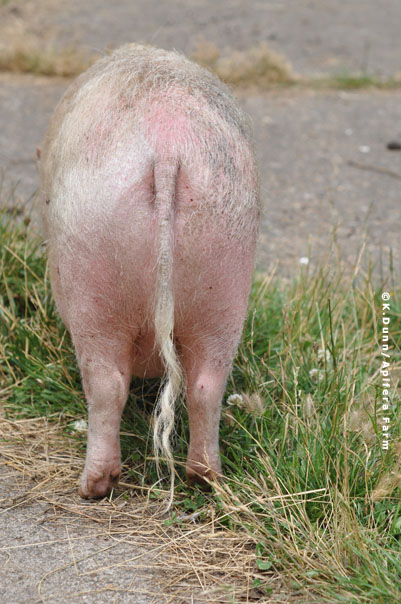 "I'm going to take you fishing," I told the Dirt Farmer.

His expression showed delight, as he hadn't had time to fish since fall. He had worked tirelessly on so many projects all winter and spring, then went right into Pie Day prep followed by field work.

"I have a little Inn all picked out and it will be my treat, " I continued.

"We'll fish some Saturday, and all day Sunday if you want...and then Monday we'll pick up the pig," I went on.

"The pig?" he asked.
"Yes, the pig, and Stevie the crippled goat. They go together," I said.

You know you're married to the right person when he considers a fishing weekend fare exchange for driving 12 hours round trip to bring home a pig and her crippled goat companion.

So I was not taking a goat nap, I was off fishing with my husband, while my secret farm caretaker tried in vain to get all animals lined up in order of their height - every night - something I insist farm sitters do. It weeds out the bad ones.

I had been researching pig ownership for a couple years and knew the subtle nuance of the Apifera barnyard required any incoming pig to be just the right fit or there could be an old goat uprising, or depressed senior goose therapy sessions. While several pigs were brought to my attention, they just didn't feel like the right fit.

And then I found Rosie. While Rosie herself wasn't old, her owner was and the elderly woman could no longer care for her. She tried very hard to find her a home and felt her final option was to euthanize her rather than let her fall into a large shelter. I do not fault her for this, nor should you. But Rosie was taken in by a wonderful "care farm" called Sanctuary One. I immediately felt a kindred connection with them, as the mission of a 'care farm' [a popular concept in Europe, but not as well known in the States- yet] is to bring together people, animals and earth and let them work together for mutual healing. The fact that Rosie's owner was elderly also brought up emotions for me, knowing the loneliness and sadness the elderly go through, losing friends, mates, homes, health, mind, senses...and animals, as their lives wind down.

So I inquired about Rosie. She sounded charming, yet pig like, not spoiled by couches, late night TV or too much food out of a refrigerator. She was a farm pot bellied pig, not a Paris Hilton kind of pig. As I learned more about Rosie, I began to sense this was the right pig for Apifera.

And when I found out she came with a crippled goat, I just knew, she was the one. Stevie the goat was part of a huge neglect case in Oregon where he and 30 or so other goats were taken in by the Humane Society. His feet were about 6+ inches of curl and he could no longer walk. He walked on his knees and would never be able to walk on his feet again even after the toes were trimmed. He was the worst case of the goats taken in, a ligament operation was donated so he would be able to at least get off his knees. His legs would always be bent and he would be crippled, but it would allow him to walk. And it did. When Stevie was placed at Sanctuary One, he immediately bonded with the little pig. Lovers? Friends? It matters not, the Sanctuary saw their bond and wanted them to stay together.

I discussed it with my vet and showed him the movie of Stevie. After a CL test proved negative, it was official. Stevie is very kind, very, very friendly and I see much satisfaction in his eyes. He has been a role model at Sanctuary One, appearing on TV and helping children and the elderly with his calm presence. He is dignified like any physically challenged man, woman or beast strives to be.

When we arrived at the Sanctuary for the Great Fishing Trip Pig and Goat Pick Up, they had the local TV news reporter there [they had asked my permission] and they wanted to know why I was attracted to old or special needs animals. I explained that they were often seen as misfits, or 'not right", or not young enough, not pretty enough, not up to standards. How many times had I felt that? Even as a young child, I remember being drawn to those misfits. The elderly are often treated as misfits in our culture, as are those with Granny's lisp, Guinnias' limp, Frankie's funny ears, or Honey Boy's skeletal lanky form. I realized too that when I care for the needy animals, or old ones, it heals the misfit in me.

I spent my first morning with Rosie rubbing oil on her dry skin [she has shedded out and is in a rather hairless state right now, something pigs go through]. While this might seem like an odd comparison, it reminded me of my father in his final year. He too had painful, dry skin, his 83 year old legs and arms were often chafed just like Rosie's. Each time I rub oil into Rosie's dry skin it is a way to connect with my father - I couldn't help him then, I couldn't be there to do such a simple, caring task as rubbing oil onto his skin. Caring for Rosie not only helps her, it helps me heal that sense of helplessness I carry with me after his death.

Each time I can use my hands to touch an old creature with massages or gentle pats of "hello", it is like doing this for my father - and all the old people that I could not help, or can not help.

That is what I want Apifera to be- healing. Not just for the animals, but for the people I bring here, both young and old. Martyn and I nurture the earth as best we can and in return it feeds Apifera as best she can. The animals feed our souls, and we in turn rub their aging bones and sing to them in death.

I have already paid the adoption fees on these two wonderful creatures. But I'd like to raise $150 for Sanctuary One. If you'd like to donate at one of the Gift Levels below, please do. 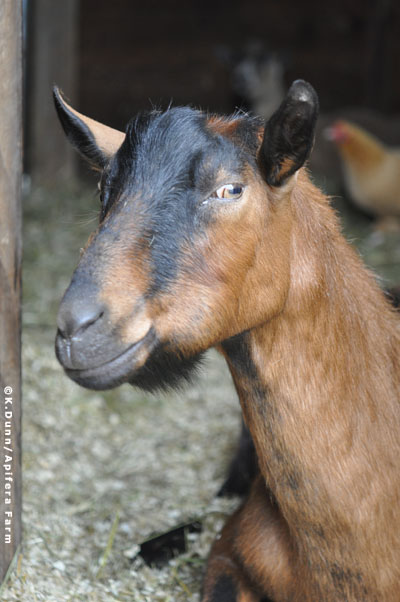 Wow, Katherine! Now you've gone and done it! I was already crying when I READ Stevie's story and I don't know that I needed to see the VIDEO of the news report of him.

Oh, you precious and kind person, I am so happy you are doing these wonderful things!

home sweet home. now THAT was a better than average getaway weekend! they are a lucky couple that rosie and stevie.

Oh Katherine, I cried such tears for Stevie - first of sadness after seeing his video, and then of happiness for his being a member of Apifera. Rosie is special too, and carries the name of my first rescued chicken who had no real beak - just a little hole that she scooped food into. I wish that I had sanctuaries like New Moon and Sanctuary One close to me. I would so love to volunteer there and choose my special animal friends. You and the dirt farmer are truly an inspiration.

What a beautiful post and you and Martyn are very special people. I'm so happy for Stevie and Rosie, that they get to be together forever and meet so many other lovely animals at Apifera.

God Bless YOU all at Apifera Farm!

My daughter who is nine wants to become a farmer/chef/potter woman in the future. I would love to bring her to one of your events! I am so grateful for all your amazing work, on so many levels.Hugs to all your animals.(I love 'misfits' always have been one...)XX

That made me cry. Bless you for seeing the beauty in these needy animals and giving them a wonderful home.

How lovely that she shares a name with your dear departed Rosie.

I hope one day to be as lucky as you and have such a farm.

I'm so glad there are people like you who have the resources and hearts to do so much for our animal friends.

You truly are angels on earth.

I had just finished wiping my eyes over Rosie, and then I had to get the Kleenex out again. I truly believe that certain people are put on earth to tend the forgotten, abandoned, and lost. I know that tending the abandoned that land on my doorstep help to heal that part of me. Thank you for being a home for those that need love.

Aaaah!! Forgive me a moment of shock! I can't believe you were the lucky person to adopt Stevie! I had sent in my adoption application for him only two days after you, but the staff at Sanctuary One told me he was already adoption pending and was headed towards the perfect home. At first I was doubtful that he really was going to a better home then what I wanted to give him, but now that I see that YOU are the one to be taking care of him, I have to agree with the staff. :) Please give him a kiss for me, I was head over heels in love with him.... :)