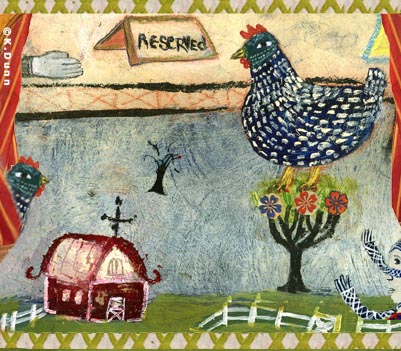 I knew she wasn't well about two days ago. I saw her standing in the coop that morning, somewhat listless. I held her for awhile and asked her if she was going to die.

She responded. But she also went out and ate breakfast and I went about my chores.

When you move to a farm all sorts of people share their opinions with you about raising livestock and animals. Ironically, many of them don't even live on small working farms or own livestock. But one of the wisest things anyone shared with me when we first got chickens was, "Sometimes they just die."

Another told me if you can get a chicken past two years old they tend to live a long time. This appears to be somewhat true. Sweet Jane was part of our hatch in Spring, 2009 and she was part of the Three Janes. The barred Rocks were a constant muse in my art, their speckles brought me great satisfaction, and their personalities are much like the Buff Orpingtons- dog like. We lost one of the Janes last year to cancer [assumed] and now The Three Janes are The One Jane.

Right before I entered the coop today, I found a baby red finch, adjusting to new wings. I held him, he pecked me hard and flew off. It was the farm's way of showing me a ying for what was about to be a yang. When I collected eggs this morning I found The Two Janes in a roost with another hen sitting all squished together. They usually only stay in a roost alone or with one other hen. I reached in to collect eggs and knew Jane was gone. As sad as I was, I knew she died with the other Jane, and her hospice work was more comforting than mine.

I did a painting a couple years ago, with the table setting saying 'Reserved" and a mysterious white glove laying near by. A speckled chicken sat up high on a tree. Art often lets me know what is to come. I also know that when I first saw Jane ill this week, my instincts told me she was going to die, with me or without me. My intuition was right. Many things have happened in the past year that remind me my insides are pretty wise - about people, decisions and business arrangements. All the good in my life is from listening, and trusting, that internal guide. And when I don't listen to it, or shirk it off, disarray enters my world.

So Jane and I knew the truth. 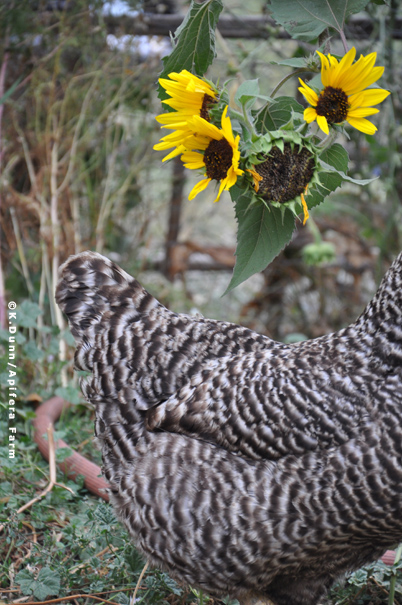 Email ThisBlogThis!Share to TwitterShare to FacebookShare to Pinterest
Labels: Chickens, Life on the farm, Rest in Peace

I'm so sorry, Katherine. She was a beautiful girl. RIP, Jane.

Beautifully written. I'm so sorry for your loss.

not jane! so sorry...she lives on in your work though....and that's a lot for a chicken.

We lost our first chicken this week. She was also a Barred Rock. The experience has left me speechless. Your writing speaks to me, more than you'll ever know. Thank you

Jane's heart may have stopped beating, but her soul lives on in your works, both visual and written. Surely, to be loved, is the greatest gift a chicken can have. Jane was richly gifted. Blessed be, Jane.

Oh, poor Jane. Reminds me so much of my rabbits, actually. My eldest are strongest, one having eaten most of the carcinogenic insulation in our basement (she wanted into the cold cellar, one way or another). Whilst two died in their first two years, and seemed ill fated, one health woe after another from the start. All the health intervention doesn't matter one bit. And they die, so fast. Eldest bunnies are now over 6, the three of them. : )

So sorry, one of my beloved outdoor cats died this week, too. In fact, it was WB who I mentioned in a comment on your blog a few days ago. Always sad to lose someone, no matter the species.

It's true, Shaylen, 'all the help intervention doesn't help". I've learned to see some signs, and know the inevitable is coming. Then again, sometimes there aren't signs. Sigh. Mac- so sorry about WB! I remember you telling me about him...

Sweet Dreams! Being still is sometimes what we need!

Your care for Jane is touching...her life was surely so very much happier than most of her species!

This is very moving thank you for sharing it.