The Three Janes are now two 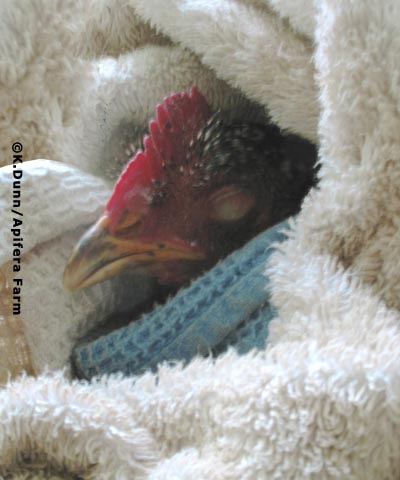 She put up a good fight, but Jane died after a 4 day struggle with...well, it's still a mystery. Jane had been eating most of the four days, and yesterday afternoon she had even ventured out of the coop on her own, which meant jumping and going down her ladder. Last night, rather than secure her again in a separate pen, I laid her in one of the roosts, on top of some eggs. She prepared to lay down like any hen on eggs, so that too gave me some hope. If she was egg bound, maybe sitting on eggs would help stimulate her tired body one more time.

But this morning I knew she was dying. She was very listless, and her beak opened every now and then, a sign she was suffocating or not breathing well. Her head was still upright, but, I knew her hours were numbered. After I gave her a brief time in fresh grass, and said my good byes, I took her back to the proper place for her death, in her coop, surrounded by her clan. I was sure she'd be dead within the hour, having witnessed the stages so many times now. But she hung on...and on...by 2 pm, she was really out of it, and I opted to bring her in and clean her up in a warm bath. She was on her way, making sounds and motions I now know as death knocks. Rather than taking her back to the coop, I opted to wrap her in warm towels, and have her resting with her head up, hoping any suffocating would be lessened. But she was most likely comatose in that last 30 minutes.

I do not think she was egg bound, which is the only thing I and most chicken friends could logically think of. I did inject a needle into her large egg size growth under and to the left of her vent, but couldn't retract any fluid or material, which made me believe it was not an egg.

I buried her in the hen yard, next to Madelaine Albright, Zuchi, Henny and Gracie. Bamboo shades the resting spot, and hens gathered as I put her to rest. I was thinking as I buried her, with hens clucking away, nature truly was singing to us. "She died the same day as Lena Horne," I said out loud. Strange the thoughts that come to you as you bury a fallen friend, even a chicken.

I told Jane many times in the past 24 hours, that she should go if she had to. I think it's important to let all creatures, - two footed, winged or hooved or pawed- that it's okay to move on. I've also taken pains to look at them as the creatures they are, and understand what makes them comfortable, or not, in caring for them. I fretted about that last bath for her, I knew she was dying, but maybe I was wrong, maybe a bath was the right thing. Did I intervene there? Perhaps a little. Yes, she was a chicken, but you learn a lot about death, and the battle of life, when you care for any living thing, especially when caring turns to hospice. The body takes time to wind down. It always amazes me, even a chicken took what time was required to die.

But the sometimes odd magic of Apifera was at work immediately upon her death. Martyn has a golden rule for me - no new animals until one dies. And as I carried Jane's lifeless body to the hen yard to bury her, I saw a brownish, very scruffy cat. I called out, "Hazel, Hazel", thinking it was one of our barn cats we rescued years ago. The cat stopped not 30 feet from me, looked at me, and I realized it was not Hazel, but a new stray. It looked like a real survivor, a cat that had fought the battle to stay alive, and so far, was winning.

Thank you to the many chicken lovers who wrote and emailed giving advice, and support.
Posted by Katherine Dunn/Apifera Farm at 3:12 PM

What a sad story, you have such a writing gift. I am sure the animals at Apifera benefit by your other gifts. I am sorry for your loss.

Oh Katherine, I am so sad for you, and for Jane. She was a chicken with friends. If only they could all be so lucky.

well said, well done...sorry to hear of your loss, but what a lucky chicken to be well cared for.

I'm sorry to hear about Jane. Sometimes we never know why they leave us but we have to know that their life was valued and that we loved them to the end.
It's the way of all things...

Oh, I'm sorry, I had hoped otherwise. I think you cared for her beautifully in her final days.

I'm glad that Jane had such loving care during her life and her last days.

Oh honey, I'm so sorry you lost her. But she was a rare chicken, with a human friend who honored and cared for her so well. RIP, sweet Jane.

So sorry to hear about Janey, Katherine...your recent chicken stories and conversations make me feel like I'm right in your barnyard.

You can add our little dwarf hamster Felix to your obits today too. He had been ailing for sometime but went downhill the last few days. He died today while I was helping my daughter's classroom discuss the classic children's book "Tuck Everlasting" of all things...

At one point while hand-feeding Felix, his eyes got big and wide and he just looked at me...I mean really looked at me. Our eyes locked and he seemed to summon all his life force to tell me, "thank you, you've been nice, but you can stop now..." Oh what a humbling moment that was!

all my best to you...
Paula

You are truely a big, really big hearted person. Thank you for sharing your life with us. I'm sad you lost your sweet Jane.

It is truly amazing how life and death come at us. I also "received" a new stray cat just as I was burying a much loved cat of my own. Jane was lucky to have you and it is hard not to second guess your every move after a death. I wish everyone could see the beauty in all living creatures and know that they, too, feel. I am so sorry for your loss and know that hollow feeling. Let that scruffy cat fill you back up.

Everyone, thank you so much for the kind thoughts, and taking time to write. And for sharing your own stories of loss, be it chicken, rodent or other creature. I think when you read today's post above it will make you smile. Jane did have a good place to be a chicken, didn't she? And Paula, so sorry about Felix!!! And I know that look you describe, I know it.

Having been a nurse for many years we all know about the "death bath," it relaxs people and often shortly after the bath they move on. I am sure your tender administrations quieted her and made her feel better.
I am amazed at the depth of your love for the creatures in your care, it's beautiful. It takes courage to let death happen naturally, few can wait and watch. Good for you brave one.

Karen, thanks for that. You know I really enjoy [for lack of a better word] hospicing these animals. Maybe I was a wounded bird once. I know it's just in me.

your telling of jane's story brought tears to my eyes
teri