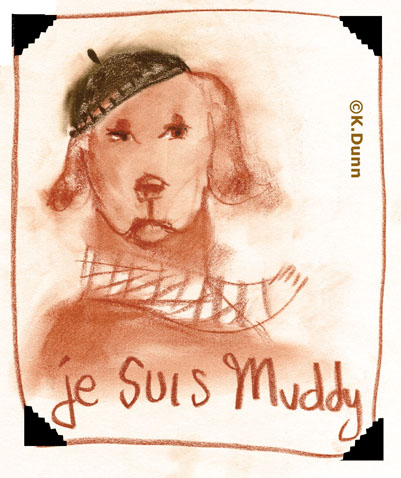 Is it ever okay to lie to your animals? I think it is, if it means keeping a youngster's nerves calm. Say what you will, here at Apifera when a young man needs his cowabungas removed, he doesn't go to the vet, he goes to Paris.

And so it went on like this for most of the day, a 6 month old lab asking me politely for French Fries. Huck stood by with a very empathetic look on his face, his large brown eyes showing he knew exactly how his younger brother felt. For he too had been to Paris back four years ago. He too hopped into the car thinking he was off to Paris for one night, to see poodles, and great art, and then be back at the farm for dinner the next night. He too thought it odd that on the way to Paris he had to stop at the vet, "For your special Passport," we told him. The next thing he knew, he had dozed off, and when he awoke, he somehow felt changed.

"You look good, Muddy, did it all go well, were the accommodations pleasant?" I asked.

"Pommes Frites, s'l vous plait, " Muddy repeated in his best French accent. "The people were nice. It all looked quite American though."

"Mud, mon cherie, you weren't in Paris. They just said that so you wouldn't freak out when you found out they were going to take the old cowabungas off." Huck said, still brotherly.

"What? My cowabungas?!" Muddy shrieked, as he looked down between his legs. "They were just getting somewhere, and now they,re...they're..."

"Wow...." Muddy pondered. "Does this mean there won't be any pommes frittes for dinner?"

That night we had grilled potatoes.
Posted by Katherine Dunn/Apifera Farm at 10:40 AM

Poor Muddy!! This was one funny post. After this ordeal he deserves his Pommes Frites.