I kicked a gate and cried with the pig 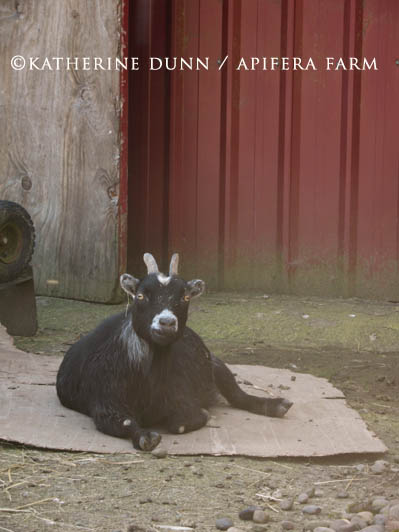 The Head Troll, aka Frankie I'm Not a Boy, turns nine or ten this year. She shows here that one doesn't need a velvet cushion to rest on. But we all need to stop and listens to our light bulb moments.

Before you read this post, know this: I am not going anywhere. And my work has just begun, it's just shifting to my misfit aspirations.

I have been journeying along and have come to a small stream, much like the one that runs through the donkey pasture. I will get to the other side without problem, but I do need to acknowledge that I'm at a crossing over point and I need to make the steps.

This week I put together the beginnings of a will. I am not planning on dying, but I suppose I must someday and I want to know the farm and any animals will be taken care of. To be honest, it is daunting thing to consider - being killed suddenly with the animals all here waiting for their night feedings, Itty Bitty scratching at the door, Paco worried when my car doesn't drive up the road, Rosie asleep in her hay bed unknowing and my flock waiting, and waiting, and waiting at the gate. Even if Martyn was here, he would have to find homes for most of the creatures that have been under my watch.

I thought it would be a simple office task - write down an emergency list of vets, friends and sanctuaries and leave it at that. But if my animals had to be re homed, how would they know that Itty Bitty likes BW, and Peach should go to a house with dogs but no cats, Rosie and Stevie need to be together, and the minis must stay with Matilda. Will they know mama Kitty is bonded with the porch cats, and that Bradshaw wonders off and might come home to every vanished. They don't know Boone hates squishy mud and will buck in it. Would they know what to do with Old Man Guinnias? If I said on paper, "Please keep Daisy with her daughters and John John should stay with Lilly, his mother" - how would they know who was who. Will they realize Priscilla the goose is 19 and needs to be kept with her ducks, all related? And will they care? Even Martyn doesn't really know my sheep or some of these things. Mug shots of all animals? For now the list sits in a folder, "In case of my death", without mug shots and I hope it never is read. But it got me to thinking.

One could say this is me trying to control an outcome, I guess. But caring for an animal, especially old and neglected ones, is a responsibility I will die with.

For eight years, I've been going full steam ahead - raising sheep and all that entails, blogging, evolving, transitioning from illustration to gallery work to a book and then more books and then out of illustration but back to books with illustration, digging graves, catching rams, flipping rams, mending fences, soothing old goats and donkeys, learning, making mistakes but always admitting it and learning more, rushing, thinking, creating.

I think I hit a tiny wall this week. Okay, I hit a gate, with my boot, make that three gates. After I got the funding for my Kickstarter project, I was so thrilled, and still am, but there was so much to do elsewhere, and I just wanted to stop and think. But there was no time to think, because I tried to think I looked out the window and the ram got out, again. And I yelled at him. And I called him "Damn Ram". Many a shepherd has called their ram such so I don't hold this against myself. Besides, he didn't care, he never listens to me. Little Walter does, but not Mr. T.

I sat down in a lump in the barn and had a good cry. Rosie came over. Little grumpy Rosie came over to me and this really touched me. My tears and vulnerability moved that grumpy little pig to come over... maybe her first intention was to snort out a cookie, but she stopped and stood by my side and I cried with her. That was sort of this huge turning point for me. Crying with a pig at your side better be a turning point of some kind. I realized right then I wanted - and needed - to make some tweaks in my daily time and how it's spent. I want to spend less time breeding sheep and more time with my old animals and misfits. I'm tired of flipping rams. If someone is going to jump a fence, I'd rather it be Stella - who is also turning 8 this year. It won't happen overnight, but I want my flock to evolve into my girls, and one little runt named John John.

I just want to be with my misfits, and if I am introduced to another misfit - old, gnarly, three legged or one eyed and they accept my silent invitation, I'll care for them as best as I can.

So, that is why I am at one side of a small stream, and I'll get to the other side. I just need to adjust my footing. There are lots of old creatures on the other side, waiting for me.
Posted by Katherine Dunn/Apifera Farm at 2:27 PM

Email ThisBlogThis!Share to TwitterShare to FacebookShare to Pinterest
Labels: Life on the farm, Wisdom

this is a beautiful post. thinking about our lifes work and it's end is courageous introspection. I believe the loving creator who gives life to these creatures would care for them in His providential way. The animals will communicate to new humans. I hope your work of kindness does go on.
i don't always somment but I like to read. I love artists and your life is unique and lovely to look in on.

I just am shifting my priorities to be more with my Misfits. I can't do everything, was part of my message here. Less breeding sheep and more shepherd of growing old sheep and misfit coordinator, and writer/artist.

Misfit Coordinator: a fine line to add to anyone's resume!

I share a space next to the stream with you. I am not planning on leaving any of my fur-bound friends, and a daunting task it is to consider what would happen if you were not to come home one day. I prefer not to consider this--but, for my own piece of mind and their well being, it is a necessary task. Good luck with your stream crossing. You aren't alone!

First of all, congratulations on getting your kickstarter funded! What an accomplishment, for you and for the important cause at hand. I wish I could have given more, but it is reassuring that everyone gave what they could, and got it done.
It seems only natural, after such an accomplishment, that it might shift priorities and shine some light into new or overlooked corners. Life is a process of experimentation and evolution; you put some out, you see what comes back, you let that shape you.
It sounds like a very positive shift here, drawing you towards your passion and calling in life, and doing the world a great favor, the old beasts and all of us who feel their grace and wisdom on this earth.
You are always an inspiration!

Hi Katherine! Of course you cried with the pig, pigs are most like humans, they say; their hearts are so like ours they've even used their valves in human transplants.

We are all the same, and I know what you mean about time..there never seems to be enough time. You will find your way, you always have :)

Mary Ann - good for you, it is a responsibility as a farmer or animal caretaker, in my opinion, to think of it...Lisa/SalmonP I love how you put this- and it is what I stumbled in this post to say. I think I had two ideas in this post and my head was cluttered and confused the outcome. I was trying to say what you said, I want my priorities to shift, and they will, and the Misfits project is part of that evolution for sure. Zan, I will work it out, you are right!

while i certainly am happy you are not going anywhere, i can understand your desire to be as prepared as possible should something happen...it's what good parents often do, and you are a parent to your crew....prepare for the worst, hope for the best...and i think there is no better release than crying with a pig. i have often found that even the best of news (kickstarter) can be stressful in some ways and is an excellent time to re-think priorities. you are a wise woman and will cross your creek when the time is right and climb up the bank ready to roll.