When old and blind hospice the young 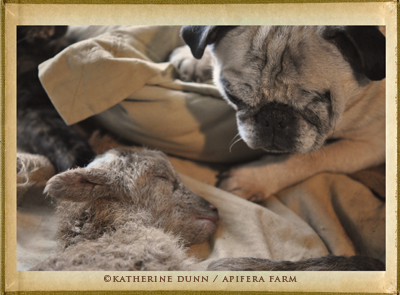 There are twenty one days left to fund my Kickstarter project, "Misfits of Love". I'm very proud I have almost reached 50% and am over $4,000 in pledges to help my stories of the old and adopted animals of Apifera enjoy a wider audience. There is still a long way to go, so please pledge now, or share with as many as you can. And thank you to all who have helped! One of the stories in "Misfits" is "Hospice of a Lamb", shared in this post.

Introduction to story:
Death cannot be avoided if you’re going to live and The Cycle of Life is always the main character on the farm. Early on in my shepherding, I learned a simple truth from a fellow sheep farmer, “You can’t save them all.” But you try. When Daisy had triplets one year, her weakest was a little girl. I have learned not to name lambs right away – for many reasons- but this lamb had the same striking white cap on her coco colored head, just like her mother. In my heart, I named her “Little Daisy”, and while I never said it out loud, she knew. She felt my intent of compassion, that’s what a name is. There was a feeling in my bones something wasn’t right with her and she failed very fast over hours. I made my best effort to save her, but it was clear she was dying. Rescue turned to hospice and I placed her near the warm fire in my studio, knowing she had hours to live, not days. The group that gathered around her to hospice were the old one-eyed pug – nearing the end of his life too- and Itty Bitty Etta, the one-pound kitten I found on a highway, and the soul of the house, the chocolate lab named Huck who carries his heart in his eyes. They were not fighting the death; they were simply present with it. It was so quiet. I stopped to get my camera, but then wondered if that was a selfish act- to photograph this deathbed. But I felt compelled to document it, and to this day, the photographs from this day move me to my core. I can only hope such creatures are present when I lay dying.

I felt myself leaving the warm water, my legs were suddenly weighted down to hardness below me and I was cold.

I tried to breathe this realm’s air, but the cold filled me.

I weighed four pounds. I was dying.

My two brothers stood near by but felt far away. My mother said a silent goodbye and I was half floating in the clouds above. Floating in, floating out, and down.

She had secretly named me Little Daisy, the woman from the house. It felt significant to be named, to have a word that represented my brief mass of minutes, even if they were breathless.

The woman found me lying listless in the hay and I was rushed away. Her actions were confusing to me but I sensed no real threat. I could hear her voice, but I just wanted her warmth, her warmth, and her warmth.

I was laid out on softness near a strong heat and I saw close up bits of creatures huddled with me. I was warm again, on my outsides. They licked me as my mother had for that brief moment when I felt the earth and left the water. 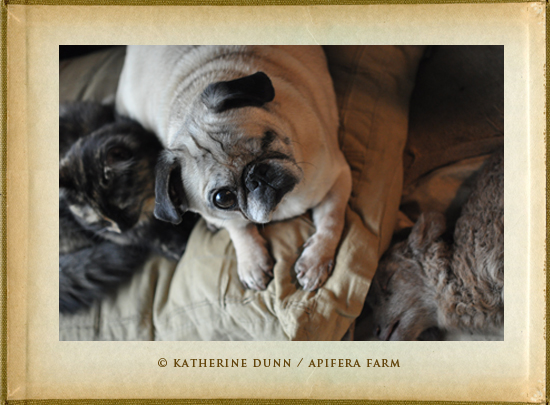 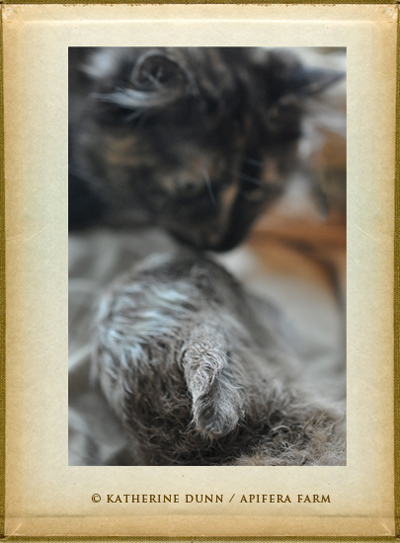 Posted by Katherine Dunn/Apifera Farm at 11:38 AM

So beautiful, and so sad. And the photos take us to that place that is beyond words, where we merely feel the emotion of the experience right down to our bones, and that is enough. Not every being who is born is destined for life. A truth that is so hard to bear.

Hello Katherine, this story is so poignant, beautiful, an inspired. It is life. It is death. It is everything in between, the way it should be and could be. I don't know how else to say it. It is like looking at something that just perfectly "is". Like a great painting or work of art that gives sudden voice to a truth we all share. Thank you for sharing your writing with the world Katherine! Delisa