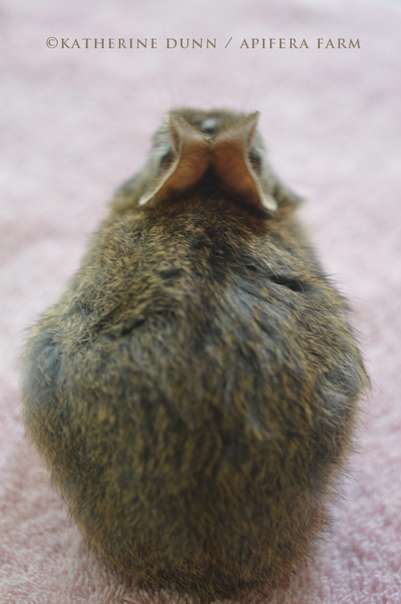 I was minding my own business, getting ready to go to barn when a mass of Itty Bitty Etta fur color went flying by me out of the corner of my left eye.

I saw Itty leaping forward to escape with her prey. I screamed at her and remarkably she dropped the small mass of fur, almost identical in color to her.

I had assumed it was a bird from the sound and resigned myself to the probable fate. But it was not a bird, it was a tiny bunny.

Now I am perfectly aware that taking in injured wildlife is not always wise. I am also aware that it is actually illegal to keep a wild cotton tail as a pet. The bunny was a not a newborn and seemed unharmed physically. It was very calm - but of course a calm looking bunny is also a scared stiff bunny. This is not Disney and I knew the bunny was not looking at me as it's gentle savior - It was looking at me as a giant, scooping up her life in her hands.

I brought the bunny in for observation. The two tooth marks were barely noticeable, no skin had been punctured. The legs seemed to work. I had learned from a vet years earlier, on one of my many bunny rescue attempts, that the injuries can often be neurological and there is usually one outcome. Stress is very hard on these little wild creatures, especially around the sounds of a two footer's house.

After a few hours of rest, I took Little Lapine to a shady place, but it refused to hop off. I tried another place, and again, it sat right there, not moving from my gentle prods. I walked away, it stayed. So I brought it back in, thinking it might be brain damaged. I knew it was in Nature's plan now, not mine, but it seemed heartless to leave it for cat bait if it was brain damaged. I would hospice it if that was the case.

I fretted and did research and emailed a wildlife connection. All led me to the same response - release it farther from house. I made the mistake of sharing it all on Facebook, which seemed to generate two kinds of responses - one being, "Oh my God you have to keep it" [never my intention], and two, slight scoldings from complete strangers about not keeping wildlife as pets [again, never my intention]. This not only reminded me about the difficulty of having any kind of intelligent discourse on Facebook, but also reminded me of how intensely people feel about bunnies.

How can you not get dreamy eyes while holding a small bunny?

I determined by its weight and length the said bunny was at least 5 weeks old - but probably much older. He was 350 grams, well over the 150 grams of a five week old and was very capable of living on his own. I also viscerally knew the bunny needed one thing to hop away - to be free of me.

So I set out to take him to Muddy Hill this time, much farther from my original place of release. I took him to the Savannah Oak Grove and set him in the shade.

"I think this will be good, don't you?" I also told him I was sorry, that if I had done the wrong thing, I apologized for just trying to help for while I did save him from Itty, perhaps I should have returned him sooner.

Little Lapine just sat there, but then took a big hop.

Then I took a step toward him and said, "Go on, now," and off he went, rushing into the thicket.

When I took the sheep down to their grazing area the next morning, I looked up to the spot where I'd last seen Little Lapine. I imagined him there, safe, in the bramble, hearing my voice as I called out, "Hello Little Lapine!".

It matters not if he was there or not. That is not up to me. What matters is I choose to think of him this way. 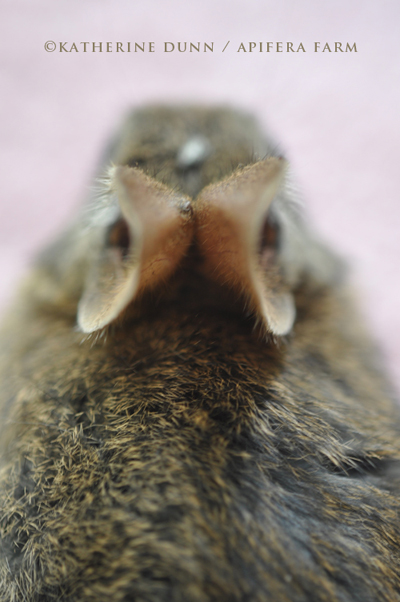 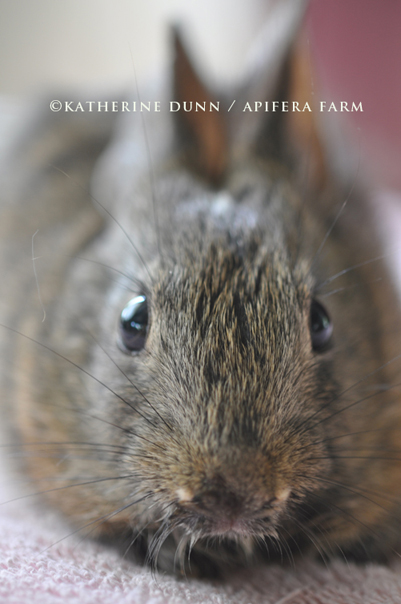 It is so hard for an empath such as yourself to be "reasonable". But, you did it and I applaud you and your heart achy work.

I have had sad experiences recently with injured wildlife. First, found a very sick baby raccoon in the yard -- brought her to wildlife rescue, but she had distemper and had to be put down. Then found a blue jay with a broken wing. He died in my care before I could get him professional help.

I'm so glad your little lapine hopped away on his own speed. You did the right thing, and now he will grow up to sire many more little lapines.