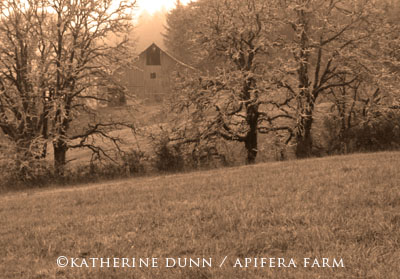 "Dream deep," I heard a voice say warmly, like an old Aunt sitting and knitting on the front porch.

It was Old Barn, back on the day I first looked at the property, the place that would become Apifera Farm as we know it.

It was then that my relationship with her began, for she recognized I was a dreamer. It was the first of many brief conversations we would have, as I learned that Old Barn was a creature of few words, but when she did speak it became a pivotal moment for me.

I had no idea at the time that she and I would work side by side with so many animals, old and young, helping some pass on and encouraging others to live. It was all part of the dream and Old Barn intuitively knew about it before I did. Just as I was enticed to move West by invisible wisdoms allowing me to find my human mate, there were powers that brought me to this old barn and her land and together we became a dreamed reality.

One of the last century wood barns in the surrounding area to still stand, she had become a Misfit herself. Her kind had been replaced by aluminum and metal structures that wouldn't rot and could hold off fires. One person suggested we tear her down and sell her fir boards using her concrete pad as a starting point for a new barn. But I approached her condition like I would any neglected creature that would some day arrive here - giving her sustenance to make her limbs stronger. To this day, she stands in a state of elderly attire, rusted roof and faded red wood exterior softening in fog and lighting up at sunset.

Her life of service defines her and she has what many old creatures are missing - purpose and companionship.


{Old Barn is part of a book I am writing about the Misfits of Apifera}
Posted by Katherine Dunn/Apifera Farm at 4:11 PM