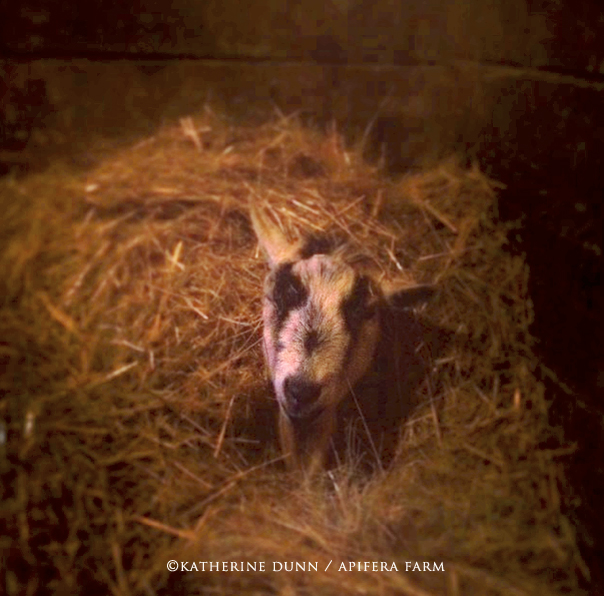 {If you like the sounds of all this, consider a subscription or reward level donation to help me and the Misfits chugging along}

It's been an exciting few days - culminating in yet two more Misfits arriving from New Moon Farm Goat Rescue.

It kind of all happened in a nice series of events.

As you know, Martyn and I brought home Ezra last week. He was part of a herd that New Moon took in after the owners relinquished them, dementia was involved and the goats had not been cared for well by the caretaker. Two were already dead, and one more died after arriving at New Moon. When I picked Ezra up, I had my eye on another little crippled goat, but he was only 3 and I felt Ezra the elder needed me more.

I made a quip that if someone put that little crippled goat at my gate I'd surely take him in. Well, New Moon heard that and ran with it [after asking me] and a woman and her little daughter, who had just adopted one of the same herd, volunteered to bring the goat down to Apifera.

But it gets better.

The next day after we made arrangements to get the new goat to us, one of the same neglected herd needed to be euthanized. She just couldn't make it and needed help to pass humanely. But that left her very bonded herd mate alone. New Moon felt the two had been mother-daughter, or maybe sisters, because they were heavily bonded. The remaining doe was very dazed, just sort of lost without her bonded herd mate. It really pulled at my heartstrings. So many upheavals for her and the herd. Knowing that the elderly couple had obviously once cared and doted on this gang [they are all very personable so someone was tendering them fr sure], also pulled at me. What if that was me someday, or you? So I told New Moon I'd like to bring her down, and we all thought that being back with Ezra, one of the original herd she'd been with for so long, might help her little soul.

So, they arrived yesterday. She'd been named Aster in a naming auction, but I was informed by The Head Troll that that was not to be her name here. Her name had to be "Mrs. Aster". She may not come with millions, but she is wealthy in the love around her.

The other sweet chap, the younger crippled fellow, is quite healthy, full bellied and besides his deformity, gets around great. His back leg and hip do not work, and never will, causing him to use only three legs. The vet thinks he was born that way, or it was an injury at birth or early on that wasn't corrected [if it even could have been]. He comes with the current name of Palaver, but I have not hear in the wind if this name will stick.

I'm happy I can help them. It feels good, and they are both sweet-they just need time to settle. 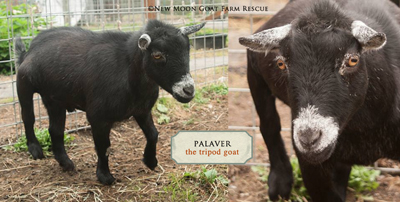 What a lovely story on which to end the weekend. I especially appreciate New Moon hearing your quip and calling you on it! And poor Mrs. Aster ... ah, she is in such good, loving hands. May we all be so lucky to be honored and cared for the way you care for these creatures. I gotta believe you are building up a healthy bank account of good karma (yes, to balance out the other bank account, I'm sure!)

Oh Mrs. Aster is just so cute. I am glad both of these goats will be re-united with Ezra and have a safe place to be. xox