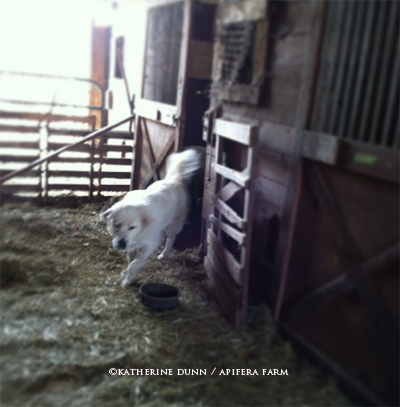 We were working in the barnyard today, securing a certain part of the fence that the White Dogs tend to jump up on. It is with good reason. This part of the fence looks up into the woods, and that is where wildlife pass by. Every night when I leave the barnyard after feedings, Marcella runs to that area and barks for about a half hour. The first thing Benedetto does in the morning is run to that area and check it out.

Of course Benedetto and Marcella were right there with us, watching every thing we did to the fence. I was kneeling down petting one of them when I realized Wilbur was standing next to me. Wilbur is an agreeable goat and not one to seek out mushy talk, but he does like to stand for scratching. So I obliged him.

The photo can't mimic what we saw. The claw marks were long and left welts. I'd guess they were about a week old from the condition. They were on both sides of his neck. They were huge. No way were they left by a barn cat, no way. Besides, the two remaining cats that still live in the barn never come in the barnyard, nor do the remaining porch cats-and if they did, this is not something that would have happened as they are tame and elderly. And Benedetto does not tolerate cats. It seems to be his one passion-chasing them.

We started thinking about it, and realized that from the looks of the wounds, this might have coincided with the night Benedetto broke out last week-something I didn't share here, yet. That particular night, we had gone to bed about eleven, and heard Marcella raising a real fuss. Her barks were different than her normal nightly 'Hey, I'm Marcella barking, stay out of my barnyard" barks. We decided we better check it out. And we realized Benedetto was gone. We walked to the nearest property hoping he was there, but no such luck, and decided it made no sense to wander around in the countryside armed only with a flashlight. The next morning a neighbor down the way called and had Benne. He had gone to their house once before, so they fortunately knew him and contained him until morning.

That next morning I saw where he'd gotten out. It was the place by the fence we were fixing today, a place that Benne likes to sleep by during the day. And it's the place the dogs go to bark at night into the woods. It is also the same spot where years ago I encountered a bobcat in the barnyard, calmly walking by at ten in the morning.

As we looked at poor Wilbur's wounds, it was like he was saying,

"Thanks for finally noticing."

I felt badly about that. He had not acted unusual at all and since he still has his winter coat, I didn't see any signs of blood, cuts or discomfort. And he was eating and acting like the little acrobat he always is. But then I remembered that when Benne came back from that nightly outing of a week ago, he had two big scratches on both ears, long wounds that I had blamed in my mind on Earnest. When the dogs get up and moving, they look for any feed that has been left behind, and so does Earnest. It can lead to scuffles, and pigs have very intense incisors that can leave rips in a dog. Marcella has learned this lesson, Benne was learning it, I figured.

But now we really think that that night a Bobcat was passing through, and Wilbur was in the path, or went to investigate, who knows. I leave the youngsters out-Moose, Goose and Wilbur and usually confine the crippled Victor and Sophie, the ducks and Stella in stalls for their safety. If it had been Moose, or Goose, who knows if they would have faired as well as Wilbur.

We thought of a raccoon, but the position of the claw marks, and the space between each claw didn't make sense for that. Nor does a skunk.

This might also be what happened to our beautiful Vivienne the hen, who disappeared not long ago and we never found any remains.

This morning we also flushed out a grown coyote as we were up investigating our upper fields. It is always magical to see a wild creature living in nature, but also reminds us each time that we are just the stewards here, living on their land.

I continue to understand the important job The White Dogs play. Who knows what we don't get to see after hours. I will start putting the little ones in stalls at night, I guess. Even with the White Dogs, it might be wise. 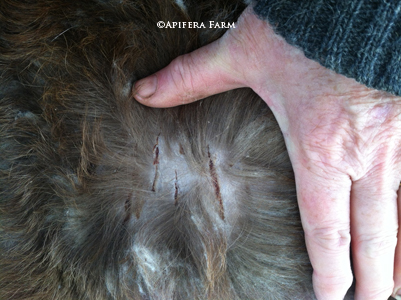 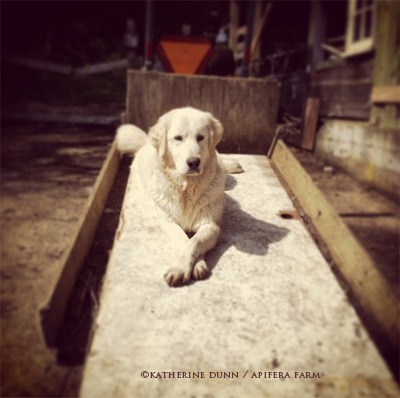 Email ThisBlogThis!Share to TwitterShare to FacebookShare to Pinterest
Labels: Life on the farm, Wilbur the acrobat goat

Oh poop Wilbur, that must have been so scary. Haven't seen a bobcat since I was a child visiting great grands in Canada. More likely to be a fisher cat up our way. Too bad that Benne got out, but good that he chased the cat away. Maybe there will be a happy mix somewhere in all of this. xox

I am sure it was so scary. He does seem a bit more calm these days-not as goofy boysih, like he grew up fast. Today I noticed that when Benedetto ran in a romp, Wilbur took notice and skirted towards me, then was calm again. I figured maybe he will now assume when Benne runs towards something, it might be good to go the opposite way!

Good news that Benne is taking cues. We have a three legged red healer who is our smallest dog and he guards all of us....strolls the fence line to make sure we are safe at all times and is a good snuggler too. xox