Earth Day trash service brought to you by Boone 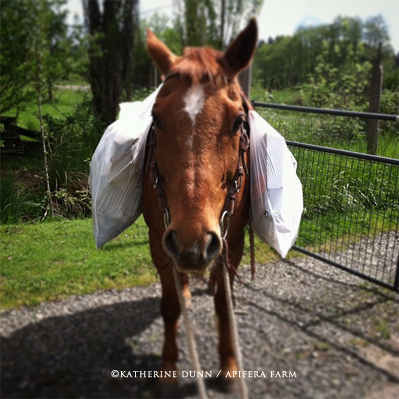 I got a late night email yesterday,

It was a friend about 2 miles up the road who had partnered with me before to walk and collect county road trash. How could I turn the offer down, and it was a perfect opportunity to get Boone out on garbage duty, something he does well.

We met, with another friend; I rode Boone and it actually came in handy-we could act as scouts and see trash they might miss on the ground. As their garbage bags grew full, we tied them on Boone. We walked on one of the busier country roads at the end of our 2+ hour outing-we know the road well and it can be dangerous with its curves, and the occasional I'm-never-going-to-die-driver going like a bullet around corners. We were careful and had a system of safety. Most people were courteous, including one of the county public works trucks who slowed way down and smiled big at us-I'm sure seeing anyone picking up trash makes his shift.

It was another beautiful day, a time to remember how far I've come with Boone, or how far we came together. I never would have ridden him on this rode when I first got him, let alone put garbage bags on him, although he would have probably tolerate the latter as he has always been stoic. He would have been okay, but I wasn't ready. It's not a road I choose to ride on much, but now I can and feel confidant about it. When my friends were picking up trash, he stood politely as garbage bags were tied onto his saddle. He didn't flinch at zooming cars or banging bottles and cans on his side or back.

Boone is a stoic fellow. But I ride him consistently, and not just for 15 minutes. I read some one's blog recently who had a miserable ride on her horse, a horse she rarely rides and then gets upset with when she gets on him and he–in her words–acts like a jerk, actually I think she used another word I won't use here. All sorts of people gave their two cents on her situation. I didn't feel sorry for her, nor did I offer input since I don't know her from Adam and she didn't ask for it. But if she asked me how I got here with Boone, I'd tell her,

I rode him, a lot. And I took some lessons for a year-to improve me, to be a better leader.

Most rewarding thing I ever did and so glad I had a mentor who guided me that way. My farrier too once said to me, after Boone and I got through our initial year or so of misbehaving-

"Number one thing to do with your horse-ride him. You can do all the ground work in the world, go to fancy clinics, read books, but you have to get on and ride him, and not for 15 minutes but hours. Consistently."

Agreed. And it all makes riding around with bags on your back full of garbage much more doable-and fun! No drama! 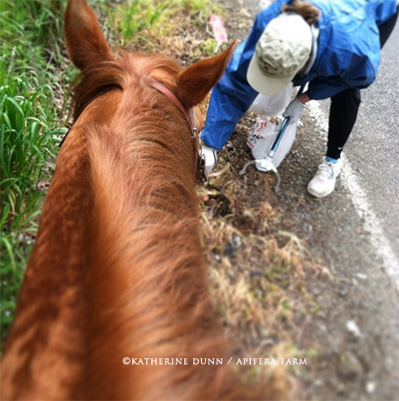 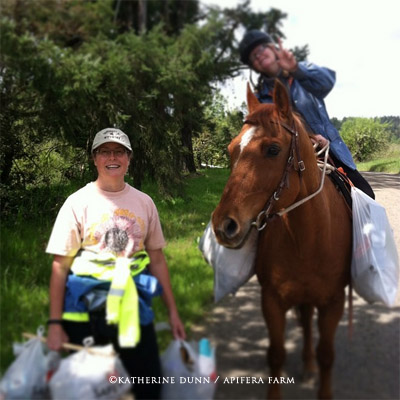