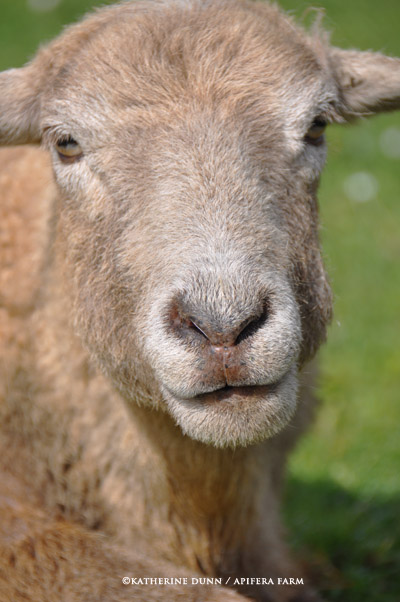 Daisy turned twelve. She is our oldest sheep and along with her mother Rosemary was a founding mother of the flock. She and Rosie were the best teachers a novice shepherdess could have had. We loss Rosie in the horrible Spring of Death, she was too young and she was such a marvelous sheep in every way-coat, personality, and mothering ability. I think back to that first lambing, the excitement before any lambs had come, the constant fretting, are they going to lamb today? If we only could have known what was going on inside her head when I was going through the first lambing season. Probably something like,

"Really? You just checked my udder five minutes ago, don't fret, I am not having this baby today."

Daisy has provided so much to the flock, and to me. After Rosie died, I expected her to become the lead sheep. While she was and is respected, she seemed to take another approach.

"What a relief, I can just let the younger ones take charge."

Sheep hierarchy is very interesting to watch, and it isn't always pretty. Head banging and rough housing are just sheep language for reshuffling the pecking order. I've noticed that Daisy has never seemed to participate, or be the recipient of it.

In the past year, I have watched her decline. She is now toothless, a true gummer which makes her a bit thin right now. Everyone looks scruffy this time of year, with shedding and coming off winter grass. Soon the grass will be much more nutritious and bellies will expand overnight. Daisy has begun to separate herself out a bit from the flock at night. I took these photos this morning while she was still napping. Her front shoulder is very gimpy, and she is always the last to enter the field. Last night I noticed she could not keep up when the flock came running into their night time pasture when I called them. I will have to decide if pulling her out of the flock so she can be in the fields by the barn is what is now best for her–I would also take her daughter, Lilly, who is also part toothless and getting up there in years. But it might be best to let them stay with the flock, as long as they are in the lower fields. It's getting to the point where it worries me to have her in the upper pastures_if she went down, getting her quickly back to the barns would be almost impossible. She is the first one I look for in the morning and I always count heads when the flock comes in at night. I really miss breeding her since she always gave wonderful colored lambs, usually always with a white cap on their heads. I retired her around seven, after she lost two of her triplets one year. I will bury her with those twins, up on Sheep Hill near her mother.

Many of the original animals of Apifera-the ones that came before there were a gang of Misfits-are aging. The Head Troll, Stella and Iris, Papa Roo, and Daisy and the first lambs. The results are inevitable. Some losses are more pronounced, causing a visceral reaction of the skin, body, mind and soul. Such will be the case when Daisy goes. But until then, she has grass, sun, and a flock of relatives. It is a good life for her here. I take notice of her beautiful cinnamon hair every day. 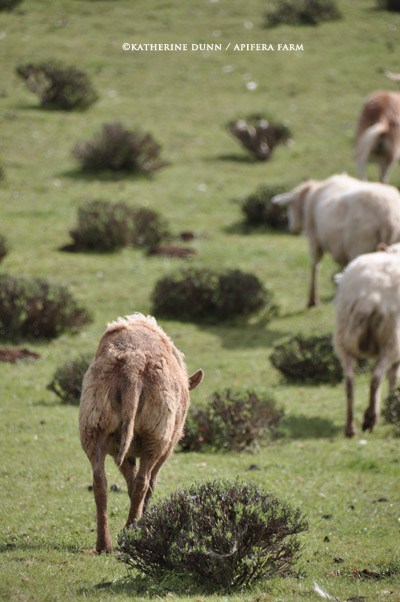 I am so inspired by the care you give your animal family. It's so heartwarming to know someone out there who respects animals so much. It was always hard to watch our goats age and try to keep up with the younger ones and having to keep an eye out for them was part of it. Sounds like this old sheep will have a peaceful place to rest.

She's a pretty old gal and I am sure the sun and grass are enough. xox