I'm happy, they are happy, we are happy

It is always a momentous day when 550 bales of hay are delivered. Any animal that lives in the hay barn area knows its hay day, and they all come up to watch, and of course, test the hay. This year the hay was really exceptional I must say. So exceptional that Boone grabbed a bale or two while we were unloading and stuffed himself silly.

Last year I thought 400+ bales would get us through, but this year I played it safer and got 550 bales. If we have a severe winter, that will make me feel better. Now that the new barn is up-no walls yet, I was able to put some bales in there. We have the main barn stuffed with hay, and all is well. Anyone will tell you that having a barn full of hay for your animals, well before winter sets in, is a good feeling.

I prefer to get all my hay at once. I've done it a variety of ways over the years, but here in Maine, it's crucial for a place like ours to get the hay in. There just are not a lot of growers here, and if you run out in winter, good luck, although our hay guy is pretty well stocked. It's that running out in April that can get you, and I ran out mid May so my timing was pretty good.

Birdie put on a show for the hay guys. Every bale that came in she thoroughly examined it with eyes and nose. All the animals were stuffed in one of the side stalls, watching the event fold. And hay deliveries of this much hay are an event. Young guys most under twenty show up with two leaders and start leaping on bales and tossing them up over their heads. I can't do that anymore...or won't. I bucked enough hay in my years out West, and with my shoulder issues, nope, won't do it.

It is much more pleasant to sit on a bale and watch them all toss them up and down, and sweat. I stayed cool and dry!

We are raising money for the hay to replenish the Apifera coffers. The hay should get us through until May of next year, and hay is probably the most crucial feed for the animals. Our hay guy is really great, and his family are just a delight to work with- all the kids are super polite, and good buckers and stackers. Nothing worse than loose stacked hay.

So Boone is so full right now he is napping and the broken bales will leave everyone feeling over stuffed for awhile, but that is okay.

And the smell of fresh hay filling the barn? Nothing better.

Knowing the hay is in, its just a good way to end a long, hard week.

{Please consider a donation to the hay fund. Thank you!} 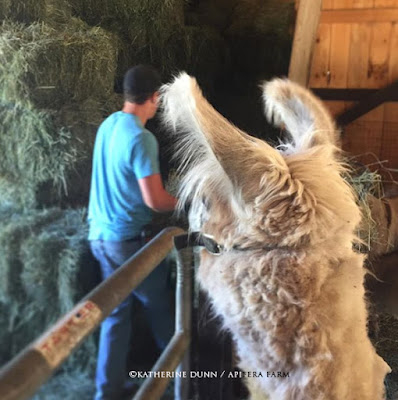