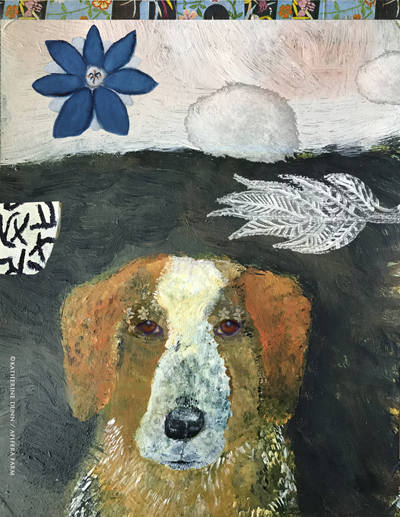 "Maggie knew he was like a cloud now but sometimes he would be a giant blue magnolia in the sky."

Three weeks ago, I wrote about a friend who died by suicide. It was a great shock to everyone, and to me, and still is. I still have not fully grasped it and probably never will.

People have been grieving and sharing about their loss in many ways-sharing memories, sadness, shock...and also in more uplifting ways...the grief evolves down the winding road to what hopefully will be more peace for the people left behind.

Jason had a therapy dog he brought to his office where he saw his patients. Maggie had a real following and still does. I know she is giving comfort to Tony, Jason's finance, and I know she is cared for and loved. I know in my own life, I have lived with many, many animals, some who have gone through great loss, separation, hard times, or neglect. I've seen that animals do not react to death the way humans do, and why would they? I am not going to say animals do not grieve, I think they sense loss and grief. But I also think they accept it in a much different way than we do. I believe that animals, if given consistent companionship, food, shelter and caring, adjust to loss. I believe they sense our true intent, and they resonate with people that have consistent, pure intent.

I think of Tony a lot, and Jason's mother, and Maggie.

Posted by Katherine Dunn/Apifera Farm at 10:43 AM