The aging of the acrobatic goat 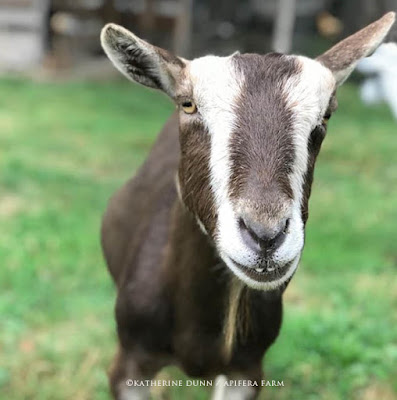 He once flew through the air with the greatest of ease, without a trapeze. Now, years later Wilbur the Acrobatic Goat is turning nine and beginning to show his elder status in both appearance and activity level. The other day, someone chewed his bear off a bit, shortening it.

I looked at all of them, lined up, and asked sternly,

"Who is chewing on Wilbur's beard?"

"His beard has shrunk considerably in the last few days," I said.

Opie stood forward. "It wasn't me but I know who it is," and he returned to the lineup.

"Opie, you are complicit by not telling me," I said.

Earnest came froward, "May I ask what the said consequences will be for the said perpetrator?"

Everyone hushed him up.

"Opie, I think you know more than you are telling, " I said. "I'm going to count to ten, and if a name comes out, everyone will get carrots, even the perpetrator," I said.

"It's ME, It was MEEEEE!" screamed Ollie in joy and he ran forward to get a hug.

So, I sat amongst them, and we ate carrots. And Ollie chewed on my buttons. 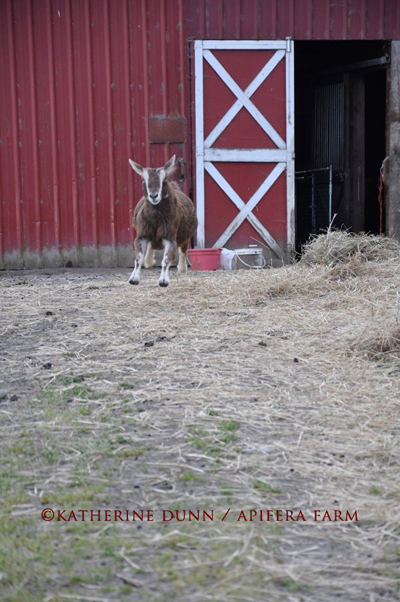 Posted by Katherine Dunn/Apifera Farm at 7:43 AM

Email ThisBlogThis!Share to TwitterShare to FacebookShare to Pinterest
Labels: Old goats of Apifera, The Misfits, Wilbur the acrobat goat