{I write a monthly article in Lincoln County News. This was last month's}

“But where is it I will go then?” asked little Opie, the very smallest of the goats, and youngest.

“You kind of don’t go anywhere, because your body becomes like rain drops and it goes back into the ground so in fact, you will be everywhere,” said Ollie, a bit older than Opie.

“So when you die, I will always be able to talk with you?” asked Opie.

“Sure!” said Ollie, and he romped off to eat a tree.

“It’s just like being the moon,” said Earnest, the very well read pig. “Your body is gone but you become the light of the moon.”

“And you become the sun, and stars and snow,” said old Else, one of the oldest goats.

The conversation had begun because one of the old cats had died, and the animals are always informed by the house boss lady when a death occurs. The animals had seen many herd mates die, and buried. While they don’t carry on in mourning the same way the humans often do, they revered death as an integral part of life, and they respected both. They feared neither. In fact, they sensed death much sooner than most humans. The boss lady always came out and calmly told them who had died, and then she would let them all see the animal lying in repose, and they could sniff the body if they choose. But they knew long before the boss lady when death occurred. It was an innate message but also a scent of the dying that alerted them.

“It sounds like being dead is a very busy time.” said Opie.

“Death is not that important,” said old Else, who was very crippled and old, and felt she was probably the next one to go. “What is important is a good death.”

“What is a good death?” asked Opie.

“Well, think about what it was like to be really little, and you were sitting around with your mother and father, and maybe some other friends, having a nice evening and meal together, and then you got sleepy since you were so young. And your mother tucked you into your straw and kissed you goodnight, and as you fell off to sleep you could hear her and the others chewing their cud, and the moon was out over the barn and maybe you could hear the wind, or smell the ocean nearby...and just like that, you are asleep. That would be a good death,” said Else.

“That sounds okay,” said Opie. “And then when I wake up I would be rain or snow or the moon and you could still see me anytime.”

“That’s right, Opie, all the energy and love in your little body just gets bigger and bigger.”

“I’ve always wanted to be bigger and bigger,” said the little goat in the barnyard. And he ran off to help Ollie eat the tree. “Is this tree someone we once knew?” he asked. 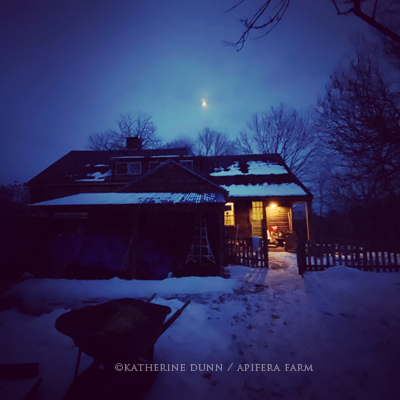 Posted by Katherine Dunn/Apifera Farm at 8:16 AM

Email ThisBlogThis!Share to TwitterShare to FacebookShare to Pinterest
Labels: Else, Wisdom

Love this. a LOT.