Mothers and dogs uniting us 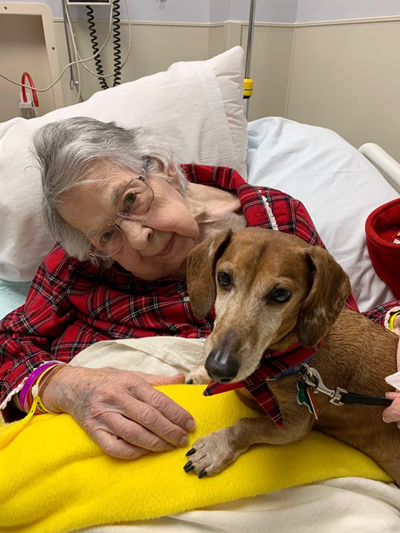 I think people come and go in our lives, some pass by once and make a huge impact, some come and go, teaching us what we need at the moment, some leave and some don't, some remain strangers but they still impact us. Who knows how we each impact someone from afar? Last year I wrote the book called "Little Tulip" starring a little dachshund named Tulip. It was inspired by real people in my life, a composite of elders I knew who told me how they hated when people 'detracted' from their lives-case in point, when people told them they were too old to get another dog. In the book, Mrs. Storey [a real friend of my youth] loses her husband of 60 years. They used to have a dog. She is told many reasons why she should not get a dog. But one comes into her life, and she names it Tulip because she and her husband loved to plant tulips.

Sometime in there one of my followers shared the Tulip in her life, a little dachshund named Fritz who was owned by her mother, who was well into her 90's. She would share a picture or two over the coming months of Fritz and her mother. Well, she informed me one day that her mother was transitioning, and she wanted more "Little Tulip" books for family. Soon after, days I think, she let me know her mother died. She shared this picture of her mother three weeks before her journey. It felt just like the book when Tulip sits with Mrs. Storey.

Her mother died on my mother's birthday. The book shared a mantra that was shared with me when my mother died. On the day of her death, a college friend called me out of the blue and I had not talked to her for 30 years. She had lost both her parents. And she came right to the point [thank you, Sam for calling that day]. She said, "Your mother is okay." While that might seem simplistic, it was the most powerful thing anyone said to me in that time of grief. She wasn't suffering, she wasn't dying, she wasn't gone of earth but she was okay. Whenever I think of anyone-human or creature-that I grieve, I remember that, they are okay. And now that story about a little dachshund named Tulip also carried with it that mantra my friend shared-it will be okay-and someone else was sharing the book with those grieving their mother.
Posted by Katherine Dunn/Apifera Farm at 8:22 AM