Perhaps the most poignant moment ever 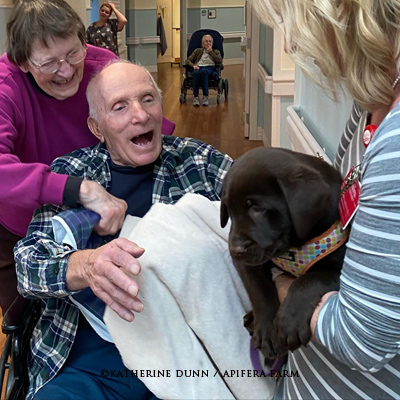 Yesterday I took both Bear and Opie to the elder home for their weekly visit. I wanted to try having both of them there, and I had Polly my assistant volunteer with me and it worked out really well. Opie was in his cart making rounds, and I covered another area of the home with Bear. Again I had his little wagon so when he got tuckered out he could rest.

He did great. I wondered if last week was a fluke but I was so touched by him, and his behavior. He is a bit more puppy like now with another week of living under his belt, but he was calm and focused much of the time. We let him down to walk too and what just slayed me was he would sit on command, watch for me, wait for my next move. We've been working on that in the house-he is rewarded when he is calm with praise and love, when not I ignore him. I've been teaching him tosit, off leash and I couldn't believe it when he was able to be so focused at our visit-everyone ooohed and awed, and I was very proud of him.

But the moment captured in this photo is one of the more poignant moments of my animal therapy career. This is John and last week I told you how he lit up when he met Bear, and that was the first time I'd seen him smile or be animated. He held Bear and just was so happy the entire time. His wife visits him twice a day every day. Well, when we got there yesterday people were excited to see Bear and Opie, and at some point I noticed John and his wife coming down the hall. About 15 feet from us, John saw the puppy and he stretched his arms out, smiling, until he got wheeled up to Bear.

My heart nearly broke into a million pieces.

Posted by Katherine Dunn/Apifera Farm at 11:05 AM

We are long time fellow travelers, dogs
and folks. The joy so plain to see is no
surprise when I consider that. Cousins,
brothers and sisters in our lives. You
are the best kind of joy therapist.