Everyone is spuddling and the pig swoons over a poet 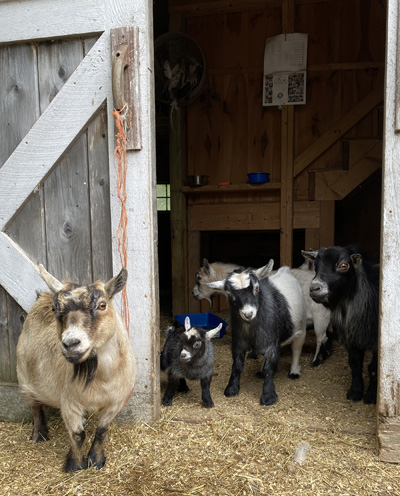 I entered the barn  to do chores and Pickles came running to me.

“Mrs. Dunn, we’ve been spuddling!” she declared, and she ran out to the barnyard.

I had no idea what that meant but figured it had to do with one of the new goat arrivals, who Pickles had named Puddles.

Pickles and Puddles came running in the barn, looking rather exhausted.

“Spuddle is a useful verb from the 17th century that means to work feebly and ineffectively, because your mind is elsewhere or you haven't quite woken up yet,” said Earnest the pig.

Well, if Earnest knows the word, it must be a word, I thought.

“Thank you, Earnest, it is most certainly a useful word,” I said.

“Do you spuddle?” asked Puddles.

I fed the animals their hay and then sat a spell on a large boulder in the goat paddock. Puddles had been one of five newcomers to the farm that week. We brought home two more elder lady goats, including Puddle’s mother, and another little baby goat that needed a home that had lost her mother. Puddles called his mother Mrs. Puddles, not mama or mom or mother, but Mrs. Puddles out of respect.

“Perfect for spuddling,” said Ollie the goat as he walked by.

“We can’t all spuddle at once or nothing will get done,” I said.

“I guess since my name is Puddles ,I’m a spuddled Puddles!” Puddles said.

“I think they will grow tired of this,” Earnest the pig whispered to me.

Just then one of the older goats, named Poetry, wandered over and took a seat next to me.

“I’m old. I don’t intend to spuddle, but it seems I spuddle more and more. It bothers me. But then, I forget I’m spuddling and it really doesn’t matter,” she said.

She was named Poetry because she came from a family of poets. She often could be heard reciting poems while all the others were falling off to sleep. Earnest the pig was charmed by Poetry.

“An older lady who recites Whitman at sunset is a fine lady indeed,” said Earnest with a sparkle in his eye.

I got up to get back to work.

That night, since it was so hot out, I was sitting in the garden in the dark, catching a light breeze from the cove. The fireflies were out. There was hardly a sound. But then I heard it, the sweet voice of an old goat, reciting the words of Whitman, and the gentle snoring of Earnest the pig.


Posted by Katherine Dunn/Apifera Farm at 5:02 AM