Harry goes to town...what an impromptu stroll with a llama is like 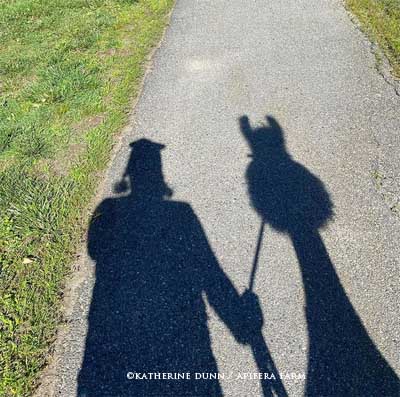 Our final destination would be the closing reception of Polly's art show, but Harry and I [and my very wonderful volunteer, Joan] had some time so we decided to take a stroll down through our little village of Damariscotta. I have done this before with Harry and the looks and expressions from people is priceless. It brings sheer joy to so many. Plus I wanted to say hello to the new shopkeepers of The Kingfisher and The Queen, a new beautiful shop on Main St. The owners actually lived in our house and sold it to us. We had a great visit and I will be going back, maybe to get some of my art and books in their store.

Anyway, many things happen when you walk a llama in the village. 90% of the cars going by slow down, roll down windows and take snapshots, and smile. The 10% that are expressionless  must be having very bad days to not smile at a llama [and there are many reasons why people can be having bad days, so Harry and I understand]. We were walking by the bookstore where people hang out and drink coffee, many with dogs, and the dogs just don't know what to do about Harry. I apologize tot he gentleman that had to leave because his very large shepherd became out of control. Harry is not concerned about dogs however. When we got to one corner, a little girl of about 10 was rounding the corner and her mouth just dropped open and she couldn't move. It was so funny. The diners at King Eider's were pleased, and of course I had to walk by Colby & Gale and say hi to our gas guy. We stopped at The Kingfisher and talked for some time to the shopkeepers and then headed to the reception.

As we walked up the busy main street, a guy was driving by with rap on and yelled out to the rap song, "Llama llama". At one of the busiest stop light intersections, where the oncoming traffic had the green light, cars stopped to let us cross. A man yelled out a window in a Maine accent, "Now I've seen everything."

I always say that when I do a village walk I should send a quick notice to the paper so people know we are coming. But I always realize part of the fun of these walks is they are a total surprise to everyone, including me.

The reception was in a shady, breesy spot overlooking the water. Harry did just fine. I did learn though that due to the tight quarters he had the new experience of having people all around his body which he had to adjust to. He did just fine but it was a new experience for him. My volunteer noticed he seemed to take notice of black cars too... interesting!

The art reception raised more than $3,000 for Apifera. Polly is in the throes of living with stage 4 lung cancer. She is having a series of art sales and is giving all of it to Apifera. She volunteered for us and really believes in our animal healing work with elder people. I got to meet her relatives and friends and people said such nice things about us.

I was also a bit verklempt when I saw David's daughter's there, because I had David's Bells on Harry [ I always do-as I wrote in an earlier post it was one of the most meaningful gifts ever given to me] and they were touched to see the bells. We all said how happy that would have made him.

I don't know how it will play out for Polly. None of us do. She is being practical though, with optimism. I hope to get her to the farm in the coming weeks with help of her friends. She said she would like that a lot. We all have to face death. We have very little choice in how we die. We can make choices while facing impending death, get the house ready so to speak. I know if I was facing death I would have lots of things I would want figured out-like animal care and all that. I suppose though, I feel this, that at some point...we give in, we breathe, we relax to what is coming. 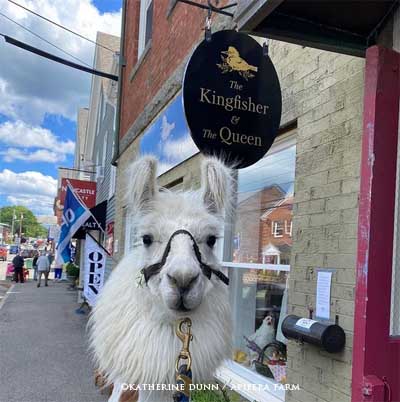 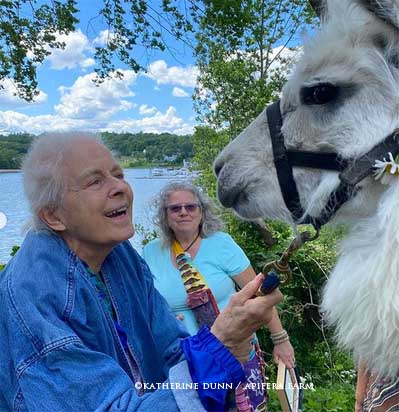 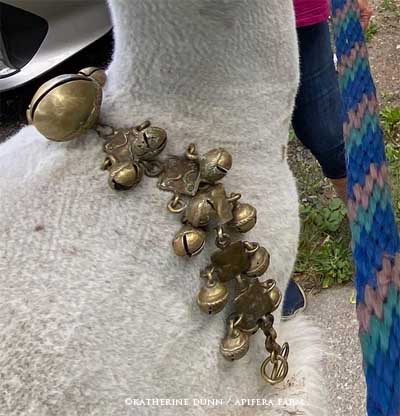 Email ThisBlogThis!Share to TwitterShare to FacebookShare to Pinterest
Labels: Harry Goes to Town, Harry the llama