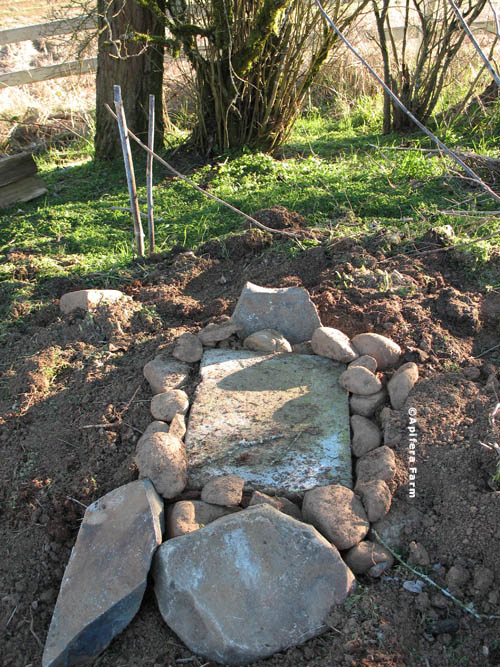 I opened the door to the pump house, and gasped. At first I thought he was alive - his body all curled up in a typical cat sleeping
pose, his tail twined tight around his body like a scarf. He was in clear sight, tucked into the corner of the 10 x 10 shed, snuggled down in some fallen insulation mixed with hay. I guess I knew he was dead, but as I got closer, he looked so peaceful...maybe...no. He was dead.

There were no signs of stress or trauma really. His little orange head was tucked in between his paws. I examined his body, and the only sign of distress was right around one side of his nose, which looked liked the skin had rubbed off. His eyes were still there, no other creatures or maggots had started their work on him. I examined his body for wounds or bullets, nothing, except a few drops of red blood exiting his rear end. I thought maybe he had fallen and died of trauma, but, it didn't add up.

Pumpkinhead disappeared on January 4th - there is no way his body would have looked as it did when I found it if he had died that long ago. In fact, I've dealt with enough dead animals now in various stages out here, and we think he might have been dead only a day at most. He just wasn't that stiff, and animals stiffen up very fast. Why didn't he come back to the porch? To add to the mystery, Martyn had entered the pump shed two times last week, and there was no Pumpkinhead in the corner. If he had been alive, and able, he would have fled from Martyn, as he is more acclimated to me. This means he crawled into the pump house shortly before I found his body. 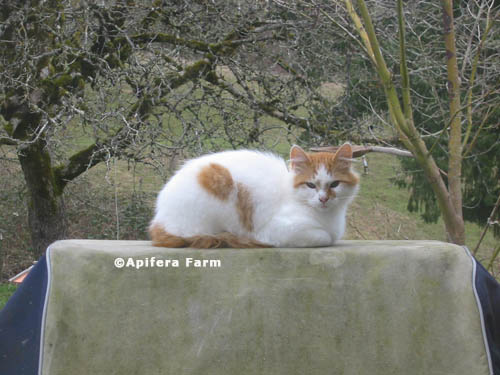 I'm only happy I found him, and then he did actually die in a safe spot. I carried him to the front porch, where Mama and Little Orange were. Orange is the only one of that litter left. He sat with the body like a dutiful brother for a minute or two, then went off to the garden. It was I who was pushing my human emotions onto the scene. The animals had already moved on. I buried him at the side garden, under lilacs and quince, a favorite cat hang out, especially in rain or hot weather. I will paint or engrave his tombstone in spring.
Posted by Katherine Dunn/Apifera Farm at 10:05 AM

Oh Katherine, how sad. I'm glad you found him; there is some comfort in that closure, and in seeing that he doesn't seem to have suffered.

Hugs from me, Mack and Lucy.

I'm also very sorry to hear about your loss. But as Cathy said, at least the mystery is solved and he looks like he died somewhat peacefully. Ever since your first entry about him being missing, I was still holding out hope that you would find him safe. This is very sad indeed.

So sorry for your loss but also glad you got some closure and got to say good bye.

So sorry for your loss.

I am so sorry for yur loss. I know how very much you love your animals.

So sorry for you, and so glad you found him and that he seems to have had a good time before curling up.

Thank you so much for the links in the last post, I don'r have time to sit here any longer but had to look at all the photographs in a hurry, will go back!

katherine, i'm sending a big hug. sweet little pumpkinhead...i guess he felt your worried heart and went in the pump house so you could find him and say a proper goodbye... our animals always seem to be worrying more about us, worrying about them. xo

Oh no! Pumpkinhead was my favorite of your cats. I still laugh when I think about the time you told us that he actually thinks he is a pumpkin. ; )

These wonderful creatures who decide to share their lives with us are all so sweet. It's always so hard to lose them. (How interesting - I just accidentally typed 'love' instead of 'lose' . . .)

I'm sorry about Pumpkinhead... that IS a mystery why he never returned to the porch... He was a cute little guy, wasn't he?

Thanks everyone - it's nice to have understanding, even over internet lines. He was a cute little guy - I had this horrible urge, to keep his tail - isn't that sick? He had the most wonderful red, fluffy tail. It seemed still so alive when I found him. Funny how the living try to comfort themselves with pieces of the past one...

I´m so sorry for you and the farm. Living with so many animals is obviously a steady process of being close to birth and death. I find it very hard to deal with the last one. But at least living with them is worth the sorrows, right? A warm hug