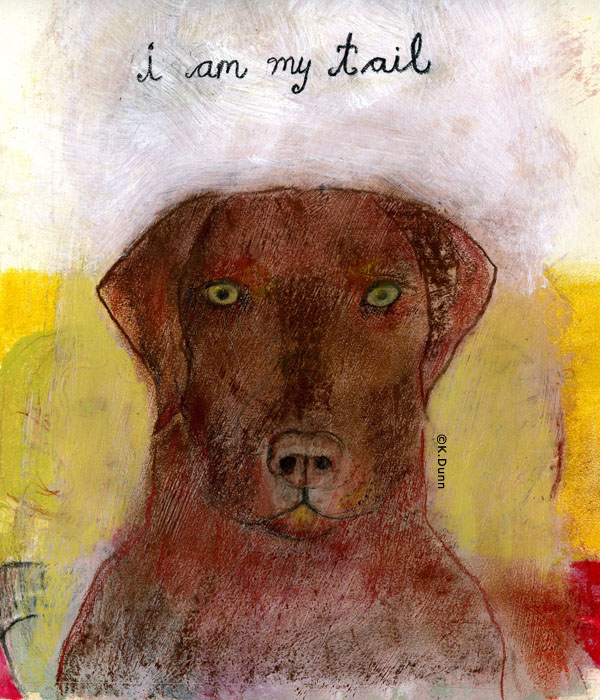 I did a little series about Huck and his tail this week, intended as a promo to a select group of past clients. I've been wanting to write a story about Huck's tail, but it's still just one of a myriad of ideas mushed in my head.

For those of you who haven't met Huck, you can read about his 'Guide to Happiness" here - and it's completely free.

I also want to mention two upcoming shows of artists I love and admire.
One is Dan Dutton, who I am just coming to know. This man has whim, incredible drawing ability, is a musician, a story teller, and he lives in a magical cabin in the woods of Kentucky. He has an upcoming performance "The Faun" in historical Louisville, Kentucky at the 21C Museum [Jan 31-Feb 1].

Then there is the upcoming show of Ward Schumaker's books and drawings at the Meridian Gallery in San Francisco [Jan 24 - March 1]. I only wish I could be there. I've loved his work for a long time. Ward is married to my all time favorite Vivienne Flesher. I broke the news to them that I named one of my new hens Vivienne, and it seemed only logical to name the new rooster Ward. They took the news well. Not everyone would, but in our family, having any animal named after you is considered an honor. If I could just teach Ward Schumaker the rooster to draw like Ward Schumaker the artist, I'd be on to something.
Posted by Katherine Dunn/Apifera Farm at 2:47 PM

i love Huck's new series! the other day i layed down next to Oso and just talked (and sang) to his tail! and i got to daydreaming about tails as pets, how all they'd need is lovin' and to be talked to and they'd wag and wave and twirl in return. ahhh. it was a fun daydream.

anyway, the new pieces are oh-so fun! i always tell Oso that i'll write a book for (about) him someday, too. he's the best dog in the world, so it's the least i can do, i tell him.

thanks for the link to Ward's new work. so inspiring. they're really awesome.

Hello,
I have been a long time viewer of your blog and really appreciate your writing, artwork and compassion for animals/nature.

I will be stopping by the Meridian Gallery since I live in the area. I didn't know about the show until you posting it ... Thank you!

Hi Kathryn,
I haven't talked to you in such a long time! Your blog just gets better and better! We were just up in Washington for Christmas. I was so happy to be there....among all the beautiful green trees and the ocean! I had wanted to call you to see if we could have come by to see you, but we just didn't get a chance to./I recently posted some little film snippets on my blog! Hope you'll visit and tell me what you think! Thank you so much for your wonderful humor and creativity!!
Debbie

worlds colliding! i just--I mean, JUST--made a post about 21 C museum hotel this morning, and now i'm reading about dan dutton's upcoming exhibition/performance there. i love it when things come together like that. i also love donkeys. hope all's well on the farm!

this post about tails reminded me of a hilarious comment that my daughter kiran made. she's in the midst of losing teeth, so has become well-acquainted with the tooth fairy. before bed, on an unrelated note, i often tease her about her lack of a tail- where's your tail? do children have tails?

so last night she said in response to some silly comment of mine about where her tail has gone, 'well you know what happened to my tail, it got all loose and fell off and i put it under my pillow and the tail fairy came and got it."
when i saw this post about huck and his tail, i couldn't help but think that he has some in with the tail fairy, too.