A story of two Thelmas 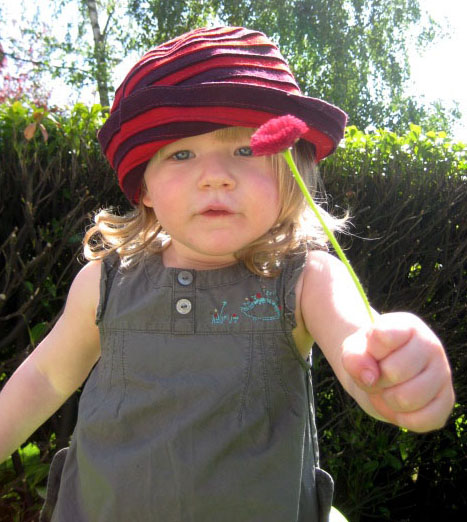 As a freelance artist living in a rural area, I can feel isolated, like I am not connecting with anyone. This can feel especially depressing when one is not reaping the rewards of new projects and art sales.But right about when I feel at the peek of disappointment in the universe, something magical happens as a reminder that one is always connecting, it just is not always visible at the moment. And sometimes it's presented in a slightly different package. Such was the situation when I got an email from a young mother in France, who wanted to buy a little painting for her daughter, Thelma. This purchase started a correspondence, and very soon, I realized the universe had introduced me to young Mlle. Thelma as a reminder - my art is here for many reasons, and one is that there are people out there ready to embrace it.

After Mlle. Thelma's mother bought one painting, I showed her another I had done years earlier. A very special piece I created to honor a woman named Thelma, who loved flowers, picnics. pies and life. I took Thelma's picture and collaged it into one of the flowers on the painting. Over the years it almost sold a million times, but always seem to stay here with me. Well, I just thought I had to show it to Mlle. Thelma's mother, just for fun. She wrote back that she simply had to have it for her own Thelma's room, as it reminder her so much of her daughter. 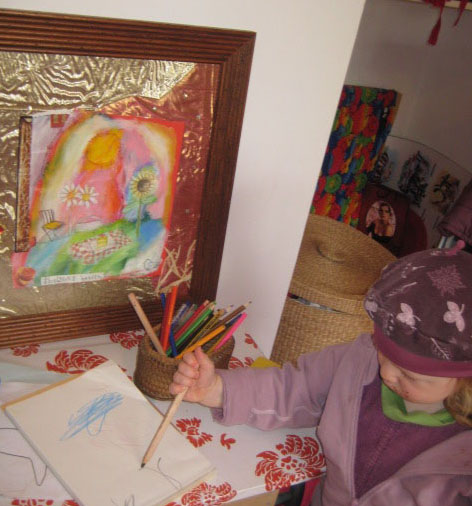 Well, it seems Mlle. Thelma had to have a small garage sale to earn some money to pay for the painting, and she sold off many of her old baby items. Within a month, she had enough money to buy the painting.I packaged it up the art with little images of singing cats and French greetings to Thelma all over the wrapping, and placed other little goodies inside. I knew Thelma had a hankering for cats and knew she would love opening the many layers. 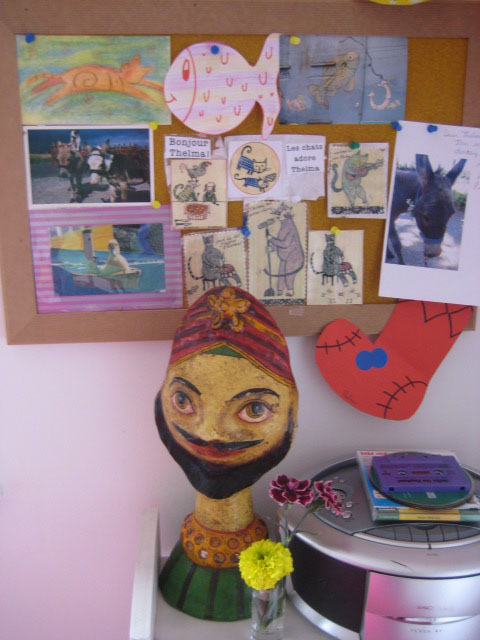 Her mother wrote about the package's arrival: " I wish I had filmed the arrival of your package - it caused us to be a half an hour late to Thelma's playschool ! We were heading out the door when the postman delivered it - we did a quick U turn back inside bubbling with excitement. Thelma knew immediately that it was for her - the cats, I'm sure! She examined each one very, very carefully and we read their greetings to her. She was absolutely over the moon and kept repeating " Regarde daddy , bonjour Thelma, bonjour les chats". She was delighted. We were dying to look inside but she wouldn't let go of the box for us to open it - it was hers and she was keeping it! After many minutes of coaxing and telling her that there might be another cat inside she let it go. There was another cat inside and she claimed it before we could say or do

anything. Thelma has spent the past two weeks deciding where to hang it but still hasn't found the "right" spot!(see photo below of her trying a spot).Pino and all the cats from the package are now hanging on her notice board in her room." The other thing I just love is Mlle. Thelma's mother framed the painting surrounded in Thelma's first princess dress, now too small, sprinkled with silver stars and hearts, a ruby and some straw from the Apifera package. She thought it looked heavenly, with magic and theatrics tossed in - very much like Mlle. Thelma.

Mlle. Thelma thinks that the painting "Thelma's Heaven" is really about her, which is fine with me. I wrote a story on the back of the painting, so when she grows, she can read it. I think somehow, the now long gone woman named Thelma, honored in the painting, was meant to be in Mlle. Thelma's magical world.

"Once there was a little girl named Thelma who grew up to be
a woman named Thelma. She loved pie and picnics and all things
that walked on four legs, or many legs, like bugs.

Thelma loved flowers and she liked to pick them while she ate pie.
She would sit with her flowers and think how lucky she was
to sit in such a beautiful garden and have a picnic all to herself.

Thelma lived a long and happy life. She lives on in the flowers, and
when you see a flower at a picnic, you should say,
“Bonjour Thelma! I see you in the flowers today!”

Years after Thelma the woman became a flower, a little girl came
to the earth. Her name was Thelma too! And she lived in France.
She loved bugs and cats and she slept in her belly.

The little girl named Thelma loved to pick flowers, and when she did,
the flowers smiled." 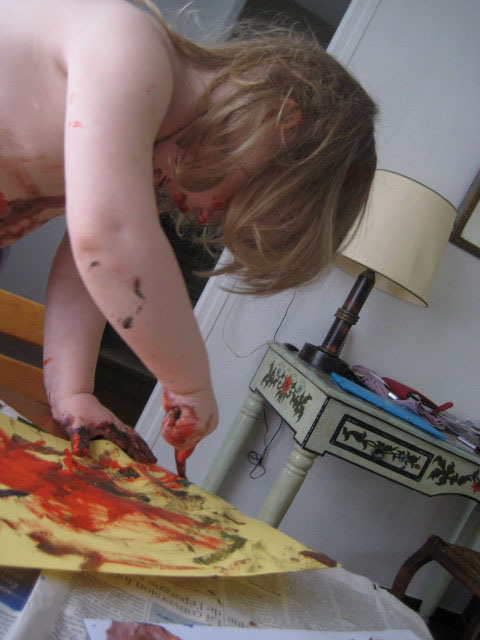 Thelma is an avid artiste and painter in her own right. Her mother sent me a short video of her painting with her little sing-song voice as she works away, "painting in her belly" [this is how Mlle. Thelma states she is naked without pajamas].

So, I have been charmed by a two year old. Not a surprise, really. But I feel really lucky to have met her, and to also meet a mother encouraging her artistic bent, and reveling in it. I hope I will watch her grow, if only from a distance. My art brought joy to a little house in France, and the reverberations have traveled across oceans and mountains to rest in my heart.
Posted by Katherine Dunn/Apifera Farm at 10:02 AM

This is such a lovely story! How wonderful to have your art, and your memory of your friend, resonate with this little girl so far away.

It sounds like you had as much fun putting the package together as Mlle. Thelma did opening it.

What a perfect story~ thank you so much for sharing it!

Thank you for sharing this. It brings tears to my eyes.

What a precious story!!!! (and photos) Love this.

Katherine... what an INCREDIBLE tale... Thelma is QUITE the inspiration!!

I love it... how the universe always knows just what we need ... when we might be feeling a little blue!

You have created fans for life from Mlle and her adorable daughter.

What a beautiful beautiful story. This is what is all about! Petite Thelma est très belle.

that's it. i'm painting without any clothes on today! hee. sorry, just looks so fun. that little Mlle. Thelma is awesome. what an inspiration she is in so many ways! and p.s. her picture up top could be you, from the baby pics i've seen...i thought it was for a sec.

Katherine,
I love this post. Thank you so much...mare

Thelma 2nd says "Coucou Katherine, Do you think I could try your red tractor someday?"

Big, big, big pain in your belly, lots of love and thank you - you are a very special person.

what a sweet story. Thelma you are superb!

I knew you would melt for that face!
And Bonjour Thelma! Everyone at the farm wants to meet you, especially les chats-