Life in an ornament 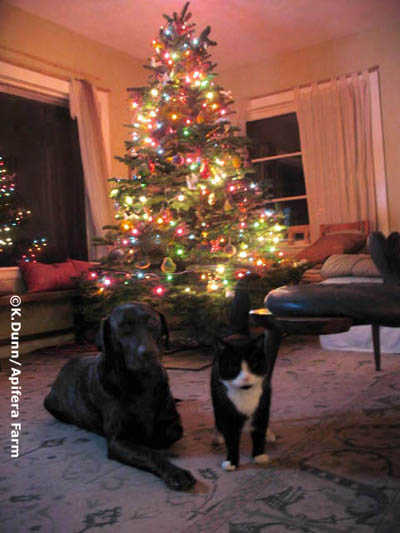 We haven't had a tree at the farm since we moved here in 2004. I had become somewhat lazy about Christmas in the past 10 years or so. I felt if you can't keep in touch with people during the year, that cramming gifts and parties and cards into one week, with people you don't have a daily relationship seemed very contrived. Christmas is all year or it isn't in my mind. And I had started the ritual of sharing my message on New Year's or January, when the whole year sits waiting, breathing, anticipating all my steps and missteps.

But this year, Martyn really wanted a tree, and I went right along with it. And since Huck is now a well mannered gent, we thought there was little chance of his tail taking the tree down in one wag. The fire was made, the music was cued to Louis Armstrong's Christmas songs, and Martyn was cooking something with butter and garlic in the kitchen. Perfect tree decorating ambiance. I conquered the lights with ease, which was shocking, but I was quite please with myself. I brought out all the jeweled fruit that I'd invested in for my first Christmas in Oregon - grapes, lemons, apples, pears and kiwis. They look wonderful in the lights and I liked the natural theme of ornaments mimicking earth's bounty. I added the white birds to remind me of freedom, and hope.

I thought the tree looked just right, but there was one more box of ornaments I hadn't opened. It was the box of ornaments passed on to me from my parents, most of them vintage pieces from before I was born. A few years back when they moved, they had stopped doing a holiday tree, so felt I'd enjoy them in my new life in Oregon. I looked at the box and hesitated to open it - so many connections to the little silver fishes and stars inside. Even the hooks were as old as me. They were so carefully wrapped, and I began opening them just to look at them. But as I opened one after another, I had vintage movies playing in my head, that made me happy in a melancholy way. Images of the many house we lived in and my brother and I decorating the tree, the various dogs we had that would be at our feet as we decorated. We'd have a plate of cookies near by, no doubt.

But there were four ornaments I really hesitated to open. I knew them by their larger round shape, still wrapped in tissue for protection. The year my parents were married, my father's mother had two ornaments made, one for my dad and one for my mom. Their names were hand painted on the creamy glazed porcelain balls, and the year, 1956. Each ornament had little hand painted items, symbolizing each person's hobbies or life. When my brother was born the following year, my grandmother made him an ornament too. Sadly the following March, my grandmother died, only hours before I was born. But that following Christmas of 1958, my mother had an ornament made for me with a little pink dinosaur painted on it, with braids, my favorite toy.

But it was my father's ornament I happened to reopen first this nite of tree decorating. "Bob", "1956" was painted on the round ball along with an image of his Siamese cat named Anna. And of course, a pipe. He always smoked a pipe. I looked at that ornament for seconds, held it, and thought of all the trees it had hung on in it's 53 years. We always treated those four ornaments with respect, and even though they didn't cost that much, they were invaluable in memory and how they were given. I got a little sad, then emotional for a few seconds as I looked at my dad's ornament, but that's okay. It was just love pinching me a little. I didn't put those ornaments on the tree this year. Just looking at them again brought me many happy memories, but the tree I decorated was a tree that held ornaments soaking up new memories, with my husband, and Huck at my feet.

When my father died almost two years ago, my mother in law wrote me a lovely note, and said that since her father died some 40 years earlier she had thought of him every day in one way or another. At first I thought that was quite depressing. But it isn't. I do think of my father every day, in so many small ways. Some days the thoughts linger, and some days I just wish I could have a cup of coffee with him. But mostly, I just think of him and go about the day. Materialism doesn't lead to happiness, it never has and never will. But a simple object can hold a lifetime in it, and bring back moments of true love. Or to say it more accurately, true love for another person never fades and can bring any object to life.
Posted by Katherine Dunn/Apifera Farm at 6:02 PM

I know what you mean. My mom's hands created many small, meaningful gifts for me, and each time my eyes fall on them, I think of her.

Her spirit imbues a set of four cross-stitched ornaments that always make me smile as I unwrap and hang them on the tree. It is Good to have that connection with such a strong source of love.

well said Katherine, and oh so true...I like to think of the little material things that remind me of those I love who have passed on as triggers...little opportunities to pay them a visit in my mind, to think of all the lessons they taught me and happiness they brought...

A great post to wake up to. Thanks. My own home video movies are playing in my head right now.

What a beautiful post. I sit here with tears in my eyes...not of saddness, but of joy, remembering the love for my father and the many happy times we shared together. Your tree is lovely and I am sure will bring much happiness to you and yours this Christmas.

What a beautiful post (and a beautiful tree). I lost my dad 10 years ago on Nov. 30. I still miss him, and sometimes even more now than I did when he first died. Christmas is always tough, because, after all, what is Christmas for many of us but tradition and memories? Luckily, I have so many good memories (and funny ones, like the Christmas he was repairing the lights and set his pants on fire) that it's OK if love pinches me once in a while. And one of my favorite things this time of year is to take a quiet evening, turn on the tree and just look all around at the ornaments, and remember the story behind each. Because every person behind those stories feels a little bit closer this time of year, even if they're no longer with us.

A beautiful post. Several years ago I sold my two and a half storey house and moved to another part of the province and into an apartment. In doing so I stripped out a great deal of the material "stuff" from my life. But there are some things I hold on to for the very purpose you describe here - for the memories and "internal snapshots" they hold. In fact I had a similar experience recently, recalling moments from my life as I cleaned my bookshelves, on which sit books marking points of my life as well as my children and my parents and others that came before me. Thanks for reminding me of that magic.

Thanks for this post, Katherine. As a museum curator I think a lot about these relationships between objects, memories, people's stories and emotions, and it is wonderful how you articulated this synergy in this post. I stumbled on your blog a while ago and very much enjoy reading about your farm and your perspective on life - especially when I need a dose of humanity and compassion to cheer me up!

That's a lovely post and the photo illustrates it so well.