The Tail of Huck 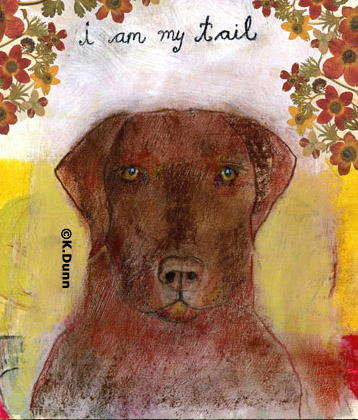 Each morning, before the man and woman of the house rose, his velvet brown ears pricked up as he heard the first birds sing, or perhaps it was a far off rooster.

"It's here." he thought, still laying on the couch, but now stretching.

He rose quietly, and reached under the couch to pick up his long brown tail. Unbeknowdst to anyone in the house, he had been taking his tail off each night, and placing it under the couch. This allowed him greater freedom in his sleeping positions, but more importantly, it allowed his tail the chance to recharge it's energy supply needed for the new day.

He found that he somewhat missed the feeling of having his tail on at night. But after a couple of nights of being tailless, he like the freedom of sleeping unencumbered from it, and he also found that his tail was able to keep up much better the following day, giving off signs of joy that so many seemed to have come to expect of him.

For his gift to the world was simple: spread happiness every second.He shared this happiness in many ways, through smiles, and scooter dances around the table, or funny sounds. But it was his tail that had an entire dictionary of happy words. Fast happy, sort of happy, tired happy, I'm sleeping but you are petting me happy, food happy, play happy. His tail was truly an entity of it's own. He wasn't sure, but he felt it was possible that his entire soul resided in his tail, if it was housed in some way. 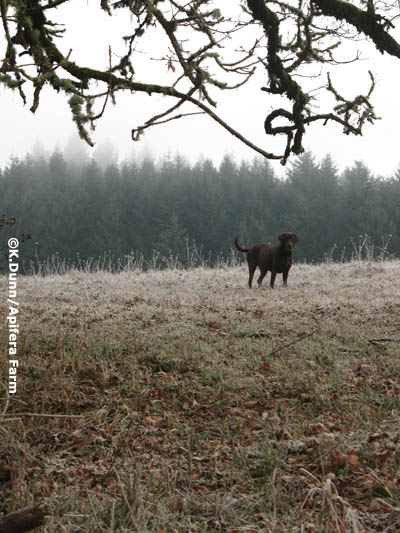 He'd heard the brain gave the body commands, but he was quite positive that the first commands went directly to his tail, before sending out messages to various organs, nerves and receptor cells.

Once his tail was on in the morning, there was no turning back. The day had to go forward and it always did, but only after his tail was back on. He took the responsibility of sharing his happiness very seriously. "If I don't put my tail on, the day won't start, and then I can't make them happy."

But it was his morning romp with the woman that allowed him to wear his tail, and share happiness, but somehow feel free from it all. The daily responsibility of making sure he was smiling and working his tail were put aside for 20 minutes or so. It had dawned on him one day that she did this for him, she took him out on his morning romp so he could revel in his own happiness and not worry about hers.

On those morning romps, he was just a dog with a tail.
Posted by Katherine Dunn/Apifera Farm at 11:03 AM