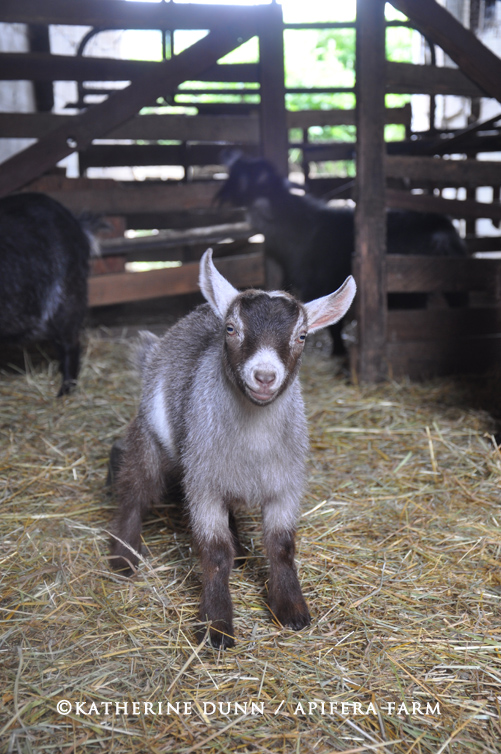 If you follow along here, you know I am committed to taking in old or challenged animals and that has not changed. But after 10 years of helping a multitude of Misfits, coupled with the deaths of my mother and The Old One Eyed Pug, something in me yearned for new life, young life.

I had always wanted a baby Pygmy goat. And now I have one - thanks to an Apifera supporter up in Washington who happened to have a surprise buckling or two. This little fellow is charming! And a real talker - although at 2 months old he was weaned but not separated from his mom so the chatter will most likely subside a bit as he settles in.

I like mixing the ages - if it works - I felt Old Rudy would be a good stall mate for the little fellow, and it seemed to work just fine last night. This morning, they ate together without any fuss. He is a pistol! I forgot how active and resilient they are to anything - leaping off rocks and up onto walls....curious, active, alive.

When I introduced him to the Misfits, he quickly learned who was in charge - The Head Troll - and he learned Stevie is very gentle [although he also learned boundaries with other's food] and he learned not to sneak up on The Pig! He has figured out that when I come out, good things usually happen, like treats and back scratches.

I haven't named him yet, but this morning I heard two words in my head - Little Moose. We'll see if that is the name that selected him.

But the story gets better.

You see, the day I called Martyn to tell him my mother died back on April 4th, he was at a job site working. As he tried to digest the sad news, a gust of wind blew in and around him, almost blowing him off balance, and he retold it to me later explaining he felt it was Kelly saying good bye. Martyn is not a talker of spirituality, so when he told me this story I was really moved by it. He went on to tell me that the wind led the way as he walked up the hill and then it was gone but the sun broke through. He came upon the owners baby pygmy goats. In the next days, I was reeling from my mother's death, and then had to bury The Old One Eyed Pug. I told Martyn I yearned to bring on a baby animal of some kind. In his mind, he thought of the baby pygmies he had just seen, but he didn't mention it. Unbeknowst to him, I'd also mentioned it to my friend, who said she'd let me buy one of her babies. So Martyn went and agreed to adopt one of his client's pygmies as a gift for me. When he found out I was bringing home a baby pygmy, he confessed, but told me he felt it was meant to be that I should have both babies and that my mother had a hand in it.

So on Sunday, we will drive east a bit to pick up another baby Pygmy. How's that for a continuing love story? 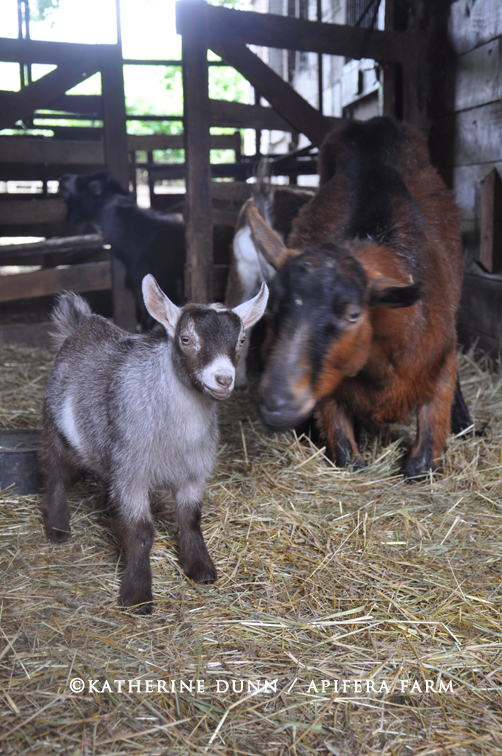 Posted by Katherine Dunn/Apifera Farm at 11:36 AM

He's awfully cute and I'm sure he will like having another little playmate to get into trouble with.

Oh what fun those two will have! How lovely for you and your storytelling. I can't wait to hear about life with your babies. xo

(I think the pug sent one too.)
Wonderful experience!