When creatives go to the fog 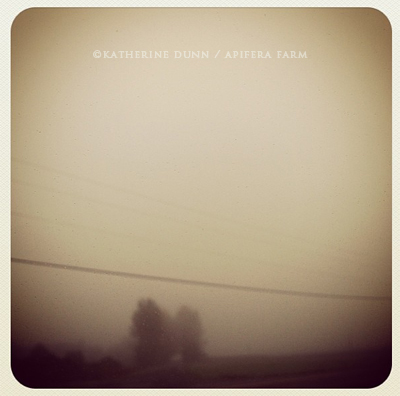 When I look back at many of my paintings in early days here in Oregon, my work was always covered in a luminous cloud, a covering of water droplets suspended in the atmosphere. How could I not see fog as a new muse, with its quiet beauty making my pastures, trees and sky meld into one beautiful blankets of payne's gray.

Today, I was thinking of another meaning of fog:
"...something that obscures and confuses a situation or someone's thought processes".

I feel like I am in a bit of that right now-with my career. And to all the artists and writer's out there, let's raise our glasses to being in a fog. I think it is here to help, not hinder.

I decided to visualize a linear line with each calender year on it, there would be a bold red dot at 1997. That is where I set forth like a brave and excited pioneer into the unknown world of illustration and freelancing. I was 39. Along this linear line there were explanation points, black dots, and dotted lines going downward and back up again. At 2002 there would be a big square in bright colors-the time I left Minneapolis for Oregon, married, and moved again to the farm. My illustration career was dipping, my medium was changing and I began writing, and painting. Things were evolving, my identity was shifting. I was still an artist, but was carving different zones for myself-sometimes without realizing it. I wrote some books along the way and the animals became a huge part of my soul and therefore my persona and identity as a creative person. So now as we land on 2014 on the linear line, there is a little cloud of fog.

I think the fog is here to help, not hinder. The fog is giving me a bit of a rest, to recharge, reexamine, shuffle the mediums and see what sticks. The fog creates a boundary from the public platform that demands so much for so little.

"What should I focus on today?" I ask myself. I really want to do another book, and would like to see a relationship with a publisher-even though my two self published books have paid off and I am glad I did it that way for those two books at that particular time. I just believe in my writing and books and would like to see a wider audience for them. I want to create clay creatures that will tell story three dimensionally. I'd still like to do a children's book or two. And I've started trying to get on paper an idea I've had for years...for a novel.

TAKE NOTE: This is not creative block. This is standing at a place, a passage in your life and career and knowing it is changing and you aren't sure where, how or when it will appear as settling into the new form.

I know there are other working creatives who have been honing their careers for as long or longer than me and I know they too can be covered in fog sometimes. I'm always inspired by other artist/writer's careers and to see how they expanded as they enter their sixties and move into their seventies, eighties and nineties.


Posted by Katherine Dunn/Apifera Farm at 11:49 AM

Thank you, Katherine. Just communicating with someone today about the magical properties of fog in myths and legends, and how passing through periods of obscurity or unknowing can transform and transport us to new realities. Also in Taoism, it is Formlessness that gives rise to all forms. Sometimes we do well to surrender to that mystery.

This is beautiful, Susan, thank you for sharing that. "Formlessness"...I love that comparison. Isn't all art and writing a beginning of formlessness..so good to remember. I hope you don't mind, if I share your comment on FB?

Please feel free, Katherine. Your sharing is so helpful to me.

Rather than 'fog' I prefer to call it 'gestation time'... quite often there are magical things brewing underground

I definitely think of 'the fog' as a good thing too. Gestation, searching, transforming... Good things :)