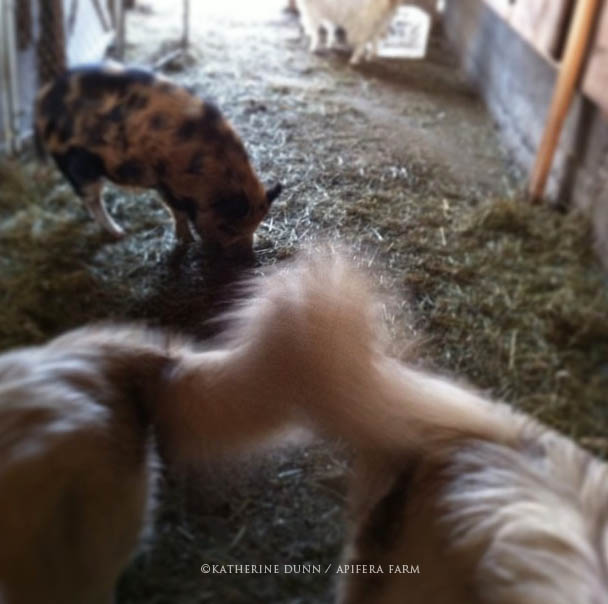 I think it is fair to say we are all enamoured with The White Dog. There are many who believe in his magic and I am one of them. If I sounded hesitant on my Facebook posts at times, it is only because if I admit it is magic, then magic could take him away. Perhaps he is going to be magic all over the county. One can't control magic, that is why it is...magic.

Marcella now has been given opportunities to run with him and she adores him. Sometimes she looks at him like he really is The Great White Hope...or better yet, someone to be a dog with. Maremmas are very unique and rare. They are like no other breed I've known. He looks very wolf like when he walks.

I have allowed the two Whites to interact for short periods and this morning he came into main barnyard. I think since Marcella's heat was in October I am safe, but it is a risk. But I'm with them and no hanky panky is going on. The White Dog has met all the animals including piglets and pigs. What was just so funny was he was not sure about Rosie, but was fine with all the others. Once again, Rosie has lived up to her grumpy stature in the welcoming committee!

I'm enjoying watching an older, mature Maremma. And how he reacts to the surroundings and other animals is so interesting. He is a perimeter walker it appears. Whereas Marcella tends to guard one spot-but that could change. And while I tried to keep myself silent, I have begun calling him Benedetto. As I said it yesterday's post, it literally came to me–visually–in my head the other day and I felt it was a gift. It means "blessing" in Italian.

I have an appointment to get Marcella spayed in a week and a half. And I will neuter White Dog too. While many were and are hoping this will turn out like a Turner and Hootch movie with a gaggle of white pups [oh, yes, I agree, it would be fun...]it would not be a reasonable thing. I am not experienced enough with Maremmas to breed and sell responsibly. My breeder has worked with these dogs on his farm for years and travels to speak and teach about them for working farms. I have no place doing that. And I think I kind of have enough going on. So no pups. {Sigh of relief from the all the Misfits...and The Dirt Farmer}.

However, there is always immaculate conception. I wouldn't put it past this creature. 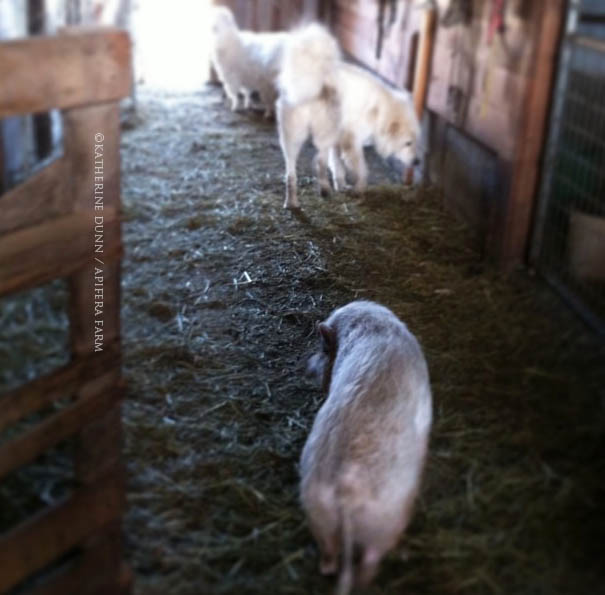 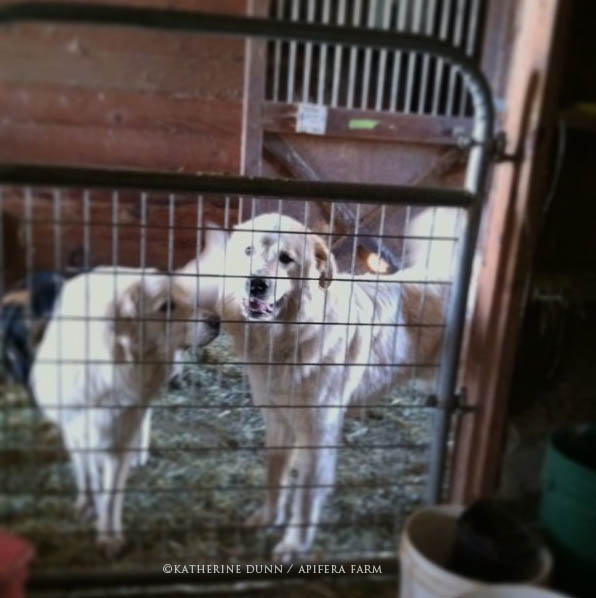 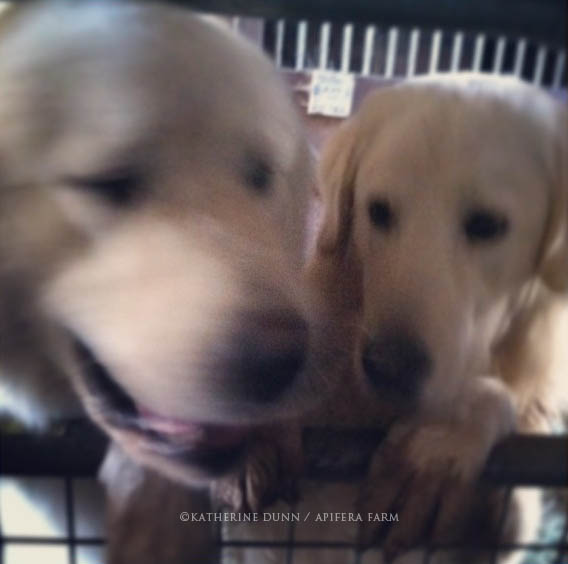 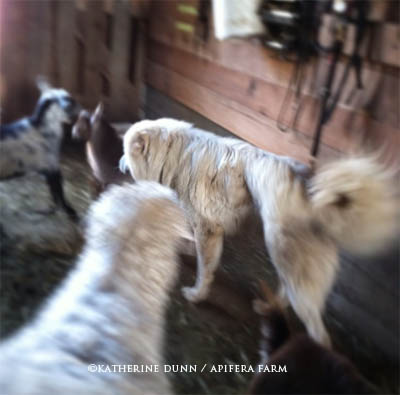 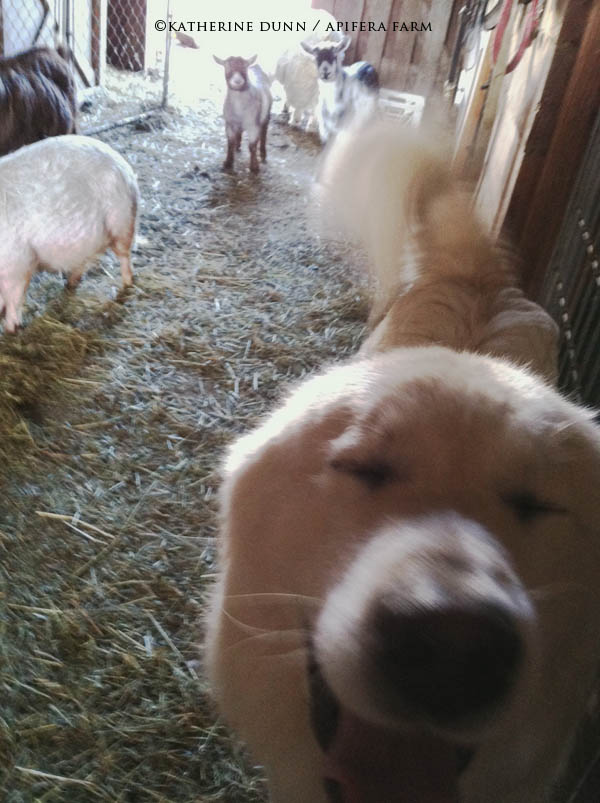 Posted by Katherine Dunn/Apifera Farm at 11:17 AM

They look like they are in love with each other already!

Oh! Oh! The pictures you managed to get, and the way she looks at him. Yes. It IS magic. You can see it right there in living colour. Now I am convinced.

Look at that smile!

Love these photos and that the white dog is still around!

I love White Dog is still here too. And to the smarty pants who wonder if 'I'm feeding him anything". Yes, of course. To the person who thinks I'm not doing enough to find his owner, I am, and I certainly don't have to detail what that is to a total stranger who lives 1000 miles away. People have no boundaries and they sure become experts at anything-even guard dogs when they've never stepped foot on a farm!

Today he and Marcella spent a lot of time with the sheep field and are doing great. they just seem natural together, and I swear she matured overnight. She does still come to me and seems to want one-on-one too so is getting that.

How can you tell that he's a Maremmas and not a Great Pyrenees? Is it the accent?

I thought he might have GP in him, becasue of his head. But I showed the images from the week to this person I highly regard who has had many guard dogs and also works with wolves. He seems confidant he's all M. And the more you see him move and act, he seems much more M.

Having said that, please don't everyone jump on the 'expert' wagon and tell me their opinion!

So sad to here there will be no puppies but you are right that is not the responsible adult thing to do but SO HAPPY that your family now INCLUDES him for real,,,,he is a very lucky Magic White Dog!

Dear Katherine, I have no opinion. I am an expert on nothing. However, they are really really cute! That's what I got for ya.

Debbie-oh the visual of pups crosed my mind, believe me....fortunately I take care of enough cute youngins that I know they eat a lot, demand needs and then grow up! LOL. Suzen, that made me laugh, thank you!

They are adorable - I thought she was already spayed - you must have postponed it...

Susan, thanks for stopping in. I am NOT one to have unalltered dogs or cats or anything. When i took her in at 6 months, the vet suggested we wait until after her first heat. I had never heard this and expressed concern-but I guess it has something to do with not getting infections as readily. So, that is why she is still unfixed and she had a heat in October. So I just hadn't done it due to all the goings on about the farm, piglets, Floyd etc. SO now I really have a reason to get in there, appointment in a week.