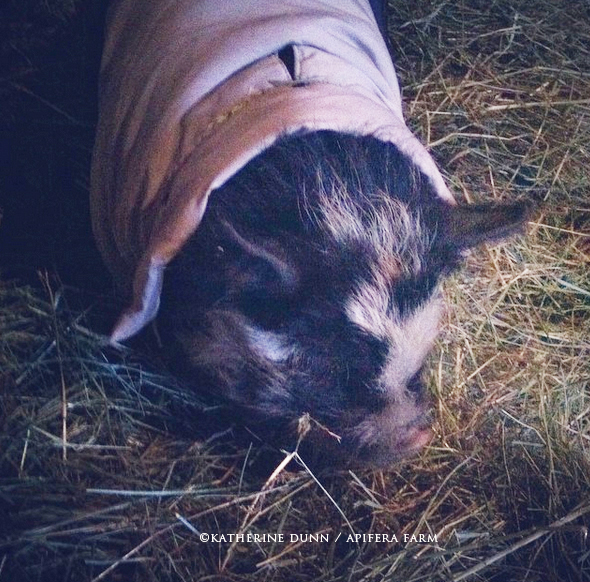 Yesterday morning at feedings, Cornelia did not run out with the other piglets to greet me. As they all clamored around my feet while I carried their feed into their hut, there was Cornelia somewhat listless, breathing rather heavily. She did not eat. I thought it might be a temporary stomach issue, and let it go, but went out early to do do night feedings so I could check on her. So glad I did. She was the same, and I decided to carry her up the goat barn so I could put her in a warmer area- the Old Man Guinnias suite to be exact where so many have gone to heal...or pass on. The fact she let me carry up their without to much squealing showed how poorly she felt.

It was 2:30. She had no temperature but her breathing was heavy. She was a bit weak, and I gave her a shot of meds for inflamation and pain, and called the vet. I knew we would probably want to get a shot of the 'super pig punch' as we call it-a shot that covers a wide spectrum of pig problems, including pneumonia and other bronchial issues {I don't give out names of drugs online, as it is important that people learn these things from their own vets]. When Earnest went ill, he just lay don and didn't get up, but did not have the breathing issue, and he had a very high fever, so this was a bit different.

I was able to get Martyn to stop at the vet's on the way home so I could get the shot into her that evening. I found a dog coat that fit her well, held her awhile in the dark, and covered her up with hay and left for the night. There was little else to do.

Last night I awoke many times. I usually sleep like a rock but lately with all that is going on here, I have been waking up at 3 am and not falling back to sleep. But each time I did, I simply said her name over and over in my head. I dreaded going out to the barn. I am still somewhat new to pigs so when one gets sick I have a bit more of a dreaded feeling than with my goats and sheep. They react differently to illness.

So I headed to the barn, and the first thing I did was look into her stall. I saw her hay mound, and a head. She was perfectly still.

Up she popped, much more lively than last night. I went in and gave her a shot, and took her temp which was slightly higher than the night before but normal. She was much more herself, squealing a bit when I took her temp. When I went to feed everyone, she was very vocal, another good sign, and...she ate.

She is not out of the woods yet, and her breathing is still a bit labored. The super shot she got yesterday lasts for 10 days, so we will hope for a full recovery. All the other pigs seem okay, but I'll be watching them like a hawk. This morning I spent time with her and sang to her and massaged her. She seemed to really enjoy it. I told her the sky, although grey this morning, lit up for me when I saw she made it through the night. I covered her little chunk body in hay, and left her to sleep for the day.

I'm really fond of Cornelia and as you know if you follow along, I have decided to keep her out of the litter. I just love her chunky body and she will simply be a little pet. I hope to bring her on therapy visits, she seems to have a good personality for it and I've been working on holding her. When she got sick, I thought,

"No, why her? Why the one I have chosen to befriend? What are you telling me, Universe?"

I think one thing I've learned in life, as much as I want an answer for everything, there isn't always a reason why one animal or person gets sick. There isn't. That is one of the many challenges of life-we must often suffer, without reprieve, or answers. We must live through such uphill climbs, and look for the blue sky. I imagine when I lay my head down for the last time, while I'll be leaving the party and must say goodbye, there also will be relief in my final breath. 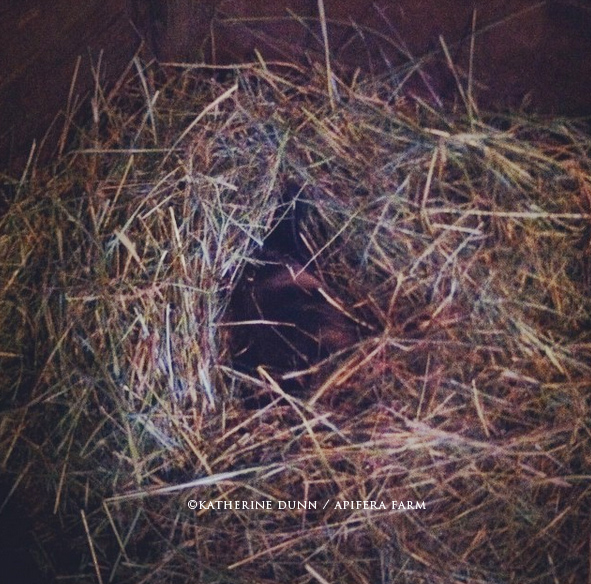 Email ThisBlogThis!Share to TwitterShare to FacebookShare to Pinterest
Labels: Cornelia the pig, Life on the farm

Oh sending wishes for full recovery to Cornelia. So hard to live with it when we don't know what's what. You've had alot of rain this year right, maybe it's the dampness. We are weird warm here still, and all next week in the 50's. xox