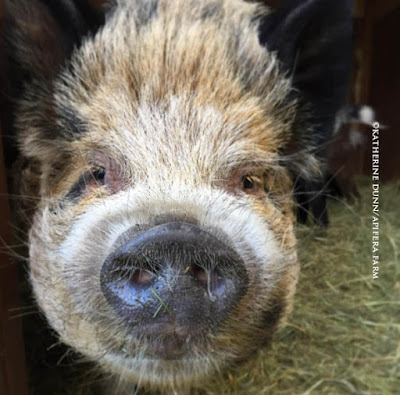 It's the feeling every farmer knows. You walk into the barn and something just doesn't seem right.

Such was the case a few days ago when I went to do my usual rounds of morning feedings. I always feed Eleanor and her piglets, and Cornelia her daughter, and Scooby Keith and Sir Tripod goat first. There was more than the usual pig banter that morning.

"I'm going as fast as I can," I told them from the feed room.

More banter. Then squeals. Lots of them. Too many.

Oh no, I thought.

I looked over the five foot high stall door and there he was, sitting, politely waiting for breakfast while his sons, daughter and lover were scampering around trying to get the best feeding position. But Earnest with his size and fangs knows he can just sit politely, not budging. Doesn't matter if a 60 pounder crashed into him, or even 150# Eleanor, he's secure in his position.

And he had not broken out of his adjoining paddock on his own–he had an accomplice, his right hand gal, Marcella. I can't blame her for coming along, it is her job to take care of her charges.

May as well let them eat there, I thought.

After feedings I escorted them  back to their neighboring paddock. I then proceeded to re-secure what I thought was a Fort Knox fence that separates the ladies form the man. As I moved a pallet up against the fence, tying it with hay twine-a temporary situation until I could move more boulders in-Earnest came and watched my progress. He sat down [pigs sit like dogs] and he looked at me so, well... earnestly, which is why I called him Earnest in the first place.

"Earnest, we weren't supposed to have piglets this spring," I told him.

But we most likely will. And even though I have reasons I did not plan on piglets this spring, i have to say, the though of having piglets this spring makes me...giddy. I've noted on my calendar the two escapades he has had with Eleanor, and now Cornelia and I am unsure if either were in heat. So the countdown begins...three months, three weeks and three days [pig gestation]. At least it will be March and not the dead of winter.

I suppose this makes me look like a crappy farmer. Yea, sometimes all farmers are crappy at their jobs. We did our best with securing fencing when we arrived. There was no fencing so we had to do in one month what probably took us years in Oregon. But now there is a boulder wall there. So hopefully that will do the job.

I got up to leave and patted Earnest on the head.

"I'm glad you got to have some sex, Earnest, and be with the girls."

He followed me to the stall door, and watched me, earnestly, as I left. 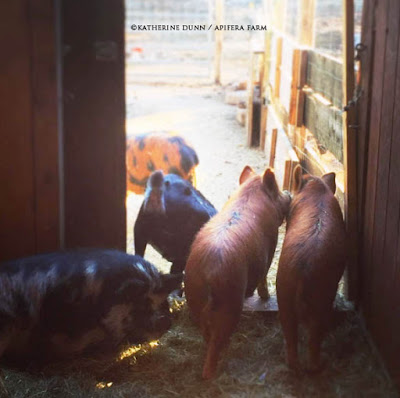 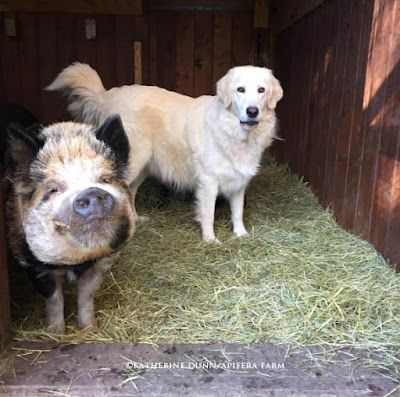