Scooby Keith flies off to live with Aldo 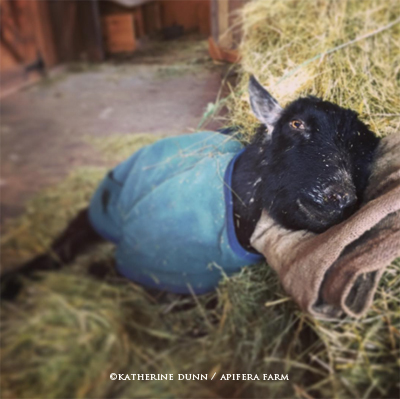 I knew last night he was not well. I opted to let him sleep in the chicken coop, away from the pigs who can often be so happy to snort out grain on the floor they inadvertently run over old men. When I left him he was alert and standing, but clearly not well. But Scooby and I have been through this so many times together. In fact, on his arrival, he was sick and that first winter I thought I was losing him several times, but we always pulled through together. I had a medication regime I did with him, with my vet's approval, and he was just such a little stoic fighter. Those first couple years, it seemed each winter he'd get some kind of pneumonia like symptoms, but this last year, even though we were in Maine, he didn't have a sign of it all winter. Even last night his symptoms were not that he was sick, they were that he was checking out.

I almost hated to get up. Arriving at the barn, he had made his way to the coop door, and was in an awkward position, but was still strong enough to bleat out to me.

I know this goat, and his language. I know when his bleats me, "I'm ready to eat" versus "Put more in my dish"; I know when he is content to be in the pig paddock for the day, or when he would rather be by himself out in the orchard yard. I know his "Hello," versus his, "Hey, I'm over here, come get me". And this morning, I knew his bleat meant,

I got him out and he couldn't stand, his head wobbled and he could not right it. I lay him down on hay and got him comfortable, covered him in more blankets and assessed him as the background of pigs, goat and near by donkeys all let me know that breakfast was late. I have done this so many times and I knew he was not coming out of this one, and that he was already in what the vet taught me is 'the death spiral'.

He was not panicked, but I knew what a survivor he was and hoped he didn't try to fight. I did my chores and came back, he seemed pretty near death, but he bleated out a strong bleat, without raising his head. His eyes were losing their feel to my touch, his mouth was getting cold. I opted to take him into the Cat Cottage for warmth even though he was well blanketed. I sat with him for a good half hour and I kept telling him,

You see, and some might remember, Aldo was a very old llama I took on. He was at the end of his life and his old mate had died. I adopted him from Sanctuary One, but Aldo came with his own sidekick, and that was Scooby Keith. Scooby just really liked Aldo, and on arrival, I tried various arrangements for Aldo and Scooby, so that Scooby could have a goat friend, but Scooby just didn't resonate with the goats. He liked Aldo. Then Aldo died one summer, a real blow to all of us. Scooby carried on, but I decided to move him to an upper barn, where he preferred to hang out with Boone. He slept in the hay barn at times but during the day, he ate with Boone. I guess he liked bigger animals.

So, today, I told Scooby to look for Aldo. It gives me comfort thinking of Aldo, somewhere, in some form be it large, white clouds calling out to his old friend. I sang my go-to song for the dying, "Over the Rainbow" with appropriate words for the hospice patient. I hope someone sings that to me on my big day.

Saying good-bye to Scooby has many other layers of grief for me, of course. I guess each death, in its own way, causes us to snip strings we might not be ready to snip, or are ready to snip, but are taken off guard how much their dissolving stings and resonates. Scooby's death is like all the deaths of the old farm rolled into one somehow. He is the last true elderly-elder goat that came from Oregon-Sophie is 11, Tripod is severely crippled and about 6, The Head Troll is 15+, and Wilbur-Moose-Goose are youngsters by comparison. So, Scooby Keith's death is loaded with reasons to cry today. And I did.

But mainly I told him how fabulous a sideman he was for me, how much I loved hearing his distinctive foot steps coming into the feed room each morning, where he ate by himself, away from the clamour of pigs, dogs, chickens and other Misfits. If it was warm and dry, out he'd go to eat leaves, on his own, content.

But mainly, I told him to look for Aldo.

I was cold and needed a warm me up coffee, so left him for a break. I knew he'd be gone by day's end or sooner. I had done all I could do for him, and he wasn't fighting it, he wasn't in distress. He was close to 17 and was...old. I left to get some coffee and my last words were,

"It's a beautiful day for this once in a life journey. Look for Aldo."

On my return, he was gone. And that instant, I missed him already.

{See all the past stories and photos of Scooby Keith.}


A video posted by Katherine Dunn / Apifera Farm (@katherinedunnapiferafarm) on Feb 6, 2017 at 9:01am PST

Ah Scooby, it was your day. We are sad that your adventure among us has come to an end, but my goodness, what beautiful wings you have to take you into your next adventure. Fly on.

You are a very good escort for flying over the rainbow. Thank you for singing to him. If only it was that beautiful for all of us.... but who knows. It may be.

Farewell and godspeed, handsome little man. We shall never, never forget you.

oh, katherine......i love you so much, you and your giant heart.
i, too, hope that someone sings "over the rainbow" to me during my journey. 'til then, i shall sing it to all my beloveds as *they journey.

bless you and apifera farm.

Dear Scooby Keith, I sang my prayers to you today, imagining you with glorious wings traveling up to Aldo. I then wondered how the heck I could get a bottle of wine to wing its way to you Katherine, and to Martyn. (Perhaps I will have to drive one out?) I love that you sing to ease the passage. Such a gift for Scooby, and for all of us. Big Hugs. xo

You have no idea how this has touched me. And your telling. What a beautiful tribute.

I'm so sorry, K. I know how much he meant to you. Run free, sweet little man. xoxo

This sweet little guy got your love until his very end, and that's beautiful.I send you my warmest thoughts.