The snow of yesteryears 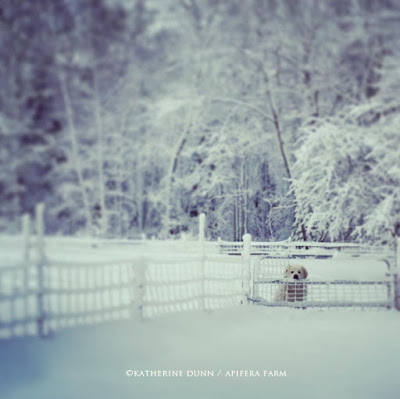 We had another 6 inches of beautiful snow a night ago. I awoke to the entire Wood covered in beautiful white clothing, every wood pile, every poop pile covered delicately in fluffy snow.

It was a night snow, katakana in Eskimo. Night snows are especially joyful I think, because you get up and open the door just as Dorothy did when she landed on Oz, and swoon.

To say White Dog is in his element is an understatement. This dog is so happy here. Not only with the snow, but his new solo job of guarding the small flock, rather than sharing that duty with Marcella.  I can tell he is very content here. I bring him into another paddock a few times a week during the day, depending on where the sheep are, and let him have wolf play with Marcella.

I never tire of seeing him at the gate, and even though I have taken the same photo of him there many times, each snow fall makes it different. The barn roof snow finally slid off, making him his own mountain which he proudly sits on for a perfect view all around his terrain.

As the Eskimos would say: there are ontlas all over {snow covering objects}, dinliltla cover the hind end pantaloons of the White Dogs {little balls of snow on dog fur}, and now quinyaya is appearing {snow covered in animal poop}. And there is the beautiful kriplyana {blue snow} that is so mysterious and makes me imagine an entire universe living under the snow.

Someone asked me if I liked having a wintery winter, versus what I considered sort of a cold spring in Oregon. There is so much I love about this kind of winter, but it is also problematic on a farm, I can not deny that. In a way, I'm glad we got the epic storm we did, where 24" fell in 12 hours on top of the foot we already had, and then another 6" a day later-it showed us what we need to think about next pre-winter, and it showed us what improvements we can make in the barnyards to help with clean out. It is no different than the learning curve we faced our first year in Oregon with floods in our fields. Oregon got fog and ice, we get snow and sun [usually]...winters go on here, I get it, and that was a sobering fact I had to face as i was digging out a small path, again, and again, this past storm.

Here's the thing, I've lived my life with one rule: Live in way, in place that makes you happy; if that changes, you can find another place. I've never left a home because I hated it, I left NYC, Mpls and then my beloved first farm in Oregon because changes had occurred, earthly plates had shifted, I had shifted, Martyn had shifted. I am not afraid to move with changes. I guess the biggest fear I have is getting to a stage I have to go where I don't want to go because of inability to care for myself, or not being able to live with animals.

I try to show my positive thoughts right now about winter. There is so much gloom out there right now for so many. I grew up in snow, so it just isn't an issue. I love that Maine has sunny days-light becomes very important as we age, and I do know that the grey in Oregon was really getting to me-and once you are wet, you never really get warm again. I have had thoughts of spring, it would be spring to me in Oregon, and I loved that tulips pop up there in February and the minute leaves fall in autumn the buds were there. There is never has that will winter ever end feel in Oregon [to me, a Midwesterner].

But it's beautiful. It's so beautiful. The Eskimos have a word for "the idea of snow, penstla. I was excited for snow when we were moving here, and I could feel the same excitement of the first snow here that I felt as a kid in Minnesota, my family all there, the idea of sledding on my mind or skating. Snow was a gift! Digging tunnels in the barnyard reminded me of the ice -snow forts we'd make, and the quiet they gave us when we crawled inside.

The snow of yesteryears, nylaipin, is still in my heart. The rains of Oregon never did that.


Posted by Katherine Dunn/Apifera Farm at 9:29 AM