Up to our hipbones 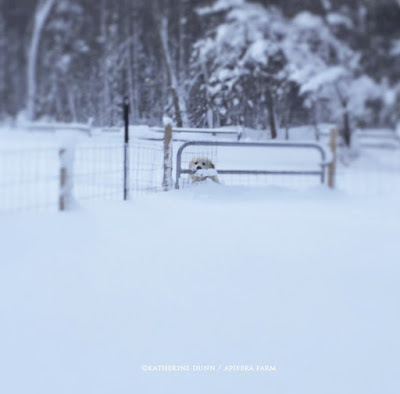 The animals take it all in stride. This morning I awoke to the Little Apiferians singing their bird songs in the living room, and I could see the sun reflecting all over, bouncing off the frosty windows created by Monday's nor'easter. It was a relief to see the sun.

It's beautiful out, pure virginal snow without a track on it. Just gorgeous. One can't be awed by the sight, no matter what trouble it brings. We were able to really get a good look at how much we had, and we estimate at least 24" or more, and then the 12" we already had. but I still think we have more, since it is almost up to the top of some 4' fence lines.

I arrived at the barn and opening the stall door was like a goat and pig version of Wizard of Oz. Marcella leapt out into it with out a care. I created a small patio for Earnest and the goats, and cleared a pig tunnel so the pigs could walk out and I could get to the barn. Then set out to task two, at the new barn. I was greeted by the avalanche of snowing coming off the barn roof, missing me but creating even more snow on top of the other snow. I started creating a pathway there after I fed everyone, and I had this moment-a moment, mind you-of remembering a time in Minnesota when I lived alone in a small house and shoveled the drive and then the plow came by and it was a mountain in the exit way, and I just kind of stopped, and cried a little. I remembered how this much snow and having to clear it can create that feeling of hopelessness.

So I just thought, it always melts.

I decided to tackle the donkey and horse area. I was concerned because they have a large 20' interior that is a 24 hour turnout, but right now there is no paddock for them, it is 4 feet deep in snow. I could see someone had attempted to walk out, but turned around after a couple feet. It's soft snow which is good. The roofline back there had not melted off yet and there is another huge amount that is about to come down on the already growing mountain that is beginning to infringe on the interior stall area. So I started digging. I gave up after 30 minutes. I gathered Martyn to come out and assess our next step, since he'd been plowing the drives most of the morning. We need to plow the roads to the barn and already had a lot of it done before the 24". Martyn started on the drives, because we might get another 12" tomorrow night...insert a swoon from barnyard...and I set out to create a mini sized area that gave the equines more space to walk around in the snow area, and create a bare spot for the roof snow to land.

About every 5 minutes, Matilda wandered out on the path I was creating for her pleasure, looked at me as if to say,

"Aren't you going to make it big enough so I can get to he back field I like?"

On her third visit to me, I admitted to her,

"You probably aren't going to see that field for a long time, my friend."

She flattened her ears in airplane style, and returned to her hay.

I called back to her,

But nobody ever listens to me. 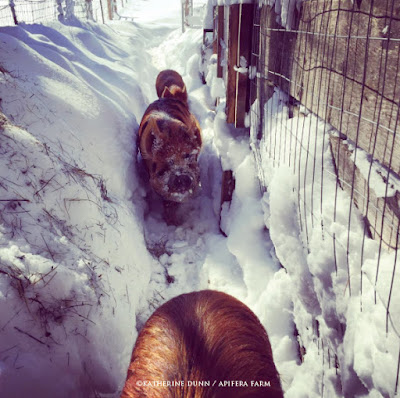 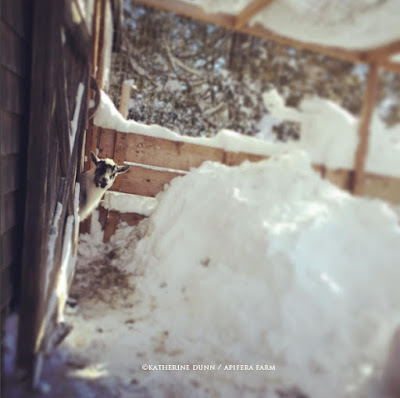 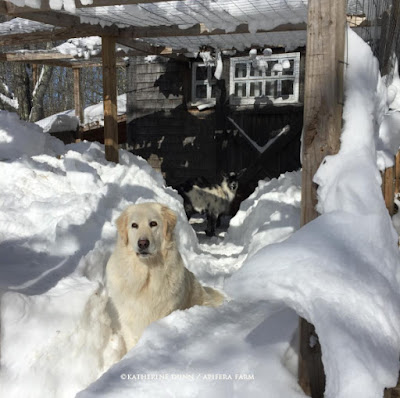 So glad you all are okay! It looks lovely and overwhelming :) I remember one storm here where my husband and I were out shoveling the driveway as the snow was too deep for our wimpy snowblower. We were out there for over an hour and red faced, icy and gooey. Our neighbor emerged - he a retired gentleman of some means which translated into State-of-the-art Monster snowblower and in minutes had his driveway cleared and zoomed back into his garage. I stood on our not yet cleared driveway and tried not to cry! I can only imagine if I had Donkey or pig urging me on ...

Oh, it will be SO GREEN come Spring (well, after the mud, right?) xo