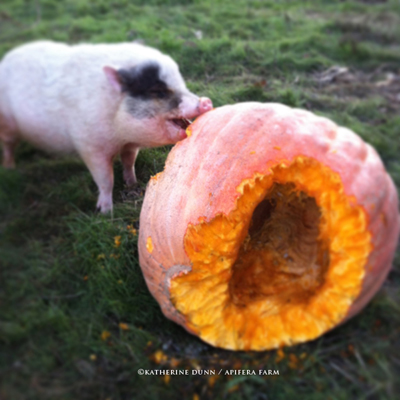 Tomorrow is Rosie's ninth birthday. If you had told me way back when I first brought Rosie home that a] she'd live this long, and b] I was going to drive her across the country from Oregon to Maine at some point, well, I might have pig snorted.

When we first arrived in May of last year, Rosie continued to live in the truck bed in her private wooden hut, and for about two weeks wherever we went–to the hardware store, or out to lunch–people would be curious what they heard in that truck bed.

So tomorrow, it is her ninth birthday. And it is also our first sheep sheering! I hope my sheering helpers will sing along to her...hopefully she will partake for seconds in a muted grumpy fashion-but why expect that from her.

{Do you like the stories of Apifera? Consider a small donation to help offset the adopted animal care}
Posted by Katherine Dunn/Apifera Farm at 8:40 AM

Email ThisBlogThis!Share to TwitterShare to FacebookShare to Pinterest
Labels: Misfit Updates, Rosie the pig, The World's Grumpiest But I Am Fine As I Am Pig

That pig found just the right people to live with, grumpy as she is.

I just read this out loud to my family ... we ALL love Rosie and how she beautifully models being true to oneself. Happy Birthday Rosie! Katherine, you are racking up the karma points for sure :) xo