Tomorrow is my birthday. I've told the story of my birth many times, so won't share the long version. But the day I was born, my father's mother died, and it is how I got her name, Katherine. My mother also shared the family story over and over as I grew up-the part of the story that she herself almost bled to death birthing me. She wondered why I never had children [I never had children for many reasons, but I can say I could never watch human birth scenes in movies, still don't].

So it dawned on me as I was lying in bed thinking about my birthday that it makes perfect sense my birthday is entwined with death somehow. Back out West at the old farm, Martyn and I always seemed to encounter death during our two week birthday celebration–it was lambing season so something was always happening. Last year, we were in the thick of trying to save Birdie. I don't mean to sound glib, but it just seems death comes at my birthday.

So this morning when I fed the chickens, there she was, my smallest and sweet little The Golden Child, sitting up on a perch, dead. She had rested her head upwards, leaning into the wall, so her stiff body was like a beautiful little statue when I found her. Chosen One came along in a magical way. We had adopted a Bantie rooster, a Seabright and they are about 1#, very small. My hens are normal sized. I had a Buff Orpington that went broody on me [this means she was sitting on eggs to get them to hatch] and had a secret spot for a while. By the time I discovered it, I let her continue to set. And one day, I heard a tiny sound, and under the hen was this sweet little chick. I named it The Golden Child, and hoped it would be a hen, and it was.

She was of course much smaller than the hens, and while the broody hen protected her until she grew up, in time, she was always sort of on her own in the flock, and she liked to perch away from them. They weren't mean, but I always felt for her.

But she was one of the best layers, and her egg was about 1/3 of the size of other eggs. It was such an intimate gift to see her little egg nestled amongst the larger eggs. They were bite size, and Martyn liked to pickle them. I ate the last one today and I will miss her little eggs.

I was sad to find her dead. She was only two. Who knows what takes a chicken. As an old farmer told me years ago when we first got hens, "Sometimes they just die." And it is true.

So there, I've had my death now for my birthday. And we can move on again. And, let's not forget it is also Moose's birthday tomorrow and there was a time two weeks ago I wasn't sure if he'd be with us to celebrate, so I'm grateful for that. He is a different goat than before the polio struck, still blind, and just not quite the old Moose, but he's eating, and getting outside, so I'm happy about that. I hope he can live on now without it happening again.

I was thinking too that I'm basically on the last quarter of my life, if I live to 80. That's okay with me. I don't really want to live longer than that. When you read a really long book, and you really are enjoying it, relishing it...and you get to a point where you are coming to the end, and then, you finsih the last page–you don't mourn it, you just think what a great read it was. I think of life like that I guess. 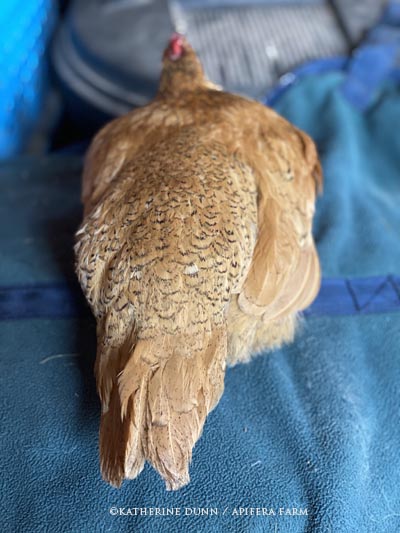 Posted by Katherine Dunn/Apifera Farm at 7:55 AM