I'm pretty excited about this 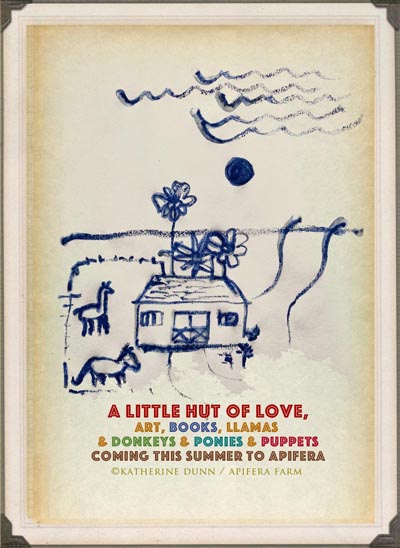 Awhile ago I mentioned on our Apifera page online that I was looking into resurrecting the Misfit Book Mobile idea-something to drive around in with an animal or two, and sell my books. It is a sweet idea but we talked about it over the coming days and decided it was not a functional idea, and the mobile was going to cost at least $7000+ and then it would have to maintained. It's already hard enough to get the trailer hooked up and take animals out, it seemed like one more thing to take energy without much of return.

So, I'm going back to my original idea when we first arrived...I put it off because I wanted to settle here first, and I'm glad I did. We are going to make a hut in the front garden area, accessible from the road, so people can stop and buy books, and meet an animal or two that I will have with me in the hut, or in a paddock by the hut. I want to have a way to sell my books, and even have some art on the wall. It's going to be a simple little shed that I'm having built and then Martyn can make adjustments down the road. Martyn has so many tasks right now–finishing the barn loft before hay season, finishing the new vegetable beds, another hut for the ponies–so I didn't want to overwhelm him. He will have enough to do to help me build the pad and he will also build gardens around it since he wants to. The front yard area/gardens are sort of his project, I stay out of his decisions pretty much, except for my hollyhock bed.

I am NOT raising money for this, it will come out of my funds, not the non profits, even though I see it as an extension to our therapy work. I can see doing a puppet show in it too, something I've been wanting to try somehow, or maybe have private one-on-one animal healing appoitments with someone. Martyn thinks I should dress Opie up in a turban and give him a Magic 8 ball.

So stay tuned. We hope to have it in by May sometime. I have no idea yet about when it will be open or a schedule as I need to think about that.
Posted by Katherine Dunn/Apifera Farm at 10:52 AM

Email ThisBlogThis!Share to TwitterShare to FacebookShare to Pinterest
Labels: The Love Hut