Me and Harry...a surprise relationship...and we want the elders to have emotional healing too 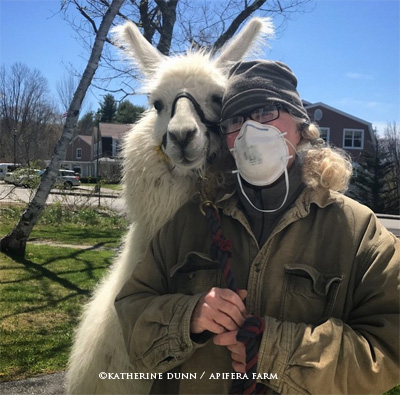 A year ago, we lost our beloved Birdie, a natural healer who had just begun her therapy work with me. I knew I'd never replace her, but set out to bring more llamas to Apifera. First came Arlo the youth and old Luna. Then I was to get a baby girl with her very old mother [I agreed to take on the elder] but the baby died before getting here.

And then, I remembered a beautiful white llama named Harry who I had found in my early searches, but decided to keep looking.

I'm so glad I returned to him and brought him to Apifera. I kind of had a hunch about him and possible therapy work. But I was really focusing on training Arlo. So, it was one of those universal surprises...the universe stepped in and helped me out with my hunch while I was running around finding llamas, Harry was waiting for me.

As Harry got used to Apifera, and me, I took a leap and tried him on a window walk. The first thing I had to do was let go of the idea that he was going to be like Birdie. he is not, and it took him a couple months or more to accept my neck rubs. On his first therapy visit, it was clear from the get go he was pleased, and he listened to my commands, and was calm. He seems to really understand he is there for a reason, something all good therapy animals get. He is on the job but not being forced to do anything he doesn't want to. Opie is the same way, he knows when his halter goes on it's show time. Not every animal, or person, will be like that so when I find one, it's a blessing.

SO Harry and I are bonding. This photo was taken by one of the staff yesterday, she told Harry to smile and he literally leaned into me! So sweet, I like to think it was on purpose.

Yesterday we visited Cove's Edge again. I'm getting more and more impatient with things. So are they. Cooped up, no family visits. I just feel we have got to get testing to a point so these people can have emotional well being as well as safety from the virus. I understand the concern, I really do, and am not criticizing the current lockdown, but what quality of life is it if they can't touch, feel, and sit by loved ones.I don't think I'll be able to resume normal therapy work inside or even in the garden in the coming months, maybe mid summer, but so far it is not going to happen except for window walks, at least at this facility.

We are not allowed in of course, we walk by the windows. Sometimes they have their windows open, it is so hot in there. Yesterday my contact was scolded for allowing the windows to be open with Harry outside, and me in a mask. I thought that was a bit much, but I will do what I'm told.

With the windows shut, I can't hear the residents, and they can't hear me. I can't really see in either, but they can see out which is the most important thing. But I feel our conversations are as important as the seeing Harry. Some of the residents are sharper than others and they want to talk. It makes me very sad I won't be able to have long talks if the windows are shut...but Harry and I will do what we need to do and what is required by the current rules.

So my wonderful contact there suggested we try Facetime with Harry for some of the residents. We tried it and it is not the same, but, it works and we will continue to use Facetime in some situations. We also are going to try Facetime with the other animals here at the farm. I am not that familiar with it but this way Bear, and Opie and the others can beam in to the Cove. I'll keep you posted.
Posted by Katherine Dunn/Apifera Farm at 8:37 AM

Don't discount Facetime because it isn't enough for you. My mom was able to Facetime with my brother for the first time and she was so excited! She said it was like he was there. Thought the technology was amazing.

It really is lovely that you are able to do the window walks. I agree that the rule to have the window closed when you are outside and masked seems rather extreme. I hope that eases up soon. These are such challenging times.