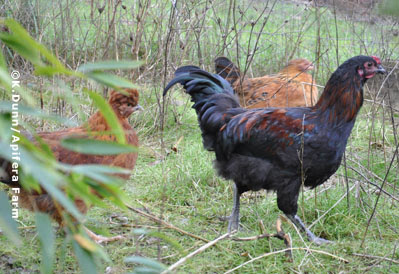 If you follow the blog, you may remember that Apifera was gifted with surprise chicks, born in the hay loft away from the everyday bustle of barn activity. While we suspected secret chicken activities had been taking place, managed by Alice Waters the hen, we were finally let in on the secret after hearing teeny weenie chirps. There tucked under Alice were 6 chicks, most likely born a couple days earlier. And that day coincided with the sad day I released Giacomo the old donkey to the skies above.

Upon seeing the little chicks, so soon after Giacomo's death, I of course felt they were a gift from him, a thank you of sorts. While we didn't need any more chickens, having brand new life to care for was healing in many ways. And I immediately noticed one chick stood out, his blackness reminded me of the old donkey I'd just said goodbye too. I always suspected Giacomo was in that chick, temporarily, just to make sure I'd be okay. So that one black chick, well, I've been watching him and was sure he'd turn out to be a rooster.

For awhile, I thought we might have 4 roosters and 2 hens. But after we lost the two small, rather sickly chicks, the four remaining grew and grew, and one day I heard an odd crowing. And sure enough, it was that black chick, practicing his new voice. While Martyn and I referred to the young clutch as Giacomo's Chicks, I named that black rooster Chicken Jack.

Chicken Jack appears to be the only rooster of the four, which relieves the Dirt Farmer immensely. I look forward to seeing him fill out in the next couple years, as it takes a rooster time to get his complete "I'm a rooster and what do you think about that" appearance. I also love the redhead, shown here, who needs a proper name soon. 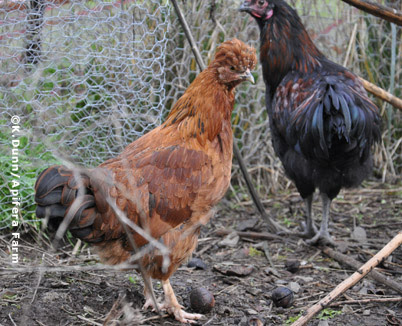 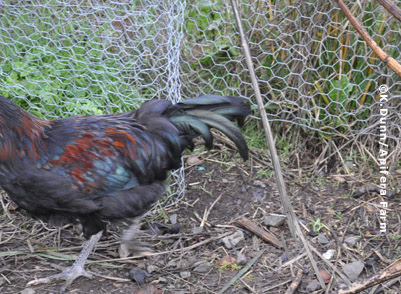 chicken jack has the best name for a chicken i have ever heard of...maybe because my youngest son is jack but you have to admit, that is one good looking chicken with a great name...i see many fine mornings awakened by his crowing in your future....

those are beautiful chickens!

Hi Katherine , I just got your book in the mail from Amazon and love it !!

I can't wait to get your book in the mail! How about Rufus? It is the latin name for red and is often used in the descriptives of birds.

Julie- I hope you like it o rare inspired in some way by it!Melly, well I'll ad it to the list!