Ruthie rings in the new year and....

Well, the new year is upon us again. Just like a circle we start and walk around and start again, just like the earth revolving. I usually take the week between Christmas and New Year's Day to reflect, plan, ponder, evaluate...and do taxes. This year that was a bit off due to the kitchen remodel and of course, because of being present as much as possible with White Dog in the final days.

I'm okay. I'm just really sad, deeply wounded sad. Each little thing I feel and see as I go about my day has lessons about my open wound, or provides a soothing band aid too.

So for now, I'm doing as White Dog suggested, when I miss him I turn to see him everywhere in Nature, and I take solace in the energy of all the creatures still here. I have felt him many times. I walk over the grave since it is there in my chores, and I talk to him a bit, or say a greeting like I always did. I still crave to take photos of him and will mourn that too. But I took so many and I am so glad.

I don't know about this new year. I think we are still in for pandemic issues. I am not allowed to go into Coves with my animals right now. I have to come up with ideas. I will. I want to do more with hospice patients one on one. I want to work more with the blind.

I want White Dog back.

I hope you have good health in the new year because without it things get complicated fast. Thank you to everyone who supports Apifera financially and emotionally, and thank you to those who follow along and also buy my art and books. I have a good life and there is not a day I don't think about that.I have Martyn and my art and my farm. I don't take it for granted.

Being spiritual being having a human experience is conflicting-often. No matter what your belief system, we are here in human bodies and we are meant to be in those bodies to learn....and grow. It's the human being of me that is grieved by the absence of a loved one, but it is always the spiritual creature I am that helps me walk through it.

Posted by Katherine Dunn/Apifera Farm at 1:51 PM No comments:

Email ThisBlogThis!Share to TwitterShare to FacebookShare to Pinterest
Labels: RGB aka Ruthie the turkey, Wisdom 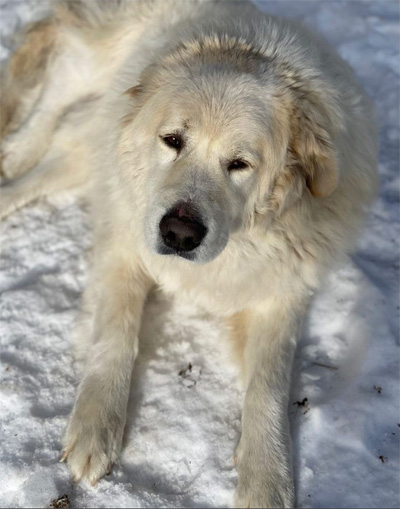 I am just in deep grief right now. If you follow along on social media you know yesterday we put down White Dog. We will bury him today. I just can't write more about it right now. It's like an entire part of the fields and barnyard are gone. I do believe he is Here There Everywhere like all the other creatures and people who have left the Mother Ship. But as a human left behind, I am faced with deep loss of HIM.

The grief is physical.

Posted by Katherine Dunn/Apifera Farm at 8:24 AM 6 comments: 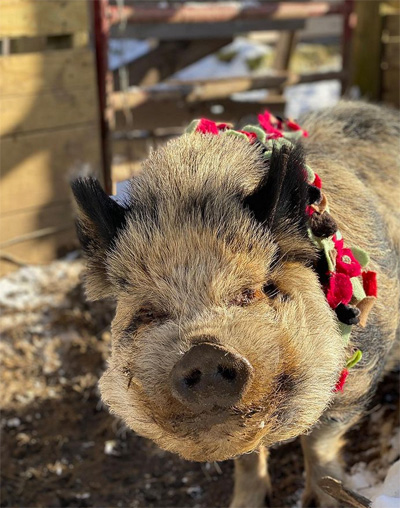 Years ago, a follower sent me a hand made felted garland. I had some fun with it and shared it in photos, with the animals taking turns to wear it. It became an annual Christmas tradition and is great fun for everyone, including my followers. That garland has been sewn together so many times! It has been dragged through the mud and pig mire and poop, but still keeps on giving love back to us.

I have been posting daily pictures all week of the Garland Festival over on Instagram.

I have been preoccupied with the kitchen remodel [also posted on IG]. I have never had a harder painting job in all the six houses I've remodeled. We ripped out two layers of ceiling to expose the original hand hewn 1760 beams. I'm finally getting about 2/3 done with just the ceiling. It is going to be so nice. Martyn is doing the counter tops over, and I will be painting the cupboards too. We're going to an alabaster white-pure, clean, fresh.

Posted by Katherine Dunn/Apifera Farm at 1:50 PM No comments:

We get our snow and the ponies run in their bells

If you follow on social media you know we have wanted snow, not only for White Dog, but so we can run the ponies. It was a pretty, fluffy blanket, perfect for Captain Sparkles tender feet and he and The Teapot are just pure joy to watch.

The joy is good for us, as we are journeying through White Dog's bone cancer. I write about it extensively on IG and FB so follow the journey there. I can't take enough photos of him. The main thing is I was focusing too much on the physical signs, and thanks to a dear soul sister I realized I was not letting him set the pace for what is to him, a spirit journey. He trusts me, and I must trust him, in our language and communication with one another. I must trust my senses so I can do right by him when the time does come. And that time is not today. One day at a time.

A friend sent me this qoute and it is so spot on with the feelings right now with White Dog. I know tohers who are also facing this in between time with loved ones. It is uncomfortable.

"It's hard to be there, that space between what no longer is and what is yet to be..."

Posted by Katherine Dunn/Apifera Farm at 9:30 AM No comments:

"There are heros in the seaweed", said Leonard 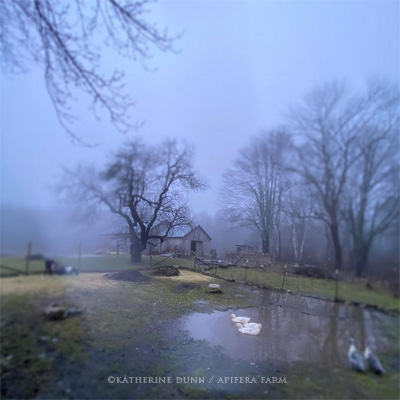 “Look among the garbage and the flowers, there are heroes in the seaweed...” {L. Cohen}

We have had such warm days, and rain. While I want snow [which supposedly will arrive tomorrow] I have to say the warm weather makes chores easier. And, well, the fowl are extremely happy with their overflowing ponds. I love to look out on the front barn goat paddock at chores and see this scene. To me it is so peaceful. One woman said it looked like one of my paintings and I guess you can say this–they do merge, art and life.

One can see messy mud and mire and leafless trees...or one can revel in the sculpture of the branches and the reflections in earth toned water.

Posted by Katherine Dunn/Apifera Farm at 11:43 AM No comments:

The animals and I pay tribute to Polly, who has given us snowflakes 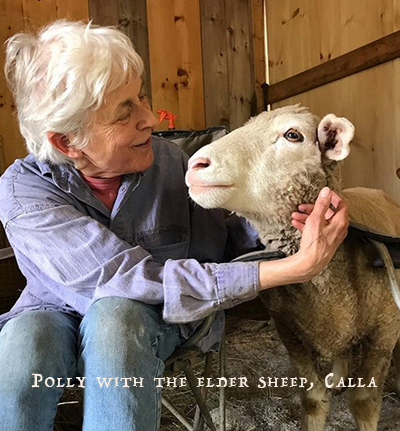 It was Pickles the goat, running in joy as I came out for the morning feedings.

I was taken aback. I had just found out myself in a morning email that our loyal volunteer, Polly, had died the night before. She had stage four lung cancer.

I stood silently, the snowflakes falling all around me, as the goats gathered at my feet. I looked at the sky and thought to myself, it is something Polly would do.

“Mrs. Dunn, Polly said she sent the snow so you can put the Christmas bells on the ponies and let them run around in the snow,” Pickles said.

I have been asking for snow, I thought.

Earnest the pig sauntered up to us.

“She was kind. She put her arms around me,” said the quiet voice of the very old sheep, Calla.

“Remember when I got to pull her around the barnyard? That was so fun!” said Ollie, the biggest of the goats.

Ollie was referring to a visit here at the farm when some of our elder friends came to be with the animals, and Polly was there to help. I handed her a lead rope, which was attached to Ollie the goat, and told her she was in charge of him. Polly was a petite person, Ollie is about 120 pounds. As I went about helping the elder people, I looked around and there was Ollie pulling Polly around the orchard, showing her every blade of grass and all the apple trees he loved. But Polly had a smile on her face the entire time.

The snow continued to fall.

“Polly is free now,” said Auntie Bea, one of the old goats.

“What does that mean?” said little Hannah the goat.

“She is without a body,” said Auntie Bea, stoically.

“She lost her whole body?!” Hannah cried, and Pickles gasped.

“You don’t need your body forever, Hanna. You just need it here on Earth. But remember how you learned about Here There Everywhere? That is where Polly is and she needs no body for that,” said Earnest the pig.

“Polly is free of pain, Hannah. Her body hurt,” I said.

“Polly doesn’t hurt? This is excellent news then!” said Pickles the goat.

Pickles took Hannah and they ran around in circles in the fluffy dusting on the ground.

I headed to the outer barn to feed the horses and ponies. Harry the llama came over to me, his white fur dusted in flakes. Polly often helped me when we took Harry to visit our elder friends at Cove’s Edge.

I watched White Dog roll in the snow. White Dog got his snow, I thought.

I put the Christmas bells on the ponies, and off they ran in the snow, bells jingling. It was pure joy.

{A video of the ponies running with their bells will be on Instagram later this evening.} 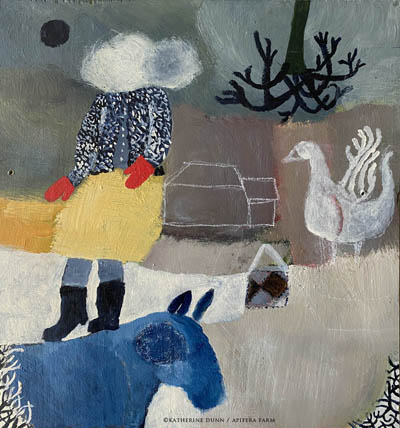 I had a nice day in the studio and was pleased with this new piece. It is now on the shop. It is called "Tomorrows Were Once Todays"

Visit the shop to learn more about this piece >

Posted by Katherine Dunn/Apifera Farm at 5:41 AM 3 comments: