The Beauty of Monkey Houses

Sunday was a very nice day. It was sunny, chilly, but nothing my new mucks couldn't handle. Our project for the day was to do more work on the new ram and goat stalls in the old barn.

After morning barn chores, I did smething I haven't allowed myself to do in a long time - I got a huge mug of coffee, I took my chair and sat it near the old barn in the sun where Martyn had already begun to work, I let the goats out to graze near me, and I sat. And sat, and sat and sat. For at least 30 minutes. It was glorious. I always say, there's nothing more satisfying than watching your man work while sipping coffee in the company of goats. And yes, I did eventually work, which I also love to do. 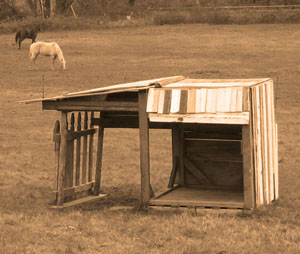 There's something about building 3-D that is so satisfying. The things I build are always works in progress, never planned out - we call them "Monkey Houses". When I was in kindergarten, I built [back when we actually were allowed to use small saws and hammers and such] a monkey house. I was obsessed with getting a monkey, probably because I loved Cheetah on the Tarzan movies. I was sure that if I built one, I would get one. There was no doubt in my mind. I worked very hard on my monkey cage. It was supposed to be a box with wooden slats for the bars. It ended up being about 5 inches deep, obtuse, but it all stuck together some how. I had no concerns that it wasn't exactly the way I had originally envisioned it, I just knew it would work for a monkey. My kindergartnen teacher, who lived in the property above ours back then, told my mother, "Are you planning on buying her a monkey?" and they both laughed when she relayed that each day I would arrive at kindergarten ready to work on my monkey cage, positive my parents would get me one. The cage ended up being a temporary home for a duckling [that my kindergarten teacher gave me, as a matter of fact] and then became a home for a wild bunny baby I found.

I'm so glad I can still feel that - that I get an idea to build something, and I just do it, with no doubts it will be just fine, and lovely and perfect in its own way...We have many of my monkey houses all around the property. Perhaps the biggest and best I've ever done is the small goat shelter I made last spring. It took me days...It looks pretty bad, but the goats just love it, they run through and around it, and it does protect them from sun and rain, just as I intended. "They who dream by day are cognizant of many things which escape those who dream only by night."...Edgar Allen Poe said that.

Fortunately, Martyn is a skilled craftsman/handyman/jack of all trades. I think we are a good team that way - he makes sure the thing's standing, I add the ambiance.
Posted by Katherine Dunn/Apifera Farm at 10:21 AM

What a lovely story! Reminds me of a geese home, Michael and me made on a holiday in Andalusia a few years ago. We rented a house and the owners had locked up a geese family, in a tiny "house" they had made out of bricks, all closed, no way out. It was just cruel for us to watch this, so we decided it was time to free the geese and made a nice outdoor areal for them with things we found. Every time they saw us they flattered excited, knowing we would fill the little pool we made for them with fresh water. It was so wonderful and we often think back of these geese and wonder if they were locked up again after our leaving.

I love this story! And I love the carport or whatever the appendage is on the side. Because, of course, a monkey can drive a wee little car, right? Oh, and give that man of yours a big smooch, too! My husband cannot fix anything, much less find something in the freezer. What a blessing to have someone who can DO things!! With love, Suzen

When I was a teenager I created a primitive little rail edging for my first-ever herb garden. Dad called it my "elephant fence" all summer.

Lynda- I love that! Thanks for sharing, what a sweet memory.....

I wanted a monkey too!!!!! but daktari was my favorite show...remember that one? what a great story!