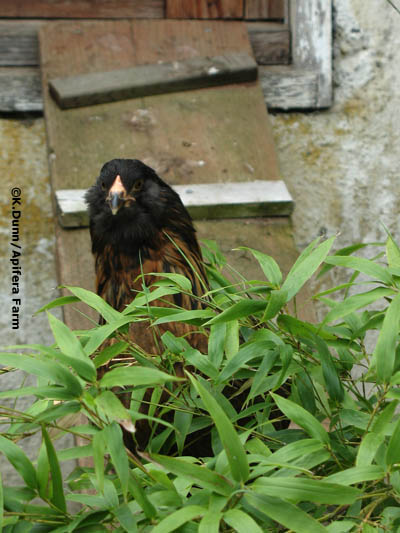 I struggled to find the proper name for her. Her black mop reminded me of a wig, something that Liza would wear in a Vegas show. But she is more dignified than that, quieter, but very secure in her place in the flock. She is one of the first three hens out in the morning, and hangs out in the Jane-Golda group [who you will meet later this month.]

I called her Eliza for a few days, sort of like Liza, but more reverential. Thought of Tina Turner, but, no, just not right. Ella, Lena, Pearl...the name and face that kept returning was one of the Three Stooges, Mo - you know, the one with the black mop haircut.

Geeze, I can't name her after a Stooge. So I set out to create a name around the name Mo. As flock caretaker, this was my duty to her. And so I came upon Edmonia Lewis, a black woman born in the States in the 1800's who is noted as the first Black woman sculptor. Her story was inspiring in that she recreated her life in a daring way for the times, and she also recreated her name to be Edmonia Lewis, having been given the name Wildfire by her Chippewa mother. She moved to Italy in her early career and became famous and sought after as an artist. I liked that she "...created many of the myths that amazed, tantalized, and generated interest in her work."

So Mo is a myth maker too, as we all are. Joseph Campbell would approve too, I'm sure.
Posted by Katherine Dunn/Apifera Farm at 8:45 AM

I've never seen a chicken who looks more Edmonia. A perfect name for this girl.

She's beautiful! The name suits her.

Simply charming Edmonia, has the perfect name!
My sachets arrived and they are scrumptious !!! Thank you so much!

up at 5 am catching up on your blog! ha... that's a funky sweet new chicken in your flock...i love who she's named after, and i really love the name 'wildfire'...i'm off to read your last 7 posts! xoxo i hope you are well!

Thanks all! Monie is good!

As a former student of Joseph Campbell's who now now writes about Edmonia Lewis I am quite dazzled by this development. Happy times to you and Edmonia - - or should that be Miss Lewis as the 19th-century newspaper had it?
- Marilyn Richardson

Hi Marilyn, you were a student of Josehp C???? I told my mother in law who had classes with him, I would have loved to met him, dined with him, talked to him, been in his class....

I was new to Edmonia. I was amazed by her life.
Do you think she'd be happy to have a hen named after her? Some might consider it a joke. In our family it is an honor. Edmonia now lays an egg a day, and helps feed us. I would love to read your things, and will search for them.