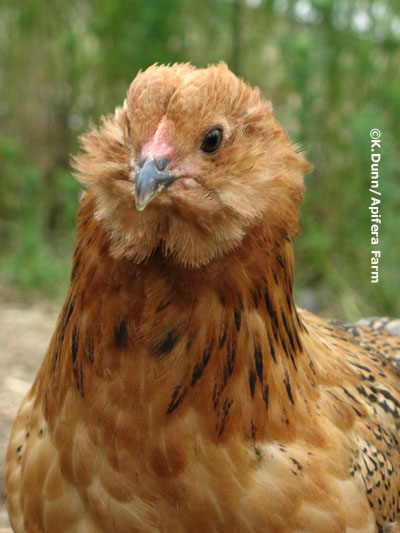 Introducing Mabel Dodge, the chicken, named after Mabel Dodge the woman. I thought a fitting name for this very lively, non conforming hen. She's a bohemian in nature with her Araucanian egg color different than the other girls, and her stunning feathered attire. Mabel the hen is a bit flighty, not one to sit still too long, just like her

name sake. You can read more about Mabel the woman here, and if you are lucky, visit her Taos residence which is now a museum. I was lucky enough to go there years ago. I like flawed women, who create some stir. Wealthy, married a million times, dabbler in certain social sets, she was a sort of a pain in the butt too, but she lived a colorful life.

I almost called her Clara Barton, but in the end, her independent behavior seemed more Mabel Dodge like, than a Civil War nurse. She looks a lot like her Aracauna flock mate who you will meet shortly, and except for the puffy cheeks of Mabel, they are hard to tell alike, but their personalities are different once you spend time with them. Aracuana have beautiful blue-grey legs, and of course lay the green eggs [or blue, and someone also told me pink..].
Posted by Katherine Dunn/Apifera Farm at 10:56 AM

What a great name...I knew exactly where it came from. I was lucky too and spent a week at the Mabel Dodge Luhan House for a week when I attended a Natalie Goldberg worshop.

I lived around the corner from the Mabel Dodge Lujan House in Taos for a time.........beautiful. I think Mabel is a most appropriate name for this gal.

It's something in the eyes. There's definitely a similarity. Mabel Dodge should be proud that you named this hen after her.
So..., will there be a Ansel Adams or a Georgia O'Keeffe in the coop too? I just love it!

Thanks, all. If you can get to the Mabel Dodge house, it's very inspiring.