Aging with a pug 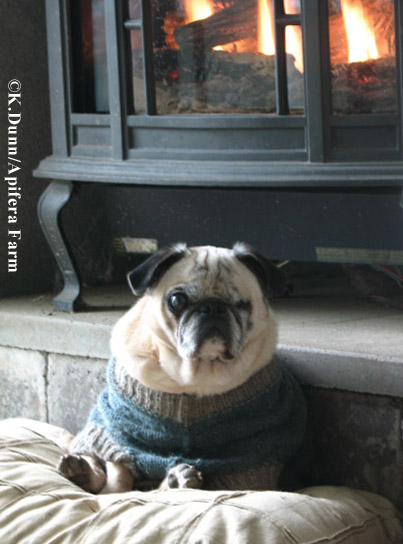 The One Eyed Pug is aging. He is almost 12 years old now, and his world is now seen out of one side of his head, with a gauzy blur to it due to damage from years ago. His crinkled pug nose is full of bits and particles from his morning breakfast and a bit of Apifera dust. His waistline expands with little bumps, assumed benign. And his tail, usually curled like the top of a phony ice cream cone, will straighten out when he is most relaxed, or worried.

Age does not keep him from emitting large quantities of gas, and unfortunately for the person holding him on their lap - uh, that would be me- the gas is often in the most serious form - a silent, liquid squirt we like to call "Wet WIllies". I have taken to putting a towel under him when we recline together on the couch at night. But if I forget, I arrive at my bed, quite stinky, ready for a night of slumber covered in tiny little brown spots.

Billy Baker, Bill, Mr. Wiggle, Pug, Old Boy, Mr.Bill - he comes to any of his names, that is, when the name is shouted. It is yet one other of his birth rights that have slowly been taken from him, his hearing. He often gets stuck at the bottom of the stairs, and he stands with a worried tail uncurled, one eye ball looking so forlorn, all the while doing a little pug whimpering. It is a sad thing, to see him in that state, all confused, not knowing how to get up the stairs.

He sleeps more and more, and often doesn't know I've entered the room. He's beginning to have little accidents, including a bad mishap last week where he asked to be let up in my bed in the early morning. TIt has been our ritual to snuggle in the morning, after he breakfasts outside, he runs back in the bedroom to be with me. I'd let him under the covers where he'd snuggle his pugged up face in my arm pit. We've been doing that since day one. But one recent morning, he seemed confused, and it turned out, he left much more than a Wet WIlly in the bed on my bare farmer body. I deal with manure on a daily basis here on the farm, but when it's freshly deposited on your naked legs at 7am, in clean sheets, it's rather...shocking. I could tell he felt upset, and no apology was needed.

The body ages, muscles and sphincters and all sorts of things get loosey goosey. It will happen to me too, already is happening, and hopefully no one will shame me for it. He gladly followed right behind me tot the washing machine, and cleaned crumbs off the floor while I loaded the soiled sheets. I of course was buck naked - when a dog poops on you what's the point of getting dressed - first things first. So there we stood together, an old one eyed pug with bodily functions failing, and a naked middle aged caretaker with pug poop on her legs.

Billy is a role model I guess, for all of us aging two footers. You get up each day and face it with all your faculties, even if some of them are a bit worn out. You hope there's someone to give you a lift up in the bed, and a warm touch when needed. You just do the best you can do, and handle what comes your way with a few snorts, and don't worry too much about the wet willies you might let slip out on the way.

Email ThisBlogThis!Share to TwitterShare to FacebookShare to Pinterest
Labels: Dogs of Apifera, Old One Eyed Pug

Sing this song, ' all he needs is love'. This was a funny and insightful post on aging. Thank You.

ah, poor pup. but this post made me giggle a little.

Sweet and a little bit sad. I love these stories from Apifera and you.

That was very good to read. Here's to both you and Billy!

the post brought tears to my eyes. I think aging gracefully is very over looked in our 'forever young' society. Our 2 pups are aging, albeit neither have anything 'loosey goosey'... just yet. One is 9 and one is 10....but I'm sure time will surely send them the way of your little old man.

What a sweet and lovely post. I am dealing with a lovable, but oh so difficult kitty who also leaves, um, "bed presents". It was nice to read about your dedication and sense of humor.

What a wonderful portrait of this aging warrior. It reminds me of Jane Brown's portrait of Samuel Beckett (you can google the image).

Hi all, and thanks for sharing thoughts here. Samuel Beckett might be...amused- that portrait of him is so wonderful, and telling.

I so enjoyed reading about Old Boy. We adopted a 10 year old, blind pug last November and have fallen head over heels for the guy.

Such a handsome older gentleman! Really, he's a doll in that sweater.

Oh, were we all to have somebody to take such good care of us, as Katherine takes of the blind pug ... who in the portrait looks a bit like Winston Churchill!

We LOVE BILLY BOO BOO!!! Gas and ALL!

My friend has taken to putting Pampers on her pug to keep the little poops from decorating her whole house! The diapers work like a charm. (sure beats having to get up at 0-dark-30 to wash out your sheets...) T.