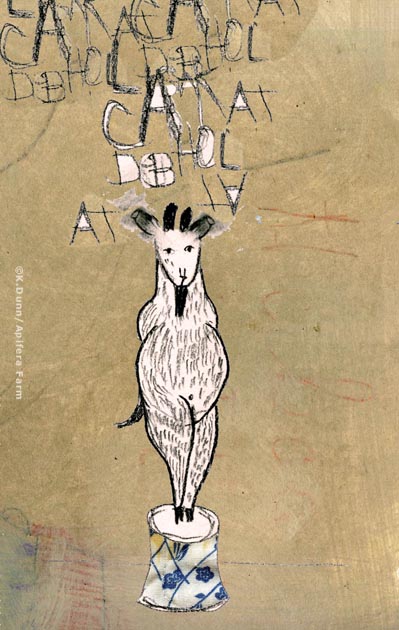 The Head Troll spent the last day standing guard over the names on the barn wall. It seems the names were written in chalk and kept getting licked off by Old Man Guinnias. This caused quite a dilemma as the names had to be rewritten on the wall, and I guess, from what I was told by Florence, all the names kept getting confused and mixed up. So finally, also according to Florence, The Head Troll ordered everyone out of the barn so she herself could write all the names on the wall, once and for all.

Being a chicken, Florence gets quite excited when procedures don't go exactly as planned. She doesn't roll with the punches well, and begins to talk herself into a series of fast clucks, making it almost impossible to translate into English. I have no idea what she was trying to tell me in the end but I did decipher that she was a bit miffed that Wilbur the Acrobatic Goat accidentally made Saturday plans - so the pillow game had to be decided today which interfered with Fig Newton Friday, a monthly get together of the barnyard to chat, cluck, gossip and eat store bought cookies [considered a rarity on the farm].

Anyway, when she finally calmed down, Florence pulled a piece of paper from under her wing and handed me the name of the person that will be adopting the art pillow. And the name was...

Thank you to everyone who played along - your compassion helped pay a big vet bill. Sadly, we lost Granny even with those efforts, but she and I gave it our best. Honey Boy and Granny are greatly missed, but we move forward with them in our hearts and memories. Everyone who played along will be hearing from someone in the barnyard...eventually. They are quite good at thank you notes - I would like to take some credit for that, as I learned it from my mother and am passing it on to them.
Posted by Katherine Dunn/Apifera Farm at 1:12 PM

Email ThisBlogThis!Share to TwitterShare to FacebookShare to Pinterest
Labels: Announcements, The Head Troll